Home Pop Culture How Does ‘Bombshell’ Compare with the Real-Life Fox News Scandal? 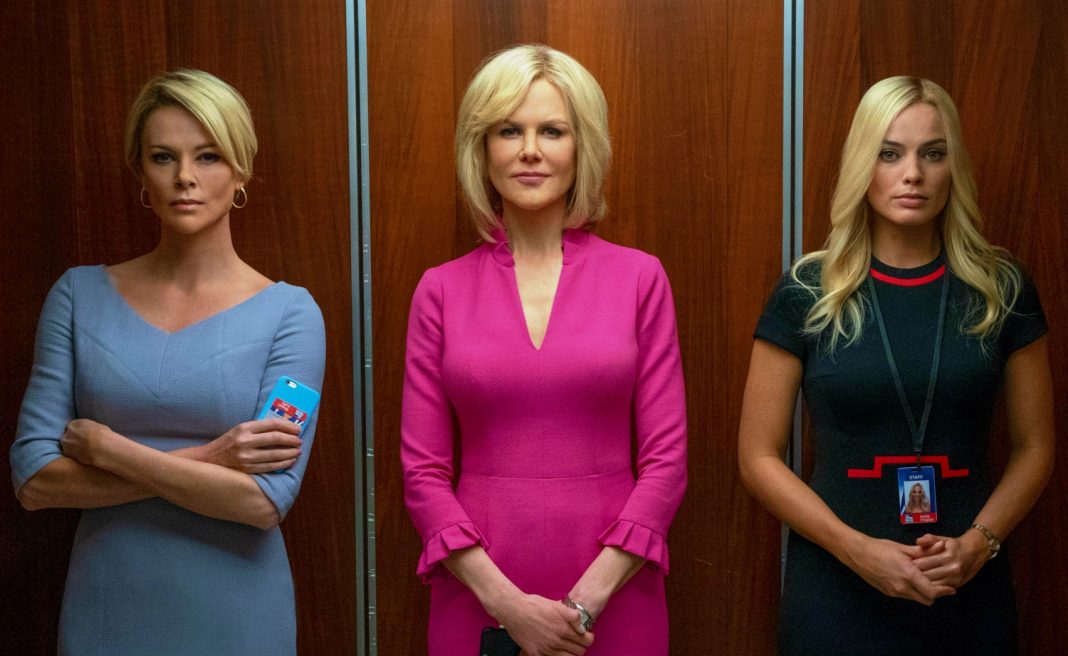 This summer, Showtime aired the seven-part miniseries The Loudest Voice, the loathsome tale of Fox News CEO Roger Ailes’s rise to power—and how anchor Gretchen Carlson brought him down when she sued him for sexual harassment in 2016. This month you can see the story all over again in Lionsgate’s big-screen, Oscar-coveting Bombshell. How do the two productions compare with each other—and with the real-life scandal? Have a look.

»Bombshell: As Ailes, 74-year-old Lithgow looks every inch the Jabba-esque, liver-spotted monster who screams when claiming alleged sexual assaults were consensual: “I didn’t always look like this!”

»The Loudest Voice: Despite Crowe’s virtuoso performance, the 55-year-old actor’s rugged visage often beams out from beneath his Ailes prosthetics like Martin Short’s thin face emerging from the foam cheeks and wattle of Jiminy Glick.

»Real Life: When Carlson’s lawsuit forced Ailes to resign in 2016, most news outlets reprinted Murdoch’s generous statement, along with Ailes’s self-congratulatory resignation letter, without remarking on the fallen titan’s appearance.

Bombshell: As played by Theron, Kelly is central to the story from the beginning, a savvy achiever who uses her contacts and spies to find Ailes’s other victims.

Real Life: One of Fox News’s biggest stars at the time, Kelly was initially silent in the wake of Carlson’s lawsuit, but it was later revealed that she’d told an internal investigation that Ailes had harassed her when she was a young correspondent.

»Bombshell: Carlson, who’s been taking notes on Ailes for a year when the film begins, establishes his character in the opening minutes, telling her lawyers, “Roger likes to joke, ‘To get ahead, you have to give a little head.’”

»The Loudest Voice: We see Carlson’s careerlong suffering under Ailes before she starts recording him on her smartphone. In the end she puts the nail in his coffin when she records him telling her, “You and I should have had sexual relations a long time ago.”

»Real Life: Carlson is lobbying Congress to end the type of secret arbitration she was contractually forced into.

Moment That Will Make You Vegetarian

»Bombshell: “Susan,” a 66-year-old woman, says that in her youth Ailes exposed himself to her when he was casting The Mike Douglas Show: “It looked to me like raw hamburger. Then he just said, ‘Kiss it.’”

»The Loudest Voice: “Carrie,” a fictional, guileless rube, tells Fox News lawyers that when Ailes exposed himself to her, “It was like raw hamburger meat. Disgusting. And he made me …”

»Real Life: A former model identified as “Susan” told journalist Gabriel Sherman that in 1967 Ailes “proceeded to pull down his pants and very gingerly pull out his genitals and said, ‘Kiss them.’ And they were red like raw hamburger.”

The Creeps Aside from Ailes

»Bombshell: Frantically loyal Fox Newser Jeanine Pirro (Alanna Ubach) tells Kelly, “Your silence is being noticed,” and says, “Does Roger want to fuck us? Yes, he’s a man. He also gives us time, opportunity. … If you can’t handle that trade-off, what can you?”

»The Loudest Voice: Fox News executive VP of programming at that time Suzanne Scott (Lucy Owen) is depicted as a hawklike menace who tells Ailes’s young victims they “have to get on team Roger.”

»Real Life: Pirro is one of the biggest stars on Fox News, especially after the departures of Carlson, Kelly, Greta Van Susteren, the disgraced Bill O’Reilly, and, most recently, Shepard Smith. Scott was named CEO of Fox News and Fox Business Network in May 2018.