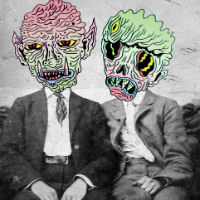 With the CMJ Music Marathon in the rearview mirror and festival season over, independent bands around the country are back in their hometowns, playing local shows, and writing new music. In Los Angeles, the end of the out-of-town distractions means a strong residency lineup for the month of November. Here’s where to go and who to see.

Night Terrors of 1927 at the Echo (November 4, 11, 18 and 25)
Fresh off of successful showcases at CMJ in October, the duo of Blake Sennett (Rilo Kiley) and Jarrod Gorbel (Honorary Title) will celebrate the release of its debut EP, out November 11, by playing four dates at the Echo. With supporting acts like Z Berg (JJAMZ and The Like, November 25) and KROQ as a sponsor, expect the shows to be packed.
Think: Dark, pretty synth-pop like The National playing a college party in a 1980s movie.
Listen: via Soundcloud

Body Parts at the Satellite (November 4, 11, 18 and 25)
The L.A.-based duo will celebrate the release of its new album, Fire Dream, on the first night of its month-long Silver Lake residency. Outlets such as KCRW and Stereogum have been covering the band pre-release.
Think: Duran Duran revivalists filtered through a New Age philosophy.
Listen: via Soundcloud

CLARA-NOVA at the Bootleg Bar (November 3, 10, 17 and 24)
The newest project from singer/songwriter Sydney Wayser does not appear to have released any new tracks—as of yet. Her Facebook page has only one song link posted: Rufus Wainwright’s NPR “Tiny Desk” appearance.
Think: Joni Mitchell backed by a computerized rhythm section.
Listen: as Sydney Wayser, via BandCamp

Lovelife and Wunder Wunder at the Bootleg Bar (November 4, 11, 18 and 25)
Lovelife has picked up some great exposure touring with The Neighborhood, in addition to playing four shows during CMJ. Meanwhile, the L.A.-based, Australia-bred duo of Wunder Wunder (formerly known as Honeymoon) have soaked up a sunny California pop sound since relocating to the southland.
Think: A slightly (but only slightly) grittier take on the pop-R&B mix of Maroon 5 (Lovelife); Casio sunshine and handclaps (Wunder Wunder).
Listen: via Soundcloud (Lovelife), via Soundcloud (Wunder Wunder)

Mars and the Massacre at Silverlake Lounge (November 4, 11, 18 and 25)
The L.A. trio promises to debut new songs along with different themes for each night of its November run. They’ll also be selling copies of their E.P. on cassette—because only full-length albums are worthy of 8-tracks.
Think: If your high school friends’ garage rock band actually had talent.
Listen: via BandCamp

Run River North at Hotel Cafe (November 6, 13, 20, 27 and December 4
The sextet prepared for this residency by taping an episode of PBS’ Artbound on November 1. Earlier this year, the band formerly known as Monsters Calling Home signed with Canadian indie label stalwart Nettwerk and sold out a gig at the Troubadour.
Think: A stripped-down, more consistently upbeat Edward Sharpe.
Listen: via Soundcloud

Spencer Day and the Budman/Levy Orchestra at Rockwell Table and Stage (November 6, 13 and 20)
The rising jazz-pop star will play the Rockwell with the big band revivalists of the Budman/Levy Orchestra. Day’s latest album, The Mystery of You, drifts between genres, effortlessly held together by his vocal charisma.
Think: The darker side of Harry Connick, Jr.
Listen: via Spotify