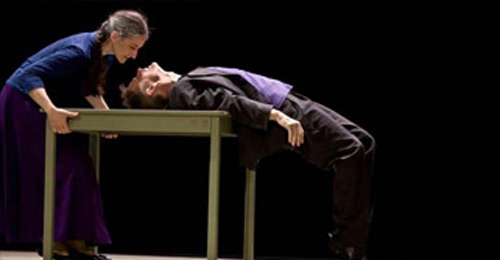 Dance fiends like me—who grew up taking lessons, appeared in productions like The Nutcracker, and dreamed of going professional—converged Saturday night at Santa Monica’s Broad Stage to see our idol: Mikhail Baryshnikov. The world-class star hadn’t performed in L.A. since 2004, and finally here he was with Ana Laguna, formerly of Stockholm’s Cullberg Ballet, in the contemporary program Three Solos and a Duet.

The intimate theater was an appropriate choice for the launch of the duo’s 2009 national tour. Baryshnikov, now 61, had all the charisma, grace, and fine technique that we remember from his performances as a young man (for reference, see 1977’s The Turning Point—and be prepared to drool). That is, he still had the ability to move charmingly, but without doing any gravity-defying leaps and turns. One of the solos, Years Later, choreographed by New York City Ballet principal Benjamin Millepied, acknowledged with humor the physical limitations Baryshnikov now faces as a dancer. For a few minutes, rather than perform, Baryshnikov stood onstage watching a film clip projected onscreen of him as a boy executing perfect pirouettes. At times he accompanied his former self, mimicking the steps—but then with a shrug of his shoulders, his head cocked, and a wry smile, he had the audience howling. It was a beautiful shared moment between Baryshnikov and his admiring public, and the message was clear: What once was is no longer, and life goes on.

The three other pieces of the evening had a more depressing feel, which is unfortunate considering how elated we were to be there. Alexei Ratmansky, former artistic director of the Bolshoi Ballet and now artist in residence with American Ballet Theatre, choreographed the brief Valse-Fantasie, in which Baryshnikov used traditional ballet mime to tell the story of a composer’s love for a woman and his ultimate change of heart. Choreographer Mats Ek, who is Laguna’s husband, arranged Solo for Two (in which Baryshnikov made a fleeting appearance in the tale of a woman gone mad with loss) and the powerful duet Place (which depicted a couple’s relationship as it evolved from youth and joy to strain and pain). And yet Baryshnikov had us on our feet at the end, a standing ovation.

It was a thrill to see such a talented artist up close. Ladies, he’s still got it.