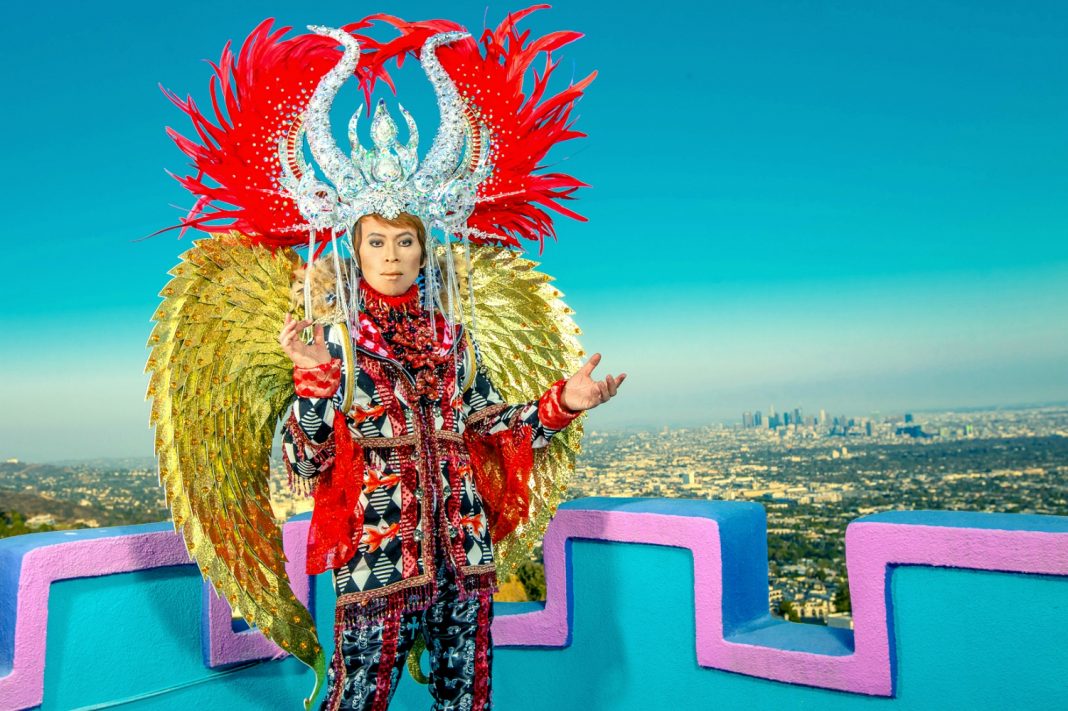 Bobby Love lives next to a castle in Laurel Canyon. When he went next door to meet his new neighbors 18 years ago, he fell in love with the over-the-top world of the Flying Morgans, a family of high-flying acrobats who seem to have dropped in from an Italian Commedia dell’arte. “They bring out the artistic side of me,” Love says. “They’ve always encouraged me. Bonnie (Morgan) is like my muse.” Love was so enchanted that he began to design his own collection of outrageous attire he wears to a series of “fantasy balls” that take place about once a month around Los Angeles.

This weekend, Love will attend the Labyrinth Masquerade. “About 2,000 people pack into the Biltmore Hotel for that,” he says. “Then there’s the Edwardian Ball, the Pirates and Mermaids Invasion, and I go to the Renaissance Faire at least three or four times.” Twice a year, Love travels to Hong Kong with custom-printed fabric, trim, beads, feathers, and accessories and explains his vision to a tailor he contracts with there. Then it’s off to Thailand to collaborate with a master hat maker about his ideas for themed headgear that enhances his themed fashion collections: circus, jesters, ancient Egypt, a “four seasons” suite as a tribute to his favorite designer. “I’ve been drawn to the work of Erté since I was a teenager because it’s so intricate,” he says. “He’s best known as the father of Art Deco. I’m also inspired by the Art Nouveau master Alphonse Mucha, and Salvador Dali.”

In addition to the ball scene, Love will occasionally walk a fashion runway for friends, but he has never sold any of his creations. “I have the luxury of not doing this as a business, I do it as a passion so I don’t care if people like it or not.” He says. “I’m kind of like Batman. I have a day job, but I’m a designer by night.”

Love typically wears his creations once or twice before they go into storage. Partygoers would probably remember if he wore a gigantic chapeau inspired by Audrey Hepburn’s My Fair Lady ascot dress with a bouncing pirate ship sticking out of the top more than once. The hat with the rhinestone-studded model of the Starship Enterprise might also stand out if worn multiple times. He would like to see the menagerie of more than 100 costumes end up at a museum like the Fashion Institute of Design & Merchandising or the Los Angeles County Museum of Art, but for now the pieces are still available for his next fashion show—or run to the supermarket.

“Sometimes I wear plain clothes so I won’t be recognized. I wear Harlequin pattern pants, one of my coats, and maybe a top hat,” he says. “I wear my casual collection to the theater. I don’t want to stand out too much.”

Bobby Love’s tailor and milliner are overseas, but here are some of his favorite L.A. shopping destinations: