Bob Saget, the beloved LA-based actor and comic who starred in such hits as Full House and America’s Funniest Home Videos was found dead on Sunday in his hotel room in Orlando, the latest stop in his stand-up tour. He was 65.

Saget was found unresponsive in a hotel room at the Ritz-Carlton Orlando on Sunday afternoon. He performed his stand-up comedy act Friday night at Hard Rock Live in Universal CityWalk Orlando, at what proved to be his final act on Saturday night in a concert hall in Jacksonville.

Earlier in the week, the funnyman of Full House and America’s Funniest Home Videos fame had embarked on a tour of Florida cities, in anticipation of a new comedy special.

Full House co-star John Stamos was among a slew of Hollywood stars who paid tribute Sunday to Saget, writing that he was “broken” and “gutted” and “in complete and utter shock.” “I will never ever have another friend like him. I love you so much Bobby.” Similar eulogies poured in from TV and comedy greats like Norman Lear (“Bob Saget was as lovely a human as he was funny.”) and Billy Crystal (“A great friend and one of the funniest and sweetest people I have ever known.”).

Saget is best known for his role as Danny Tanner, the wisecracking father who was left to raise his three young daughters on his own after the sudden death of his wife, killed by a drunk driver. Before smash TV success, Saget was part of a brilliant generation of young stand-up comics alongside the likes of Jerry Seinfeld, Ellen Degeneres, Sam Kinison, and Andrew Dice Clay. Early exposure came on HBO’s 9th Annual Young Comedians Special hosted by Rodney Dangerfield. “I need you to like me real bad,” the 28-year-old Saget told the audience in 1984, “‘Cause I have no act and I have no life and I have no future.”

Something about the trials and pain of the COVID-19 pandemic turned Saget prolific. In the early days of the shutdown, he put out “Bob Saget’s Here for You,” an entertaining podcast in which he interviews other famous comedians, including Jason Sudeikis, Whoopi Goldberg, Tiffany Haddish, and Margaret Cho. But it wasn’t until being invited by Dave Chappelle to perform at a socially distanced show in Yellow Springs, Ohio, nine months into the pandemic, that Saget shook off the cabin fever and rekindled his passion for stand-up.

He had embarked on a coast-to-coast stand-up tour that over the next eight weeks was supposed to take him from the Florida Atlantic coast to performances in Oklahoma City, Tacoma, Washington, and Honolulu. He said the impulse for him to tour came in response to what he found was too much negativity in the world. “I’m like the Blues Brothers when they would knock on the door and go “We’re on a mission from God. I just wanna make people have a good time and have a good night out,” he told News 4 Jacksonville, in what may have been his final televised interview.

“I don’t talk politics, I don’t talk religion, I just want to make people laugh,” Saget said of the purpose behind his shows.

COVID restrictions on venues for live comedy being what they are in California, Saget had resolved to take his show anywhere he could draw an audience. The versatile comedian also shined in offbeat roles on HBO’s Entourage, the Chappelle stoner comedy Half-Baked, and as the voice of narrator Ted Mosby on the CBS sitcom How I Met Your Mother. He won a Grammy Award for Best Comedy Album in 2014.

Saget graced the cover of our LA Magazine Best of LA of 1990. He had been performing standup over a career in comedy, spanning 40 years. He is survived by his wife Kelly Rizzo and his three daughters—Aubrey, Lara, and Jennifer—who he shares with first wife Sherri Kramer. 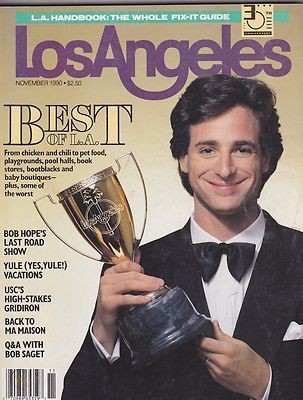 Gilbert Gottfried: My Bob Saget Murderer Joke is Not a True Story