These seven Los Angeles creatives are shaking up and sometimes blurring the lines between art and design with innovative seating, lighting, and (sometimes anthropomorphic) storage solutions.

Growing up in blue-collar Cleveland, Vincent Pocsik remembers his father crafting a canoe (that he never actually put into the water). So when a creative consultant in the Arts District approached him a few years ago about making some furniture for his office, he accepted the challenge on one condition: I do it my way. In the years since, his hand-tooled, anthropomorphic walnut lamps and totems sprouting ears, legs and hands have been shown around Los Angeles by John Wolf, Kyle DeWoody, and West Hollywood’s M+B gallery. Now, a giant eight-by-eight foot cabinet for curiosities in the shape of his head Pocsik-sized legs is the star of Cabinet Is Me, Pocsik’s New York solo debut—also featuring a “listening wall” and a two-tiered dining table supported by what appears to be a hip bone—up through December 16 with Shanghai’s Objective Gallery. “I think of it as a sculpture,” says Pocsik. “Where the function is part of the art.” vincentpocsik.com 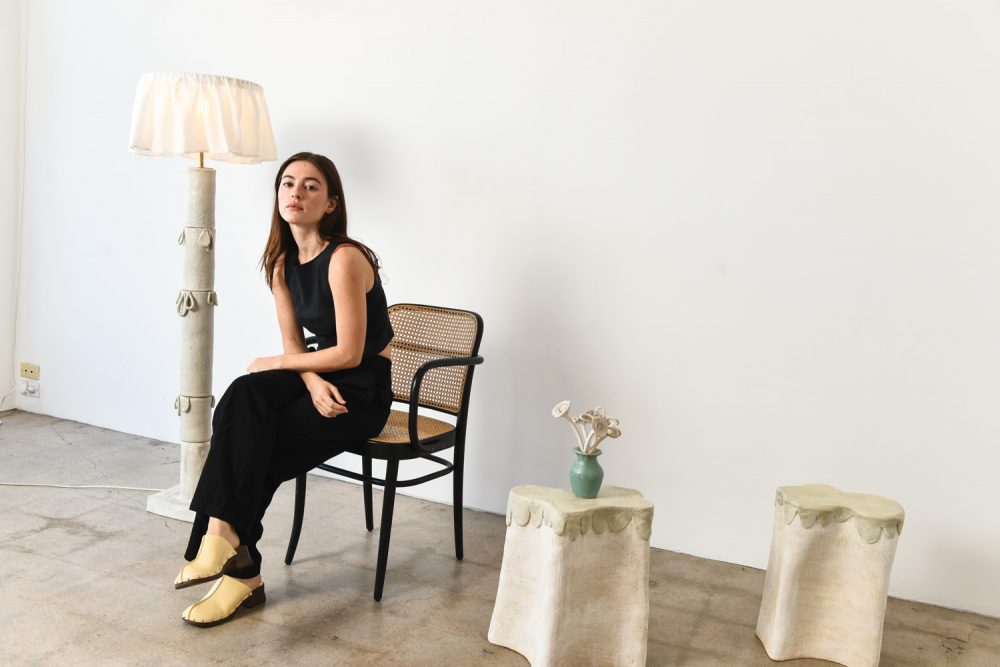 Analuisa Corrigan comes from a long line of New York stagehands—her late father was the technical director for Alvin Ailey—so it was no surprise when the 27-year-old Parsons grad got her hands dirty during the pandemic. She kick-started a ceramics career by selling ashtrays with paintings of insects and coffee mugs with huge extended handles. Today, her organically shaped lighting is sought after by top designers like Jeremiah Brent, and this summer, the buzzy Miracle Mile gallery Stroll Garden let her make a ceramic living room for a show featuring whimsical domestic objects as an homage to the TV room in her great aunt’s Tijuana home. Though Corrigan almost canceled the show after the first version of her 60-pound ceramic chair broke, she pushed through and a blue-chip collector acquired the piece, giving her the confidence to go deeper down the Duchampian rabbit hole. “I really want to make a urinal and a toilet,” she says. analuisacorrigan.com 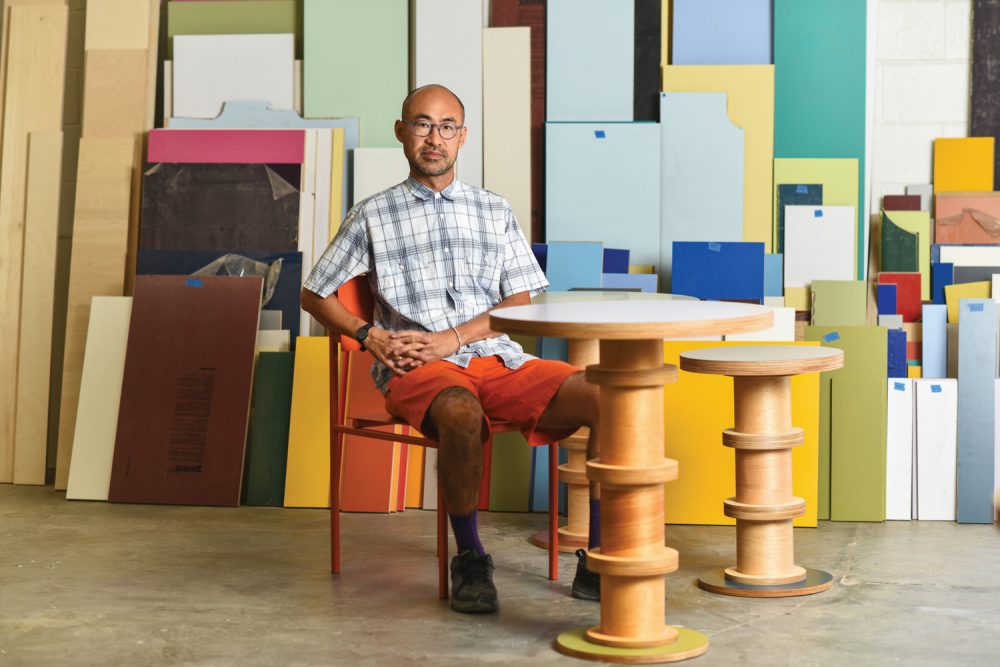 In 2009, when his then-girlfriend Kristin Dickson-Okuda needed some furniture for an event at her store, Iko Iko, Shin Okuda made a few seating elements and suddenly started receiving commissions for desks and guitar stands. He discovered a brand name after hearing the Fela Kuti song “Waka Waka” and what began with orders for five of his cylinder back birch chairs per year grew to a wide-ranging collection featuring stainless steel and laminates in a rainbow of colors that are only available via commission. A hit amongst art world machers, you’ll find his designs in the Burbank studio of ceramicist Bari Ziperstein and the arts non-profit Murmurs. He also launched a new vertical dresser with a seating element at Brain Dead Fabrications and Tokyo’s Uneven Hub Store this fall. With a new space in Glendale almost twice the size of his former Frogtown digs, Okuda, who once ran Jorge Pardo’s woodworking operation and still cuts every piece of lumber himself, is ready to design tomorrow’s classics. “I have to make a new challenge,” he says, “For myself.” wakawaka.world 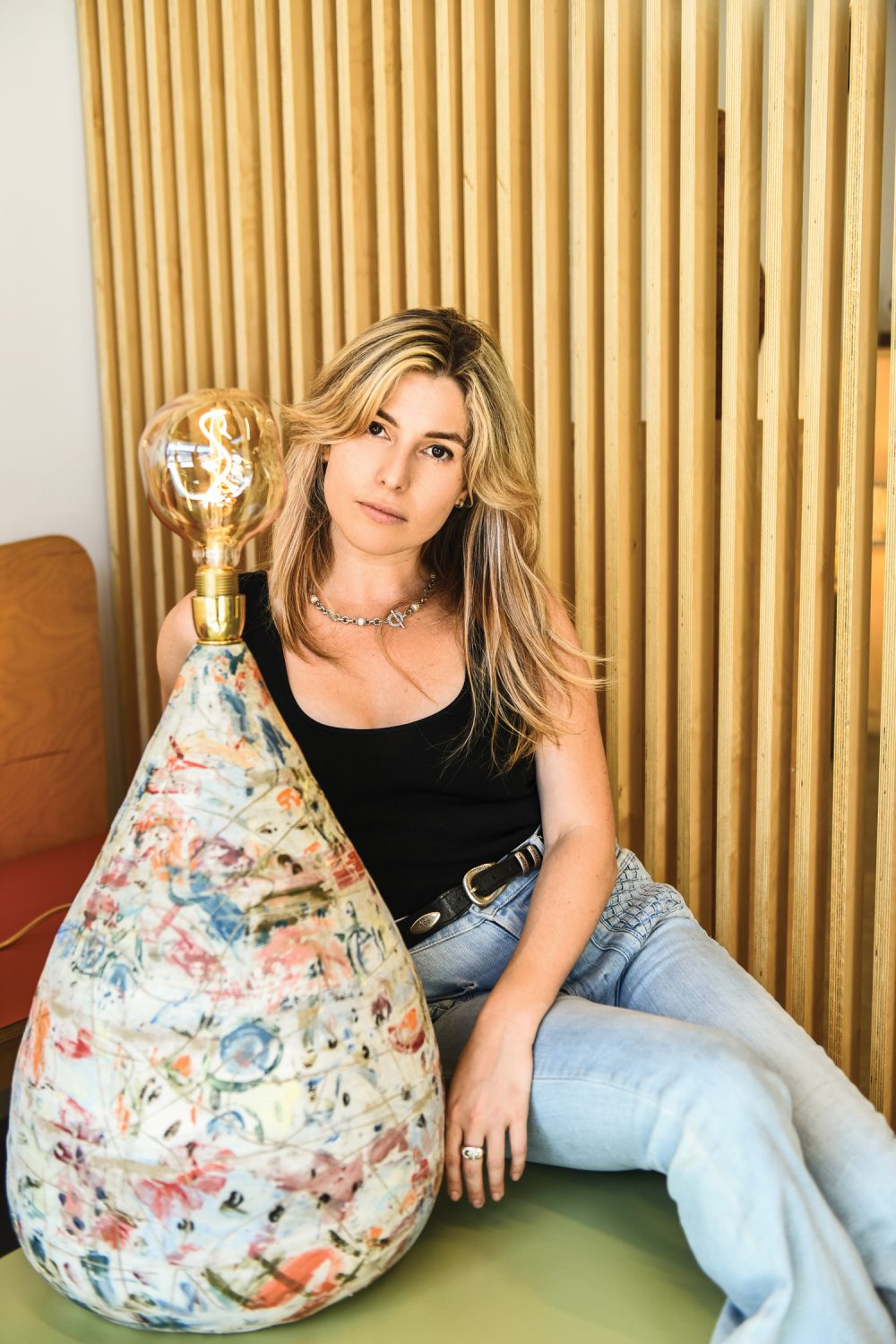 Lauren Elder was studying new media at the Art Institute of Chicago when she took a ceramics class her last semester and, she says, “I was just hooked.” What started with massive sculptures evolved into more functional objects—vases, dishes, bowls—embellished with narrative sgraffito carvings depicting feminist tropes with icons from her Iraqi and Scottish ancestry. At her solo debut with Wilding Cran Gallery this summer, it was two tear-shaped lamps that caught the attention of design luminaries Thomas Lavin and Kelly Wearstler. To bring these organic shapes to life Elder, 32, collaged abstract paintings onto her coil-built forms via small pieces of newsprint marked with underglaze. “I transfer them on like a temporary tattoo,” explains Elder, who is already busy creating more narrative lamps depicting a day in her life or one in Rat Pack-era Palm Springs and others in the form of female torsos. “I’m really interested in more storytelling.” Laurenelder.net 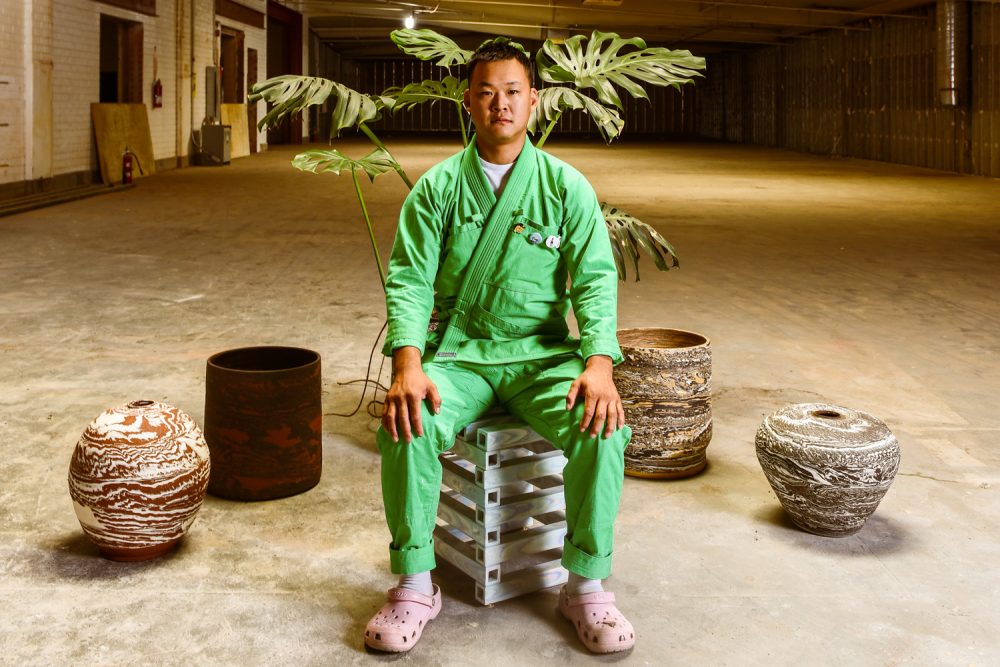 Henry Kim was a senior at the University of the Redlands when he got recruited to work in the Haas Brothers’ ceramics studio, where he spent the next decade creating the processes for some of the most innovative (and collected) ceramic forms in recent art history. During the pandemic, however, Kim went off on his own to develop the “Monggi” process which blends Korean Onggi techniques with psychedelic marbled clays behind his Toobiture collection of seating and tables. A fateful lunch with clay master Hun Chung Lee—who told him “Only fill your kiln halfway with stuff that makes money; the other half you fill with your dream”—got him thinking about larger projects like a Toobiture house and a new line of planters that don’t have any glaze, which he plans to include in a solo show with La Beast Gallery opening November 12. “A lot of my work is about juxtaposition,” says Kims “It’s about chaos and control; traditional techniques and modern applications; being Korean and American.” hyunuko.com 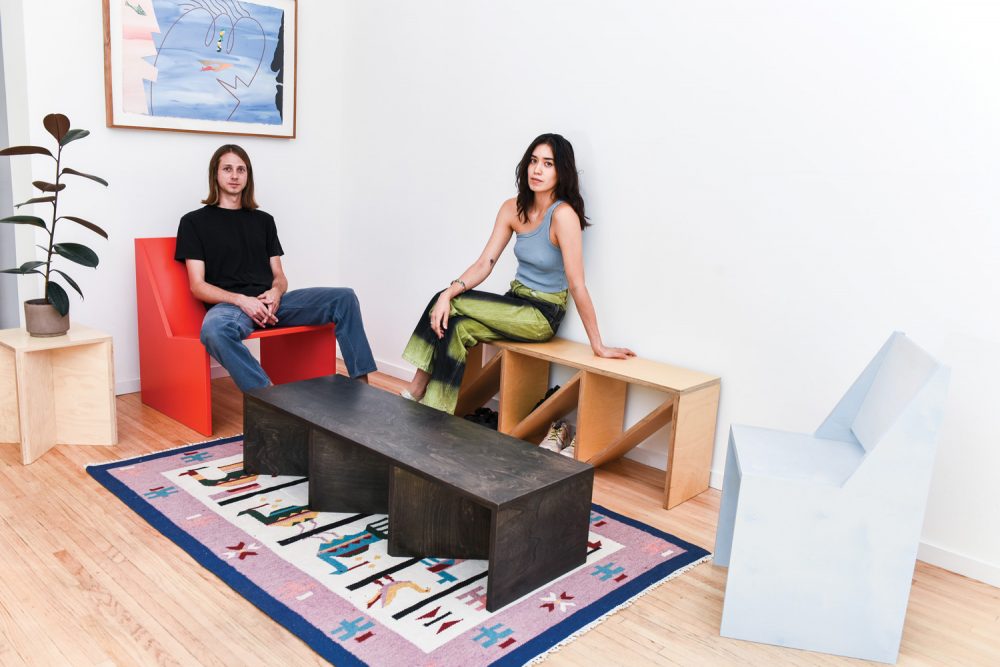 As creative couples go, Sara Lee Hantman and Coley Brown were doing just fine: She was the gallery director of VSF; he was successfully self-publishing photo books and getting his work into The Atlantic and New York Times. But when they bought a fixer-upper in Altadena right before the pandemic, they realized they didn’t have the money (or interest) to buy furniture that didn’t exactly fit their tastes. What started with a few chairs and benches for the living room that incorporated clean lines, zig-zagging profiles, and storage has morphed into Prisma Studio, a go-to basics line for the art crowd: Matthew Brown just got an executive table for his ascendant gallery. With a new 1500 square-foot Gardena studio, the duo is working on a seating collaboration with textiles from Brain Dead Fabrications and a Design/Miami booth with Stroll Garden where they’ll debut a new suite of knife-edge tables and lamps (made from upcycled off-cuts) whose profiles are meant to mimic the Sierras. prisma.place 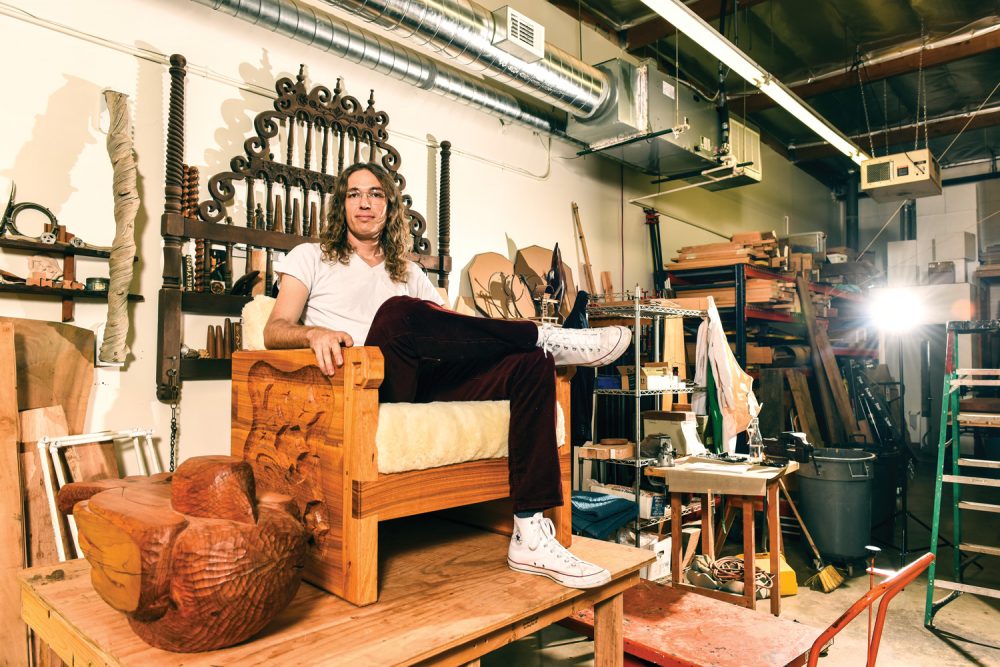 Cooper Union trained painter Nik Gelormino always liked working with sculpting tools, but after a 2016 class at Tortoise General Store with the “wood sage” Yo Takimoto, he jumped back into woodworking full time and even started a side business, Another Good Job, to handle commissions. His early pieces, all of which were built from solid specimens and traditional joinery, were “more straight, mainly because people are square and don’t want to take risks, so I had to start making my own stuff to kind of show them what I was capable of,” says Gelormino. Now, in any given week inside his Alhambra studio, you might find him acid-etching magic mushrooms into brass door hinges or carving away at a block of Himalayan deodar cedar salvaged for a sculpture of a car that might double as a side table. A selection of the latter will form the basis of a 2023 solo show in Tokyo at Curator’s Cube. “I want to make works that render the line between function and art irrelevant.”

In the Market for Vintage Furniture? You’re in the Right City