Home Film Why a Photo of Black Creatives at a Black Panther Screening... 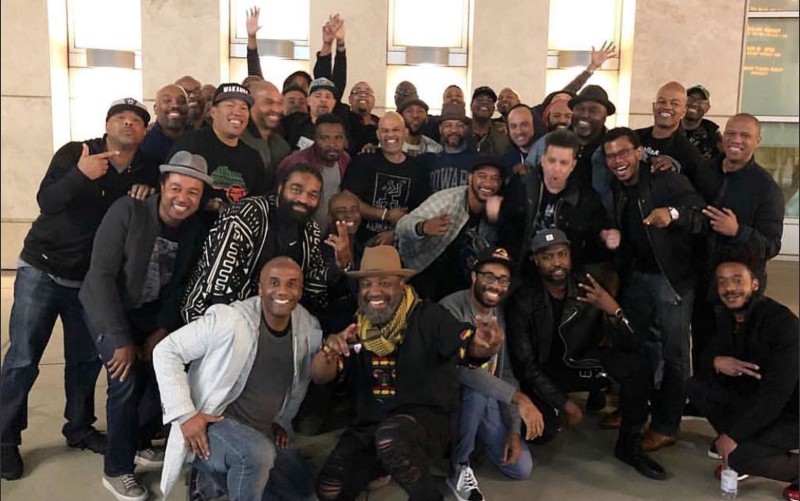 After a Thursday evening screening of Black Panther at ArcLight Hollywood, a group of guys gathered outside the theater to take a photo. It’s a pretty great image—everyone smiling big, riding the high of watching the rare superhero movie that’s been almost unanimously liked—but the caption accompanying the photo on social media is what grabbed people’s attention.

Posted to Facebook, Twitter, and Instagram by screenwriter and comic book author Brandon Easton, the photo captured more than two dozen men of color, all of them Hollywood screenwriters and showrunners. The text, as it was published on Facebook, reads:

#BlackPanther at the Arclight Hollywood last night. Every brother in this photo is a screenwriter of movies and/or television. There are Oscar nominees and acclaimed showrunners representing.

We are often told that people like us don’t exist. That we don’t achieve, that we don’t accomplish. The truth is that writers aren’t always on red carpets or at parties. We CREATE. And the act of creation means we have to be invisible sometimes.

This is our excellence. This is what it looks like.

Since it was posted last Friday, the photo has been liked thousands of times and shared hundreds more on each platform. It was the first time anything Easton’s put on social media has gone viral, and he suspects he knows why. Speaking over the phone after an appearance on the podcast Screenwriters Rant Room (to talk about Black Panther), Easton says, “Many people don’t believe that black men are writers and creators. Even though we have our issues with racism in the industry, there are people who’ve succeeded. For a lot of people, it’s probably the first time they’ve seen black male screenwriters, like ever, besides Spike Lee and John Singleton.”

He continues, “People don’t know there are black male showrunners, black men and women who write TV and film. [These are] regular guys who are talented and had a dream and went for it, and I think it sent shockwaves…to see black people doing positive things in the industry.”

If the photo’s success is that it reframes traditional narratives about black men, so too is Black Panther‘s. “It doesn’t have black pathology,” Easton says. “That’s where it really hits the home run.” As he puts it, it’s not a fear-based narrative.

According to Easton, black people on TV and in movies are often presented in the context of a problem. They’re criminals or broken or products of bad upbringings. “I’m from Baltimore, so people always bring up The Wire,” Easton says. “It would be like always talking about Boyz n the Hood when you talk about L.A. We’ve been always framed from a  perspective of pain, sadness, and hurt. I grew up during the crack years, and I had a pretty decent upbringing. It was not nonstop suffering—it wasn’t like that.”

And men of color aren’t the only ones who fall victim to Hollywood’s tendency to rely on stereotypes as narrative shorthand. “Most women I know don’t act like the women we see on TV and in movies,” he says. “Wonder Woman gave agency to a woman hero and Black Panther gave agency to black character who didn’t have to be defined by something negative.”

At least part of the solution, of course, is having people who belong to the demographic they’re presenting being given license to create more accurate representations. Black Panther was directed and written Ryan Coogler, along with co-writer Joe Robert Cole, both black men. According to the L.A. Times, the film raked in $235 million over the holiday weekend in the U.S. and Canada alone. Worldwide, the total was $404 million.

“You have executives in power who don’t understand the people telling the stories because they didn’t grow up around blacks,” he says. “I think Black Panther, the story they chose to tell, could only be told by African-Americans.” Which is where Easton and his colleagues come in.