Home Uncategorized Bjork on the Big Screen—Voltaic at The Montalban 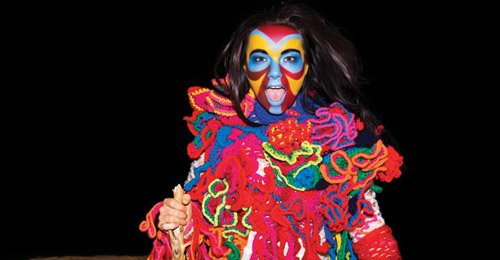 Bjork’s forehead was the first thing I noticed: a swath of colors, the paint stops right above the bridge of her nose. Next, I fixated on her eyelids, painted black, framed by jet-black hair. Wearing a multi-colored robe and black tights, the singer could’ve easily been confused for a wild bird or a tribal warrior, cavorting barefoot on stage. But from my seat at Nike Sportswear’s The Montalban Tuesday night for the Flux-curated screening of Voltaic, she reminded me of a volcano, slowly building up from a mild rumble to a full-blown eruption of color and sound.

I’ve never seen Bjork perform live, but the film (which documents her Paris and Reykjavik shows during her two-year “Volta” tour), is the next best thing. Fantastically weird and magical, Bjork opened her Paris Olympia show with the primitive clangor of “Earth Intruders,” her piercing cries accompanied by an all-female, 10-piece brass section, all blaring trumpets, trombones, and French horns. The Parisians caught on tape were enthralled, and watched with severe reverence as Iceland’s most famous export made her way through “Wanderlust,” “Vertebrae by Vertebrae,” and “Hunter.” Flashing her teeth, grinning mischievously, and at one point even curtsying, Bjork enjoyed herself. After each song she said, “Merci!” with the proud gusto of a child licking a plate clean.

“Just one more song so we can all go to sleep,” she said before an encore performance of the revolution-fuelling “Declare Independence.” “Raise your flag! Higher, higher!” she yelled. The clapping and singing grew louder. From which side of the screen, I couldn’t tell.

Voltaic will be released on June 30 by Nonesuch Records.