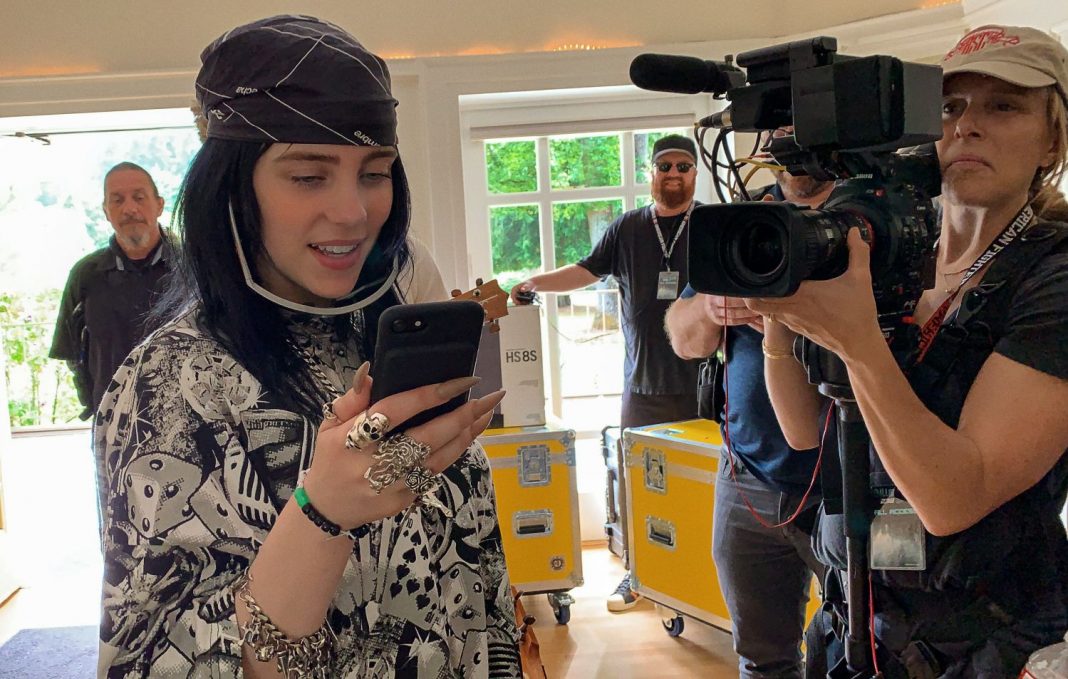 There’s a line in the Justin Bieber song “I’ll Show You” that says: “My life is a movie and everyone’s watching.” That song was released when Billie Eilish was 13 years old, but the lyrics already applied to the then-burgeoning superstar. In fact, the new Apple TV+ documentary Billie Eilish: The World’s A Little Blurry (out February 26) is so rich with footage of the now-19-year-old Eilish, it’s a bit like Billie got the Boyhood treatment.

The film’s focus is the creation of Eilish’s breakout debut album, When We All Fall Asleep, Where Do We Go? and the global domination that resulted. Fans are familiar with the story of homeschooled siblings Billie and Finneas cowriting the album in the latter’s bedroom in their parents’ Highland Park home. But witnessing the creation of the album, observing the dynamic between Eilish and her now-23-year-old brother, and getting glimpses of the artist’s notebook of ideas—which come to fruition on the album—is an entirely different experience.

“There were two things going on,” says R.J. Cutler, the film’s award-winning writer-director (Belushi, The September Issue, The War Room), who is also one of its producers. “There was a GoPro on a tripod in the bedroom and if the kids felt inspired, they turned it on. And they turned it on a lot. If there was a meeting or a conversation or a song, their mom would turn on her iPhone and film. She’s seeing things only a mom can see and you’re getting this remarkable mother’s perspective. The other thing that was going on is Billie is born in 2001 and like everyone else born that year and onward, on some level, her whole life is documented. It was a rich opportunity for us filmmakers.”

Cutler and his small crew began filming at the start of 2019 and stopped the cameras after Eilish and Finneas swept the Grammys in 2020. At the very first meeting with Eilish and her team, Cutler recalls “a houseful of clothes and gifted sneaker boxes and a backyard with a trapeze.” What he proposed was a pure cinéma vérité approach: an observational lens, storytelling with no filter, filming performances as intimately as possible. Eilish said she wanted the film to feel like The Office, where characters made eye contact with the camera during key moments.

“Billie was born in 2001 and, on some level, her whole life is documented.”

What The World’s A Little Blurry delivers is a deeply personal look into Eilish’s universe. The film never feels scripted, even when Eilish is looking down the barrel of the camera and speaking directly to the viewer. What you come away with is a clear portrait of a hyper-creative and hyper-talented young visionary, who is also still a vulnerable, breakable young person, albeit one who’s mature beyond her years. Eilish doesn’t shy away from the cameras when she’s dealing with a problematic (now ex-) boyfriend who pays very little attention to her; when she’s let down by what she considers a sub-par performance at Coachella; when she’s having a severe onset of tics due to her Tourette syndrome; or when she reveals the pain she inflicted on herself when she was younger.

“Trust is an extraordinary gift,” says Cutler, who had final-cut approval. “And it’s not a gift you earn once. What you earn day one is the opportunity to shoot day one. But you’re earning trust with every encounter and a relationship develops. Nothing’s happening that wouldn’t be happening if we weren’t there. We didn’t do sit-down interviews. We made a movie in which the raw materials were Billie’s life, which is incredibly liberating and thrilling and cinematic and emotional and dramatic and character-driven. I like to say it’s just like a real movie.”

Cutler and his team ended up with hundreds of hours of footage—not counting the home movies that were incorporated. The first edit was over 24 hours long and took a week to watch. The finished version, according to Cutler, “is not a whole lot different.”

He continues, “People who have seen the film tell me that a couple of days later they find themselves missing Billie. Vérité thrives because humans like their stories told. When you have someone like Billie, it’s awesome, because she’s got that directorial instinct and she welcomes you. She knows who she is, and that’s what you see.”