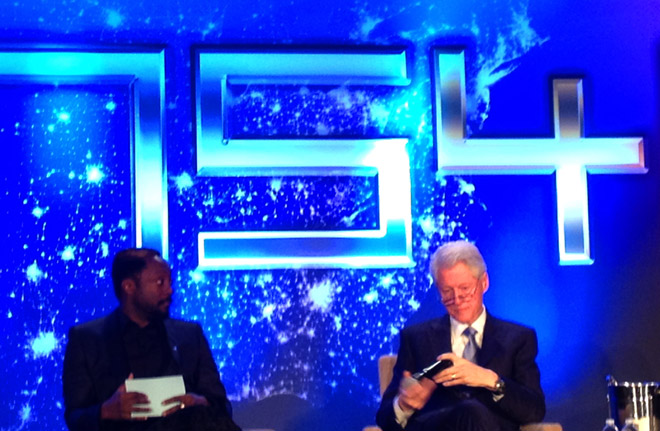 Rock stars have plenty to brag about but only will.i.am of the Black Eyed Peas can say his song is literally out of the world. “Reach for the Stars,” made history by becoming the first track to be played on Mars through NASA’s Curiosity Rover. Now will.i.am continues to push boundaries closer to home—and he’s doing it with help from a different kind of star, former President Bill Clinton.

The annual Trans4m conference, which opened yesterday at the California Science Center, was hosted by will.i.am’s i.am.angel foundation. Harkening back to his roots in Boyle Heights, the foundation works to transform communities by focusing on wellness and implementing STEAM. The program works in conjunction with Discovery Education to improve the ways children learn in school.

will.i.am, who donned a black monotone suit with gold-plated sunglasses, provided the cool while Intel futurist Brian David Johnson was the “geeky” counterpart who curated the conference. Their riffs on stage were light-hearted, but the message was clear: “We need to educate to innovate,” said Todd Park, the country’s Chief Technology Officer, adding, “May the force be with us.” (No geek fest is complete without a Star Wars reference.)

The conference was split up into panels and featured a plethora of panelists including Dean Kamen, who will.i.am described as “today’s Edison.” All the panelists have colloborated with the foundation on improving and/or implementing STEAM into school. Each panel included students from Roosevelt High School in Boyle Heights from the i.am.College Track program. They echoed the need for computer science and art courses—and better school lunches. A highlight was one seven-year-old girl who came on stage holding onto a stuffed animal while introducing the will.i.am-inspired game she coded. The audience cheered when will.i.am, in awe of her skills, prompted her to be his “teacher.” His lack of technological know-how was the conference’s running joke. At one point he suggested perhaps babies were gestating with iPads in the womb.

The day culminated with the most anticipated moment of the conference, a keynote speech by Bill Clinton. Sprinkled with humorous anecdotes including how he felt like the kid from Home Alone when Hillary got the “travelling job,” he said her absence inspired him to learn more about science, a lifelong passion. Clinton’s speech touched on a variety of issues, but he focused on the need to fix how schools teach different subjects by underscoring the importance of the arts and sciences.

The conference closed with will.i.am reiterating the goals for Trans4m: “Kids are the architects of the future. We need to give them the tools to design their tomorrow to be different than their predetermined future.”

5. will.i.am on Waiting For Superman, the film that inspired his efforts:
“I knew my neighrborhood was bad but I didn’t know it was that bad… maybe I can be a superman. Let me transform myself to accept the responsibility for why my neighborhood is that way.”

4. will.i.am on change:
“Whether Paul Revere was a real person or a metaphor, he came yelling the “British are coming,”… well innovation, change, opportunity, transformation are coming and here’s how to do it. Boo ya.”

3. Leland D. Melvin of NASA on equality and justice:
“Equality is not justice. We need to make sure every kid gets what they need, it’s not going to be equal cause there might be a little more for others but if they get what they need they can compete on any sphere on this planet.”

2. Bill Clinton on kids who grow up in tough neighborhoods
“A lot of them are unusually alert to their surroundings at a very young age. They are born for science…the obervational powers they need to survive on the streets are the same they need to apply in class.”

With Public Schools Closed Until at Least January, Superintendent Austin Beutner Lashes Out