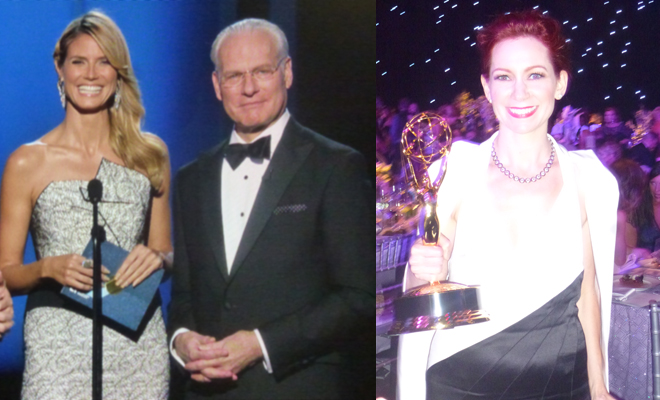 The Creative Arts Emmys, which dole out several behind-the-scenes awards, were handed out last night at the Nokia Theatre in downtown. HBO ruled the night, collecting 20 awards, eight of which went to the Liberace biopic Behind the Candelabra starring Michael Douglas and Matt Damon. The film will also be up for seven more awards next Sunday, September 22, at the Primetime Emmys.

The HBO series Boardwalk Empire came in behind Behind the Candelabra with four Emmys, and tied with the 66th Annual Tony Awards, which also won four. Tony host and producer Neil Patrick Harris was there to accept the award. As a precursor to hosting the Primetime Emmys next week, Harris also presented the evening’s final two awards: Outstanding Reality Show Host, which went to Heidi Klum and Tim Gunn for Project Runway, and Undercover Boss, which won for Outstanding Reality Program. CBS, which airs Boss, had the second largest number of total wins after HBO, with 15.

At age 84, TV veteran Bob Newhart finally took home his first Emmy for his guest appearance as Professor Proton, the retired host of a children’s science show, in The Big Bang Theory. The audience gave him a standing ovation when he accepted his award, and the producers kindly gave him more than the requisite 45 seconds at the microphone, something they’d been brutal about during the more than four-hour show. Newhart has been nominated six times but until now hadn’t taken home a statue.

The Academy of Television Arts & Sciences awarded three other guest appearance trophies last night: to Melissa Leo for her role as Laurie in the FX comedy Louis, to Dan Bucatinsky for playing the journalist and stay-at-home dad James Novack on Scandal, and to Carrie Preston for her brilliant turn as the odd but effective lawyer Elsbeth Tascioni on The Good Wife. Among her appreciations, Preston thanked her True Blood family for turning a blind eye while she carried on an affair with the Good Wife. Bucatinsky tearfully thanked both his on-screen husband and his real-life husband, then, wondering aloud how many men are able to say that, proceeded to thank the Supreme Court for their recent ruling on gay marriage.

Triumph the Insult Comic Dog gave one of the most entertaining performances of the night, telling off-color jokes and frequently dropping his cigar before presenting the award for Outstanding Voiceover to Lily Tomlin for the HBO Family film An Apology to Elephants. While accepting, Tomlin looked warningly at Morgan Freeman, there for a production nomination for Through the Wormhole, and said, “This is for narration, so just stand back.”

Robert Smigel, the creator and HUMA (hand up my a**) behind Triumph, took home an Emmy for executive producing the Outstanding Interactive Program, Night of Too Many Stars, benefitting autism research. Smigel also had an awkward moment in front of the mic as the “shut up and get off the stage” music began playing, asking for more time but not realizing when it was given to him.

The time limit on acceptance speeches caused a few issues for award winners, as producer Spike Jonze Jr. warned everyone at the start of the show that they would have only 45 seconds—including the time to get from their seat to the stage. As the winning art director for MasterChef said as he breathlessly reached the stage, “Just like producers to give you one fifth the amount of time you need to get the job done right.” It got a little ridiculous as some women ran to the stage barefoot so as not to be slowed down by their high heels. Yes, it’s a long show, but would it have made that much difference to allow a few more seconds for people to gracefully reach the stage? Bonus style points go to the leader of Boardwalk Empire’s sound editing team; he strolled down the aisle in a red bow tie, looking like he had just stpped out of Reservoir Dogs.

The Academy presented its Governors Award to June Foray for her almost seventy-year career in voiceovers. The actress, who turns 96 this week, voiced many recognizable characters, from Natasha Fatale and Rocky the Squirrel in The Adventures of Rocky and Bullwinkle to Witch Hazel in the Buggs Bunny cartoons, to Cindy Lou Who in How the Grinch Stole Christmas. She also received a standing ovation as she accepted her award.

Props go to James Lipton of Inside the Actors Studio for his wonderful speech upon accepting the win for Outstanding Informational Series or Special, which tied with Anthony Bourdain: Parts Unknown. “You have honored a school,” he said, “and I think that’s wonderful.” He also thanked his wife of 43 years for doing him “the small favor of redefining the universe.”

The Creative Arts Emmys will be telecast on Saturday night, September 21, on the new FXX channel.