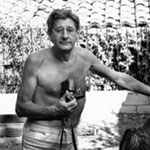 Look for local sites at Helmut Newton, the first major museum show for the fashion icon. It opens tomorow (June 29) at the Annenberg Space for Photography.

“Renata Pompelli, Pacific Palisades, California,” 1990
A nude woman stands amid shrubbery, with the Santa Monica coastline as a backdrop.

“Untitled,” 1985
A shirtless Newton poses with his trusty camera at the Chateau Marmont, where he would die in a car crash in 2004.

“Miss Longwell, Sherman Oaks, California,” 1992
A model in a bra goes bottomless in the yard of a tract home.