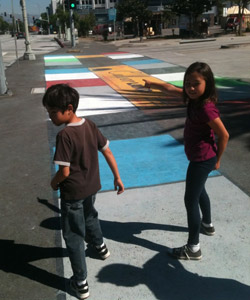 While I generally consider myself a mature 25 year-old, I have to admit I was intrigued when I heard about Culverland, the new art installation/life-size game board in Culver City. I went to check it out over the weekend and I’ve gotta say, it did bring out my inner child.

Part of the Art in Public Places Program, Culverland is a 90 by 18-foot installation on the corner of Main Street and Culver Boulevard, a location that gets lots of passersby (a hotel, movie theater, shops and restaurants are all nearby). The art concept is simple: painted squares on the sidewalk replicate a board game just like Candyland (it even includes the game rules near the start square), only each person is their own game piece, and for once traffic is a plus.

Let me explain. Each player chooses one lane of surrounding traffic to watch and moves forward by a finding a passing car that matches the next colored square.

I wasn’t sure how popular this art installation would be on a balmy Sunday afternoon, but quite a few people passing by stopped to play (several others walked on by, oblivious). A handful of people took on the challenge during my half-hour visit, but only three college-aged girls played the game from start to finish. It took them about 20 minutes to complete, but they were focused on a competitive twist: they had agreed that the loser would buy a round of scoops from Coldstone Creamery down the block.

Culverland won’t be the big draw in town this Halloween week, but it’s worth checking out if you are in the area. That is, if you aren’t embarrassed to play a board game on the sidewalk in front of a lot of passing cars and people—for the arts, of course.

You can play “Culverland” until November 1 when the game will be removed.