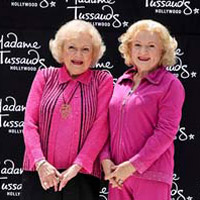 Betty White isn’t simply the latest celebrity to be immortalized in wax, she is also the oldest. The 90 year-old Queen of the Comeback unveiled her doppelganger at Madame Tussauds Wax Museum in Hollywood on Monday.

“Betty White, at 90 years old, is the oldest living person to ever be cast by Madame Tussauds,” said general manager Colin Thomas, “and we’ve been around for 200 years.”

Fans, who were crammed up against metal barricades with cameras and iPhones at the ready, seemed to agree. They included longtime admirers from her Golden Girls days to more recent devotees of Hot In Cleveland. One young girl with turquoise hair teased into an enormous French twist, wore a shirt that read, “Betty is my homegirl.”

Looking spry and stylish, White made her way onto the stage, grabbed the mic from Thomas and addressed the audience with her trademark wit. “Maybe I should stand very still,” she said, “and they’ll think they did a wonderful job.”

As she pushed a cartoonishly large button to reveal her wax counterpart, the crowd let out a collective gasp. Cast in the likeness of present-day Betty — albeit with a very supportive bra — her waxy twin had the exact same hair, same face, and same tiny stature. Dressed in a hot pink sweatsuit trimmed with rhinestones, it cost over $300,000, “You know the only thing that hurts me?” White asked. “Why did they wait to do this til I was 90? A few decades ago would’ve been swell!”

Los Angeles Councilman Tom LaBonge later presented White with a loaf of bread from her favorite bakery and a certificate declaring June 4th Betty White Day at Madame Tussauds. “Betty White is an angel in the City of Angels,” LaBonge announced. It’s doubtful anyone would disagree with him.