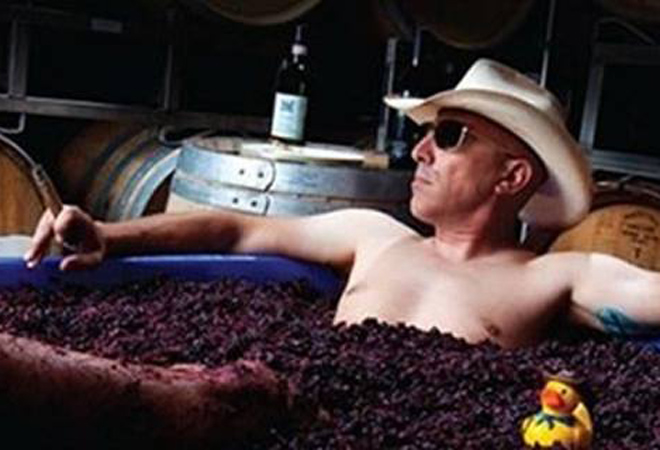 How does he find time to manage all these endeavors? “It’s a matter of deciding what’s important,” Keenan says. “Start getting ridding of things that aren’t necessarily important [and] you’d be amazed at how much you can get done.” Last month, he turned 50 years old. Keenan will commemorate the milestone by putting on a two-night concert, Cinquanta, this weekend at the Greek Theatre.

“I’ve always entertained the idea of having a bunch of people we grew up with in Los Angeles doing a show where we all crossed over performances rather than playing one band after another. It would be an all-encompassing show where we play our own songs but also play on each other’s songs,” Keenan says.

Cinquanta will host performances by A Perfect Circle, Puscifer, and the highly anticipated return of ’90s space rock kings, Failure, who were at the top of Keenan’s wish list of performers. Failure, a Los Angeles group formed in 1990, had a sonic sensibility set them apart from other grunge acts but personal demons and legal woes plagued the band from its inception. Failure acrimoniously disbanded in 1997 without ever finding major commercial success. The band’s third and final album, Fantastic Planet, achieved critical success after the group’s demise and has attained cult status among a generation of fans who were too young to catch Failure the first time around. Keenan may be their #1 fan.

“I had always wanted to see them reunite,” he says. “I guess you could call it coincidence, but I really don’t believe in coincidences. They were writing new material and planning on touring, so it all worked out.”

For Failure’s co-founder, Ken Andrews, the night is about coming full circle. “I remember [Maynard] coming to see us play at Club Lingerie on Sunset (circa early-‘90s),” Andrews says. “He came up to me randomly after one of our shows and said, ‘Hey, I’m in this band called Tool. We’re looking for bands to play with around town and I like your band.’ Before either of us were signed, we were joining forces and putting on shows.”

While the two nights of Cinquanta commemorate a milestone for Keenan, they also serve as a testament to his artistic versatility. Achieving success in his various endeavors has required him to embrace chaos, or at least a certain lack of control. “When you work with someone, it’s almost like playing telephone. You can tell three of your friends a joke and expect them a week later to tell the joke like you told it, and they’re not going to. It’s the same with writing music. Whatever room you’re in with a certain number of people involved, the conversation is going to be different. You don’t have to make an effort to switch hats. It’s just a different conversation.”

After Cinquanta, Keenan will return to his life in Arizona, meticulously overseeing every detail of the winemaking process with his wife. He’ll also continue work on his autobiography, which he is writing with an old friend; he hopes to release it sometime next year. If you’re expecting a salacious road diary, Keenan says, “Go read the Motley Crue book. Nothing wrong with that story but it’s already been told.”

It’s an impulse at odds with Keenan’s distaste for reflecting on past achievements; he prefers to focus on what lies ahead. “All those moments in your life lead to some other things if you’re paying attention to the breadcrumbs,” he says. “I’m one that’s firmly rooted in following your intuition, letting it take the lead and letting it guide you.”