Home Uncategorized Better Than HBO: Why The Hollywood Bowl Is The Best Place To... 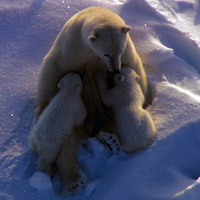 At first, the idea seems absurd: Why, in the age of big screen TVs nearly the size of a billboard, would you choose to leave your living room to see a version of the same show at an outdoor theater with 18,000 other people—and pay big bucks for the ticket? The answer, to paraphrase a certain cable tagline, is because it’s not TV, it’s the Hollywood Bowl.

Last Friday marked the world premiere of Frozen Planet In Concert at the Bowl, a live take on the third and final installment of the BBC/Discovery nature documentary series, which aired on U.S. cable in March. Like the previous series Blue Planet and Planet Earth, Frozen Planet is a filmmaking feat, a passion project of improbable scale that ventures into the Arctic and Antarctic in a way that doesn’t seem humanly possible. Programmers whittled down the original seven episodes into a two-part, 110-minute version, with composer George Fenton leading the Los Angeles Philharmonic through his original score. The result was like a sweeping, orchestral version of a silent movie-meets-Looney Tunes. In what might be the Arctic’s first and furriest meet-cute, images of two polar bears flirting on a glacier the size of Manhattan played out without narration (the stateside TV version features Alec Baldwin’s husky baritone) and let the music do the talking.

The show only ran two nights here, but the concept of transforming television, particularly documentaries, into a crowd-pleasing, large-scale performance is an experiment I’d love to see done more often. In a pop culture moment where The Artist and a nature documentary can both be award-winning hits in their respective medium, it’s an optimal time for the Hollywood Bowl — and other venues — to blur genres and reboot the multimedia experience.

On cable, Frozen Planet was extraordinary, but at the Bowl, it was transcendent. The six-plus years it took to make the series was far more evident (and appreciated) that night than any couch potato POV. It also resolves that digital-age compulsion of being at a live performance but looking at the screen instead of the stage, no matter how hard you try. In these shows, the screen is the stage.

Hollywood Bowl organizers say they hope to try this live-screen event next year with other documentaries and non-verbal films. Here’s one for the suggestion box: on August 24th, the creator of Baraka will release Samsara, a study of global culture rendered in breathtaking (and dialogue-free) spectacle. Not sure how they’d go about getting the sounds of 25 countries onstage, but I’d love to see them try.