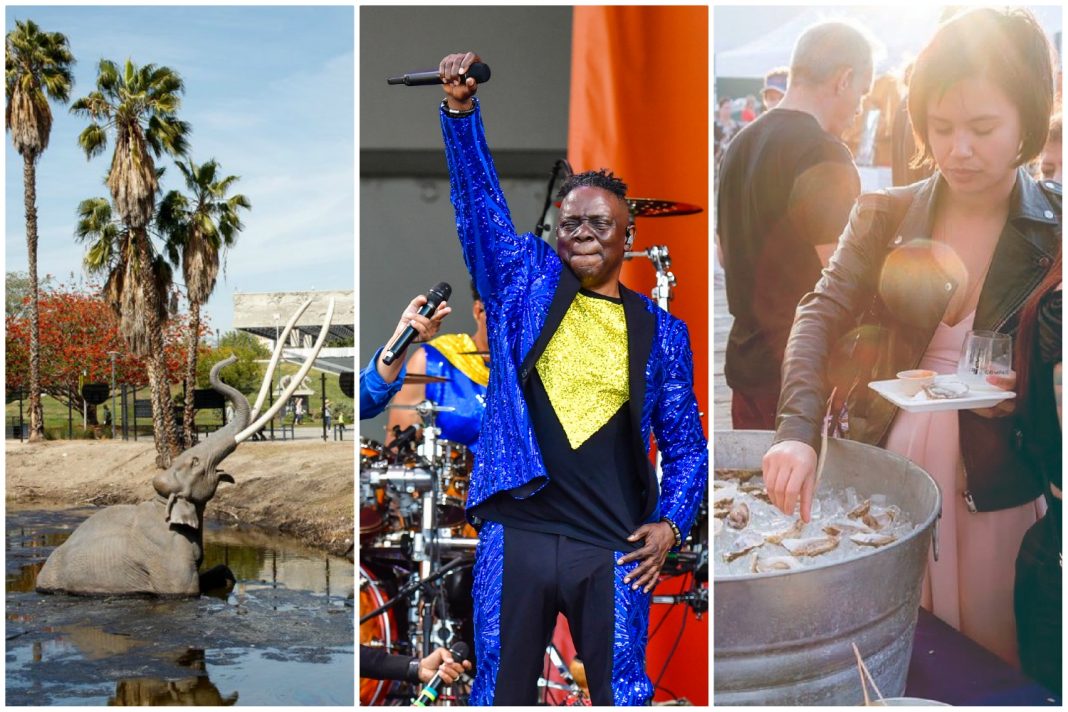 Summer’s nearly in the rearview, but that doesn’t mean L.A.’s slowing down for the season. From R&B legends at the Hollywood Bowl to an art fest at the Tar Pits, here some of the best weekend events in Los Angeles.

Your chance to finally dance to a live performance of “September” in September is here. The 50-year-old group of genre-bending titans joins the Hollywood Bowl Orchestra and conductor Thomas Wilkins to close the season with a doubleheader, fireworks included.

Off the Hook Seafood Festival

A bunch of local restaurants (and also Bubba Gump Shrimp Co.) are taking over the Santa Monica Pier for a celebration of all things seafood. Tickets get you tasting portions from Herringbone, the Albright, Margo’s, Enterprise Fish Co., and more than a dozen other restaurants, not to mention tunes from a tribute band called Driftwood Mac.

There will be tar at this annual art and music fest, but it definitely isn’t the pits. Against the iconic backdrop of the La Brea Tar Pits, KCRW hosts a day of DJs, art installations, live painting, food trucks, kids stuff, and more. Post up in the Lagunitas-sponsored open-air beer garden and cocktail lounge and take in the primordial ooze.

Stuck in Heaven at Leiminspace

If you got stuck on stickers as a kid and never got unstuck, this sticker art show at Leiminspace in Chinatown will be a real treat. Check out (and buy) stickers made by 40 local artists, curated by animator and illustrator Kat Ball. Now all you need are a bunch of notebooks to decorate.

L.A. Opera opens its season with Puccini’s seminal tragedy at the Dorothy Chandler Pavilion. Those preferring to milk the nice weather while it lasts can opt for a free alfresco broadcast of the show September 28 at Santa Monica Pier or Torrance’s Columbia Regional Park.

All About Eve at Cinespia

Bette Davis and Anne Baxter go head to head in this 1950 classic about a conniving woman and the actress she attaches herself to. It’s Cinespia’s last (non-sold-out) screening of the summer.