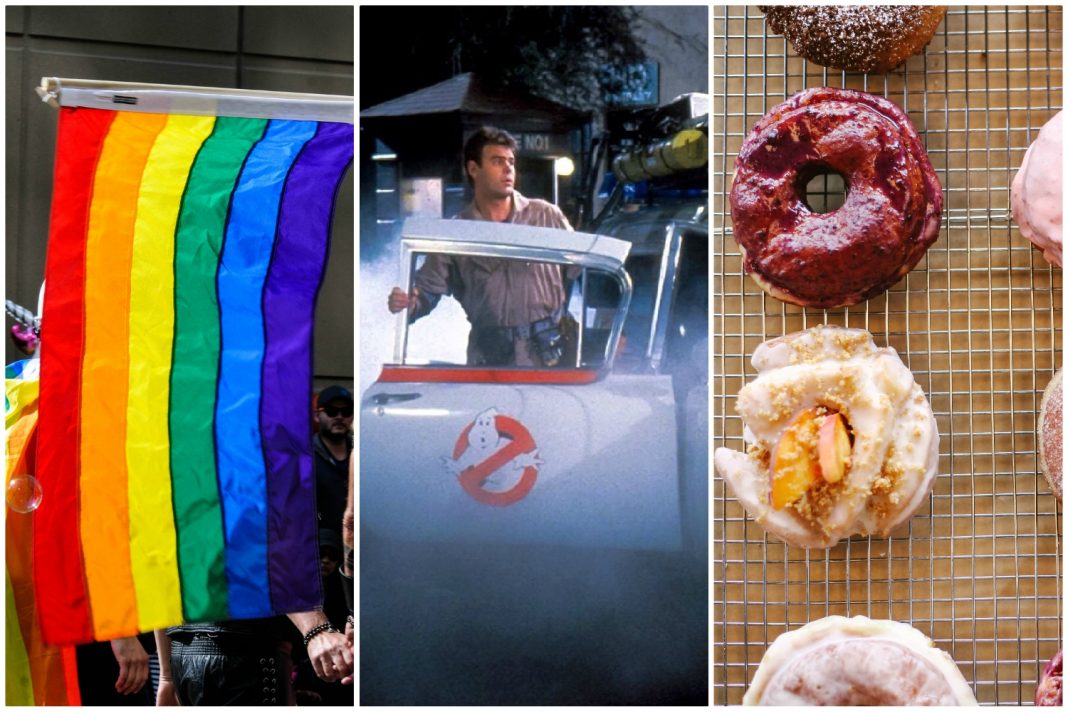 To hell with June gloom, there are going to be rainbows all over the place this weekend. From a screening of the Star Trek reboot to Dyke Day in the park, here are our picks for some of the best weekend events L.A. has to offer.

The folks who bring you ComicCon are celebrating the 35th anniversary of four proton pack-toting dudes in khaki with a two-day festival for megafans. After a Friday night screening of the movie at the Globe, the fest takes over Sony Pictures Studio Lot in Culver City for a day of panels, performances (Ray Parker Jr., duh), and celeb photo ops—everyone from Ernie Hudson and Dan Aykroyd to the lady who played Gozer and the guy who played Dana’s a-hole violinist boyfriend will be there.

Produced by Christopher Street West, the same activist group that organized the historic first Pride march in 1970, L.A.’s most-recognizable Pride celebration has struggled with some controversy in recent years. Critics have suggested more needs to be done to create an event that acknowledges the diversity of the LGBTQ+ experience and strikes the right tone in a changing political climate.

The parade is a free, public event; the festival portion is ticketed ($25-$450) and will feature three stages of live music from Meghan Trainor, Paula Abdul, CupcaKke, Sir Babygirl, and many more.

Between both the ticketed and free events, the City of West Hollywood estimates some 400,000 celebrants will be on the street over the course of the weekend.

Sure, there’s a doughnut shop on basically every corner in L.A., but if you’re looking for the city’s best fried rings of dough all in one place, head to Union Station for the second annual DTLA Donut Fest. New this year: Voodoo Doughnut, Astro Doughnuts and Fried Chicken, and California Doughnuts, along with other newbies and returning faves.

Art in the Afternoon

For two decades, this day of hands-on art experiences hosted by the non-profit A Window Between Worlds has been raising money for programs that help people heal through art in the wake of trauma. At this years workshops you can learn how to do everything from fruit stamping to making flower crowns. There’s also a kids zone, live music, and food.

Head to Inner-City Arts’ DTLA HQ for a music fest that benefits arts education for children and teens. Check out live music from Best Coast and hannon and the Clams, plus sets by Peanut Butter Wolf, J.Rocc, and a handful of dublab DJs. The food lineup includes some of downtowns best, including Guerrilla Tacos, ERB, and Manuela.

Skip the stationary bike and take your cycling affinity outside on one of five routes between Griffith Park and Long Beach. There’s a trail for everyone, from a two-mile kids ride to a 100-mile course for wannabe Lance Armstrongs. All participants are privy to a one-year Los Angeles County Bicycle Coalition membership.

For the 12th year, Dyke Day L.A. will serve as the unofficial Pride parade afterparty for lesbians, queer individuals of all kinds, and their allies–basically anyone who seeks a more grassroots alternative to the bigger Pride events.

The event is a volunteer-organized picnic party in Elysian Park, featuring music, food, and education booths. Dyke Day is less about A-list talent or elaborate production, and more about creating an upbeat community environment where everyone feels accepted and included.

Have Scotty (Simon Pegg, in this case) beam you to the cemetery for a screening of J.J. Abrams’s stylish 2009 reboot of Star Trek. Chris Pine (aka James T. Kirk) will be there in person and all proceeds go to the Anton Yelchin Foundation (the late actor plays Chekov in the film).

RELATED: Your Guide to LGBTQ Pride Celebrations in Los Angeles

Burgers Bourbon and Beer Fest, AAPI Book Festival and Other Best Things To Do in L.A. This Weekend

5 Things to Watch, Do, and Listen To in July