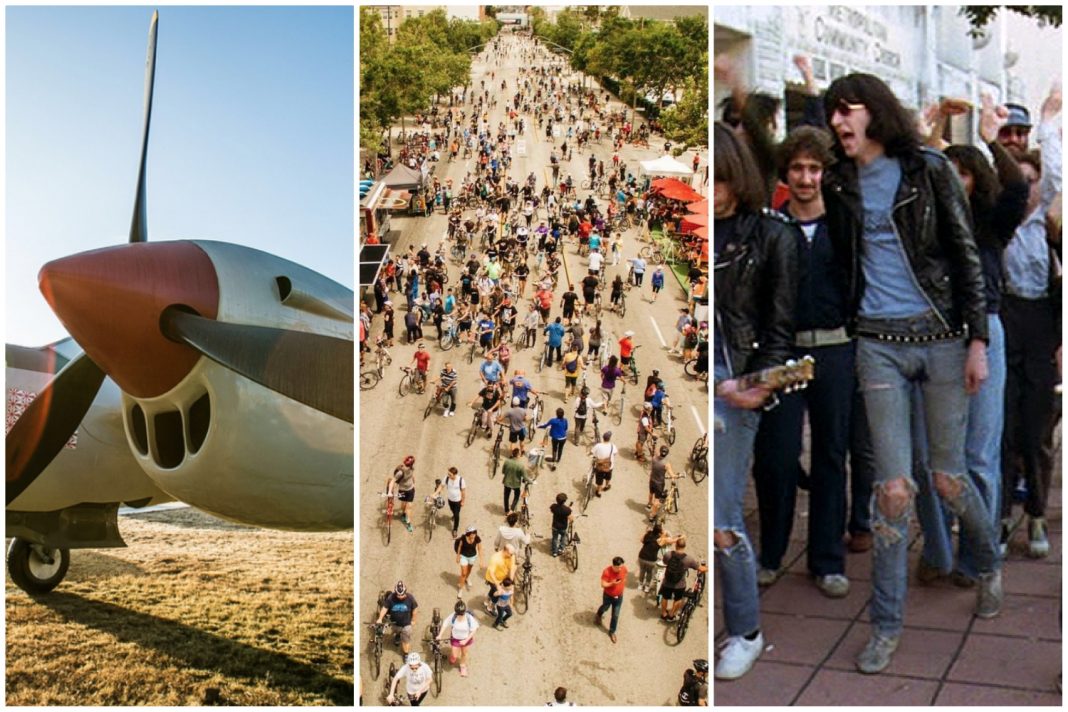 It’s the last weekend before school starts, so go ahead and make the most of it even if you haven’t been in school for years (or decades).

K-pop groups including Mamamoo, Momoland, Seventeen, and Ateez perform nightly concerts at this Korean cultural bonanza at the Los Angeles Convention Center downtown. During the day, gorge yourself on goodies at KCON Food Street or cruise the convention floor.

What better place to celebrate National Aviation Day than an airport-themed restaurant near the airport? Los Angeles International Airport neighbor Proud Bird is celebrating with three days of festivities that include guided tours of the 16 aircrafts on the restaurant’s property, interactive aviation exhibits, $7 themed cocktails, and more.

Ramones-starring teen flick Rock ‘n’ Roll High School turns 40 this year, and to celebrate UCLA’s Billy Wilder Theater at the Hammer Museum is staging a special double feature of it along with 1984’s L.A.-centric Suburbia. Penelope Spheeris, the writer-director of Suburbia, will be in attendance for a Q&A.

The Los Angeles Jewish Symphony and Los Angeles Korean-American Musicians’ Association are teaming up for this multicultural night of music at the Walt Disney Concert Hall downtown that includes performances of Lucas Richman’s latest piece, Symphony: This Will Be Our Reply (its West Coast premiere), and the U.S. premiere of Byunghee Oh’s The Spirit of Korea.

Your favorite political chat podcast comes to life at the Greek Theatre. The core team will be joined by guests Jemele Hill and Amanda Seales, and to break up all the news, you’ll be treated to live music from Maggie Rogers, Best Coast, and Jim James.

An East Coast summer tradition comes west with this series of rooftop seafood boils at the NoMad in DTLA. A ticket for the daytime party includes a family-style serving of shrimp, crab, sausage, corn, and other assorted touches.

When Dolores Huerta is booked to give a speech on stage, you know the festival is going to be good. YOLA DÍA is all about female-fronted music and the power of women to change the world. The one-day event at L.A. State Historic Park features super-cool acts including Megan Thee Stallion, Kelsey Lu, Empress Of, Courtney Love, Sophie, Cat Power, and headliner Lykke Li, plus a food program with some of the best female chefs and bartenders from L.A. and Mexico. The event is backed by YOLA Mezcal, one of the few women-run distilleries in Oaxaca, and a portion of the proceeds will go to the ACLU and the Downtown Women’s Center.

Cruise on bike, skates, or scooter from East Hollywood to West Hollywood with nary a car in sight for this edition of closed-streets event CicLAvia. The 6.5-mile Meet the Hollywoods route takes riders from Barnsdall Park in Los Feliz to West Hollywood Park via Hollywood Boulevard to Highland Avenue to Santa Monica Boulevard.