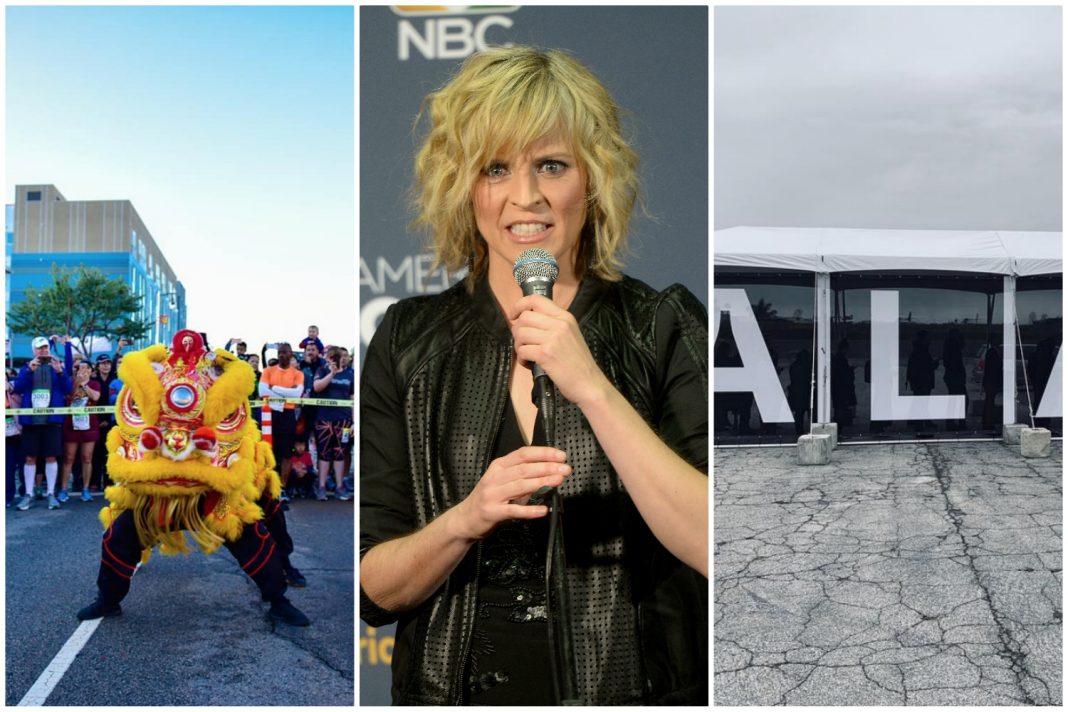 Well, L.A. is still being the Pacific Northwest most of the time, but that’s no reason not to have a great weekend (people in Seattle do it—we think). From free Friday afternoon comedy to a Lunar New Year run, here are our picks for the best things to do in L.A. this weekend.

Comedian and self-professed human raccoon Maria Bamford is workshopping an hour of new material—and right in the middle of the day on a Friday. If you can weasel out of work, catch her fresh standup content at 1 p.m. at the Clubhouse on Vermont.

A party for “fabulous freaks” according to Traci Lords, Lethal Amounts gallery’s monthly club night is celebrating its second anniversary on Friday night at Globe Theatre downtown. For the occasion they’ve enlisted Marc Almond, who’ll perform live with a full band, along with the Voluptuous Horror Of Karen Black & Kembra Pfahler, Sateen, and DJ sets by resident DJ Matthew Pernicano and many others. Club kid attire highly encouraged.

Love on the Big Screen

Swap your Netflix and chill V-Day plans with ones we’re calling “Aero and chill.” The Aero theater’s annual mush fest returns for another year of screenings that have in the past included classics like Casablanca and Edward Scissorhands. Cap off your date night with goodies from nearby Forma or Sweet Lady Jane.

For 10 years running, ALAC has brought the world of contemporary art to L.A.’s Westside. Expect 65 exhibitors bringing on-site performances and installations. It’s going down at Barker Hangar through Sunday.

It’s long been a popular notion that L.A. can’t sustain an international art fair. Frieze L.A. is setting out to prove the naysayers wrong by bridging L.A.’s unique sensibilities with a storied existing fair. As our own Scott Timberg put it, “That means about 70 galleries, including local presences like David Kordansky, Regen Projects, and Blum & Poe, coming together for three days (February 15 to 17) on the best of the old studio lots: Paramount.” Expect a weekend of art and events on the lot, as well as self-guided walking tours throughout Los Angeles.

LACMA pays homage to the late Charles White with two complementary exhibitions. The first is a retrospective at Charles White Elementary School (fka the Otis Art Institute, where the artist served as the first black faculty member) and spotlights his impact as a teacher; the second is on view at the Mid-Wilshire museum and features roughly 100 drawings, prints, and oil paintings.

Going strong since ’78, the Chinatown Firecracker Run/Walk is the “longest running Lunar New Year charity run in the U.S.” On Saturday, there will be a pair of long-distance bike rides as well as a dog walk, and on Sunday the famous 5k and 10k run/walks commence, followed by the Firecracker Festival.

RELATED: With the Arrival of Frieze, L.A. Finally Has the International Art Fair It Deserves