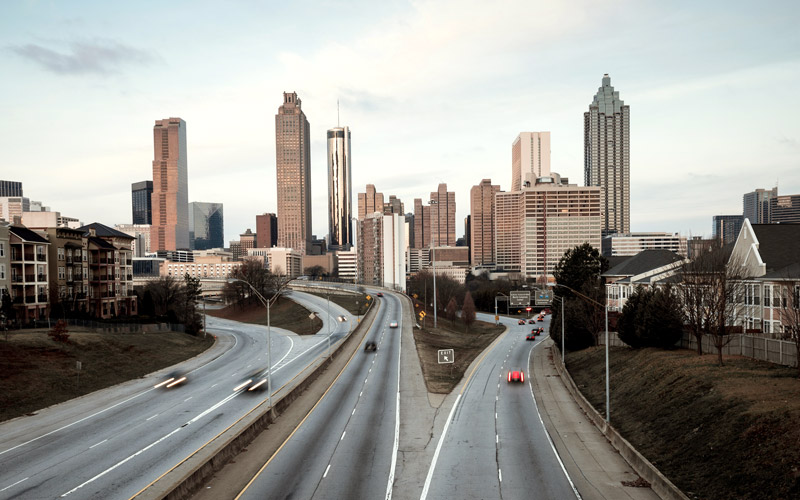 Thanks to generous tax credits, Atlanta has become a major filming destination, standing in as Genericsville, USA, for all manner of site-nonspecific movies and shows. It’s also served as a doppelganger for Los Angeles in movies like The Nice Guys—movies that are very much about L.A. For those of us who love Los Angeles, there’s a sense of loss when we watch those films and realize that what we’re seeing onscreen isn’t actually here—and not because runaway production is stealing our jobs. When you get wrapped up in the L.A. aesthetic of something like The Nice Guys only to realize that what you’re seeing was filmed elsewhere, well, it feels like you’ve been cheated. You lose that element of historicity that makes, say, La La Land (or Inherent Vice or Knight of Cups or even that second season True Detective for what it was) compelling. We want to see our city showcased.

That’s why Donald Glover’s Atlanta was so refreshing—it did away with pretense and allowed the city of Atlanta to be its own character. Glover took a place we’ve mostly encountered onscreen as EXT. NONDESCRIPT SUBURBAN NEIGHBORHOOD – DAY and breathed it full of life.

When Glover described his show as “Twin Peaks with rappers,” he was presumably alluding to the two shows’ similar arthouse tones or willingness to dabble in the surreal. But more than that, Glover demonstrates a Lynchian mastery of setting. “The show seems solely dedicated to portraying the peculiarity of the city at first, name-dropping a ridiculous amount of hotspots and traveling at warp speed between rural, urban, and suburban sets,” Vann R. Newkirk II writes in The Atlantic.

First, there’s the look. The damp concrete, the lush overgrown grass, the florescent-lit liquor store parking lot. You can feel the mugginess. Then, there was the insidery stuff—the MARTA bus, Goldrush Show Bar strip club, restaurants like Zesto,  J.R. Crickets, and Waffle House, etc.—all of which mean nothing to many of us, but which, I imagine, were as rewarding to Atlanta residents as La La Land‘s shots of Angel’s Flight and the Rialto Theater were for Angelenos. There’s also the show’s wholehearted black-ness; Glover revels in the multiplicity of the region’s culture with seemingly little regard for outsider accessibility, painting Atlanta as the black city it is (over half the population is black). Then there’s the hip-hop, and man do the hip-hop references go deep.

“For a person who fell in love with [the southern hip-hop renaissance], Atlanta reaches almost fan-service-levels of gratuitous references and déjà vu,” Newkirk writes. “Whether the show will land with similar joy to those unfamiliar with the city is something I’m not equipped to say, but the level of dedication to scene and place are clear marks of care from Glover.”

From my place of near-total ignorance—of black culture, of hip-hop, of Atlanta, of the South, of most things, honestly—Atlanta made me feel like an outsider. And I loved it. Glover’s joyous commitment to his real-world setting fostered an uncommon sense of wonder in those of us excluded from it. Experiencing a show as a foreigner was unusual for many of us (as a white guy in Los Angeles, so much of what I watch is catered to me), and it gave Atlanta a richness that lowest-common-denominator TV lacks. Whether or not we got it all didn’t matter.

In L.A.—a city where our self-image as a white Hollywood town is so gratuitously reinforced in cinema (just look at the awards season success of Hollywood-centric stories like Birdman, Argo, The Artist, and now La La Land)—it felt great to be on the outside for once. Many of us who live here loved La La Land because it reinforced our (white, privileged) vision of Los Angeles. But Atlanta, experienced as an outsider, was challenging and unfamiliar, the inverse of La La Land in all the best ways. For once we got to see Atlanta onscreen, not as discount L.A., but as a jubilant homage to itself.

Thomas Harlander is a staff writer at Los Angeles magazine. You can follow him on Twitter and Instagram. He recently wrote “The Most Philosophically Significant Moment of Westworld Is Hidden in the Opening Credits.”