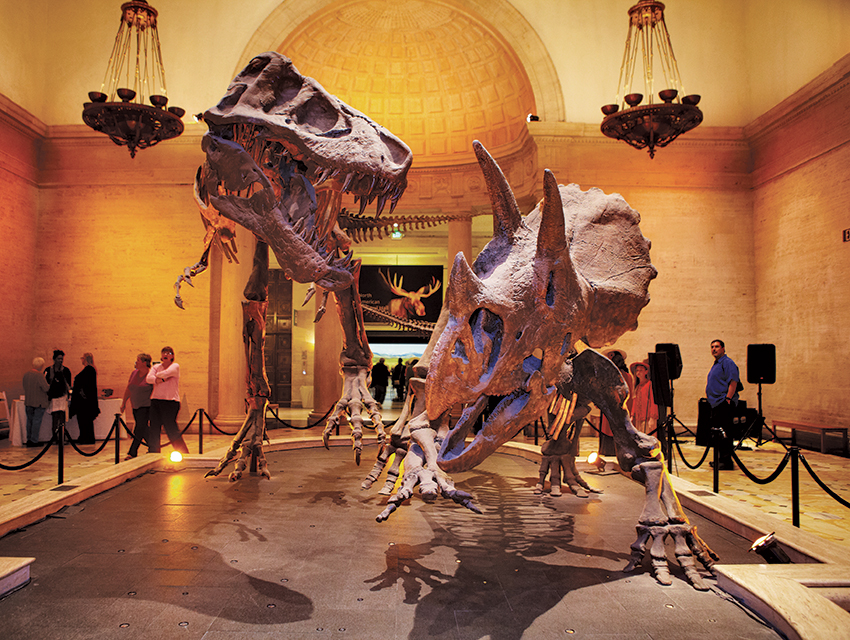 There’s no shortage of things to do in L.A., but if you’ve been sticking to the same old routine, allow us to help you get out of your rut. Might we suggest drawing nude models, locking yourself in a room until you solve can solve mathematical riddles to get out, or strolling through an urban labyrinth? Here are 22 of the absolute best things to do in this city, including new ways to experience the L.A. institutions you’ve been to again and again. When you get bored of what the city has to offer, all it takes is a short drive to relax in wine country, gamble at a casino that’s much closer than Vegas, or take a horseback ride up the California coast. Still need more options? Check out the rest of our Best of L.A. picks for 2016 here.

Brush up on your anatomy with Gallery Girls, which hosts drawing workshops with some of the city’s most respected male and female art models. Sometimes the posers are in costume—the monthly “Drink & Draw” event ($15) has rotating themes like “Steampunk Cowgirl” and “Arabian Nights”—but the twice-monthly “Sunday Art Brunch” ($25-$30) features sitters who pose nude for four hours at a time. Venues vary, and sketchers should bring their own pens, pencils, paper, and easels.

It’s all retro at Sweeney Todd’s Barber Shop, down to the chairs and cranberry gloss floors that date to 1947. (The three barbers in crisp white smocks Sweeney Todd’s Barber Shop could have stepped out of a Bugs Bunny cartoon.) If it’s a meta meditation on barbershop culture, owner Todd “Sween” Lahman isn’t copping to it. He’s straight-faced with the straight edge and acts as though he’s never heard of Twitter (talk on your phone and you’ll be asked politely to scram). Every day is Throwback Thursday here, three-towel hot shave and all.

RELATED: Best of L.A.: The 24 Best Things to Eat and Drink in Los Angeles

A massive complex housing a handful of businesses seems  to materialize downtown every other week, but the most enticing is Project Space in the Arts District. Part art gallery, part retail hub, part bar, the 4,000-square-foot building has hosted everything from a book launch to artist Aaron Rose’s pop-up watering hole, La Rosa Social Club. And here’s the best part: You need to park only once.

Road Trip You Can Do In A Day — Los Olivos

A transformative wine-tasting daycation is worth a two-hour drive, especially when the idyllic town of Los Olivos is your destination. More charming than Temecula and less sprawling than Santa Barbara, the 2.45 square miles of Los Olivos house more than 20 tasting rooms from top producers such as Stolpman Vineyards and Carhartt. Leave at ten and arrive in time for lunch at Sides Hardware and Shoes (yes, it’s a restaurant), then spend the afternoon taking in the scenery and sampling vino from some of the Santa Ynez Valley’s best. Designate a driver—you still have to make it home.

Trade panoramas of the Pacific for scenes along the Paramount Ranch trail with Malibu Riders. The ranch is an active film set designed to look like a town from the Old West: Along its dusty streets sit saloons, churches, and inns (keep your eyes peeled for a shoot-out). Hollywood fades away as you enter the oak-covered valleys of the Santa Monica Mountains, and the hour-long trek ends with the well-kept horses fording a creek beneath a canopy of over-grown trees.

If you really want to jump-start a vinyl habit, head to the Record Parlour in Hollywood, an analog utopia packed with vintage albums, antique jukeboxes, and refurbished stereo components. The massive inventory has more than 30,000 records (LPs, 45s, 78s— the list goes on), but knowledgeable clerks make digging through the stock less intimidating, and organized shelves aid in the discovery of buried tunes. Stop by on weekends for one of the popular sidewalk sales or to check out a DJ spinning wax.

Medieval kings would often walk garden mazes to untangle a cognitive knot. The Peace Awareness Labyrinth & Gardens is L.A.’s urban equivalent. Located behind the Guasti Villa,  a West Adams mansion built in the early 1900s, the 40-foot-wide travertine network shares its pattern with France’s Chartres Cathedral. Stroll it at no cost, taking a moment to meditate, pray, or connect with nature. Bubbling fountains set the scene for serenity in the heart of the metropolis.

Escape relentless Top 40 hits at Discostan, a monthly dance party dedicated to Turkish funk, Senegalese mbalax, Algerian raï, and more. Every second Wednesday a revolving troupe of DJs steps behind the decks at Footsie’s in Cypress Park; expect high-energy tunes that boldly traverse time periods (think prerevolutionary Persian pop or synthy 1980s Indian disco) and inspire you to get your groove on. Gyrating not your thing? Listen to the Discostan radio show online, which broadcasts from Boyle Heights’ Espacio 1839.

Nothing says SoCal skate culture like Venice Skate Park. Located in Dogtown, the birthplace of modern skateboarding, the 16,000-square-foot beachside playground caters to most every style—vert, street, et cetera—thanks to a small street plaza, a mini bowl, an empty pool, and a snake run. Ams and pros can hone their ollies and frontside grinds side by side, though a quiet solo ride right after dawn is unbeatable.

Don’t let an anemic bank account stop you from experiencing the L.A. Phil in its second most natural habitat: the Hollywood Bowl. The orchestra usually holds open rehearsals at the iconic venue on Tuesdays and Thursdays (July through September) from 9 a.m. to noon. Admission and parking are free, so nestle into a box seat and savor an intimate concert with other folks in the know. Call ahead, as the schedule is subject to change.

Spot For Board Games — Game Haus

At Glendale’s Game Haus, $5 grants you access to nearly 1,200 tabletop games. The inventory is organized by category—Classics (Monopoly, Clue), Strategy (Settlers of Catan, Ticket to Ride), the Hall of Shame (Trump: The Game, L.A. Game)—and each title is refreshingly intact, tiny pieces and all. An on-site café ups the ante with sandwiches, pizza, homemade pie, coffee, and tea.

Golden Road Brewing in Atwater Village has been a leader in L.A.’s craft beer movement since its debut in 2011, and you can explore the premises free of charge every Friday through Sunday (tours start at 1:30, 2:30, and 4). The guided 45-minute outing typically begins in a climate-controlled storeroom that holds barrels of aged specialty beer. The fermenty magic happens in a separate building, where microbiologists and brewers keep tabs on carbonation and canning. Sample the goods straight from the spout before you leave.

Bookworms seeking local indie reads will feel at home at Stories Books & Cafe. Flip through Roy Choi’s L.A. Son in the cooking section, or plan a workout with Charles Fleming’s Secret Stairs. The store offers sales and trades, meaning the stacks are consistently well stocked with community favorites. Grab a book, some granola, and a cup of Bicycle coffee before hunkering down on the patio, where succulents and colorful murals create an easy ambience.

At Vista Hermosa Park overhanging oaks and a gurgling stream are enough to make you think you’ve ventured out of the city, until you come to a hilltop meadow with a view of the downtown skyline. The Mia Lehrer-designed green space is smallish (slightly more than ten acres), but its perks are unmatched. With areas for picnics and boccie, a playground, clean restrooms, and free parking — plus a FIFA regulation soccer field— it’s a pocket of tranquillity even Griffith can’t touch.

An hour-long session ($35) is the preferred WOD at Sweattheory in Hollywood. Rather than heating the air around you like a traditional sauna, each unit here uses infrared light to permeate your skin and heat your body directly (like sunlight, only without dangerous UV rays). The techy tweak is also said to relieve muscle pain and cleanse pores. Sweat in silence or listen to a meditation soundtrack, then step into a private shower for a rinse, complete with towels soaked in lavender or eucalyptus oils.

Take it back to summer camp— only better, because there’s wine—at the Craft & Folk Art Museum . Every first Thursday of the month, the Miracle Mile institution hosts an evening of creativity in the courtyard that draws first-daters as well as seasoned artists ($8; members, free). Try out a new technique (piñata making, felting), often guided by a local institution; one class had crafters painting on velvet with the help of Velveteria, L.A.’s museum of black velvet art.

The safaris at Tippi Hedren’s Shambala Preserve ($3,000) may have live animals, but the Natural History Museum’s Adults-Only All Nighter ($135; members, $119) have us reaching for our sleeping bags. The events are often themed and include an open beer-and-wine bar as well as a mini buffet. Participants usually snooze amid the African Mammal dioramas, but for an extra $15, you can sleep with the T. rexes in the Dinosaur Hall.

Da Vinci Code-style cryptology is the game at Escape Room LA, where teams have 60 minutes to break out of a locked room using only their wits ($30; $35 on weekends). Clever designers have created four themed simulations; whether you’re exorcising a ghost from a haunted theater or navigating an underground cavern, you’ll need to channel your inner Robert Langdon to solve mathematical riddles and visual puzzles that stand between you and your freedom.

A solid drink program is the engine of a good bar. At Pour Vous, strong drinks come with a little something extra: performances by aerialists, who descend from the ceiling on circus apparatus or in cages. Similar productions at other bars intrude on the mood, but Pour Vous makes each show part of its atmosphere; the speakeasy-style cocktail lounge is so intimate that a woman sensually dancing in mid-air seems like part of the decor.

At A Club Called Rhonda, the roving polysexual rager and L.A. nightlife institution, more than a thousand hard-partying guests are encouraged to don their fiercest sartorial concoctions. Want to cover your face in sequins? Fine. Need an excuse to wear leopard-print everything? Live your truth. But if you want to come in jeans  and a tee, that’s OK, too. Rhondas are held all over town on a near-monthly basis; the next is slated for Labor Day weekend at the Mondrian hotel. Ready your mermaid gear now.

Workout For People Who Hate Working Out — Sandbox Fitness

If battle ropes and TRX bands seem more like torture devices than exercise equipment, head to Sandbox Fitness. David and Minna Herskowitz have swapped out rubber floors and free weights for sand and surfboards at their Sherman Oaks studio, which offers the as-seen-on Shark Tank workout called Surfset. The 45-minute class merges cardio, core work, and strength training (riders balance atop an unstable board in a sandbox). A bonus? It feels like a carnival game. Each visit costs $22, but get this, bro: The first ride is free.

How to Get Into L.A. Museums For Free