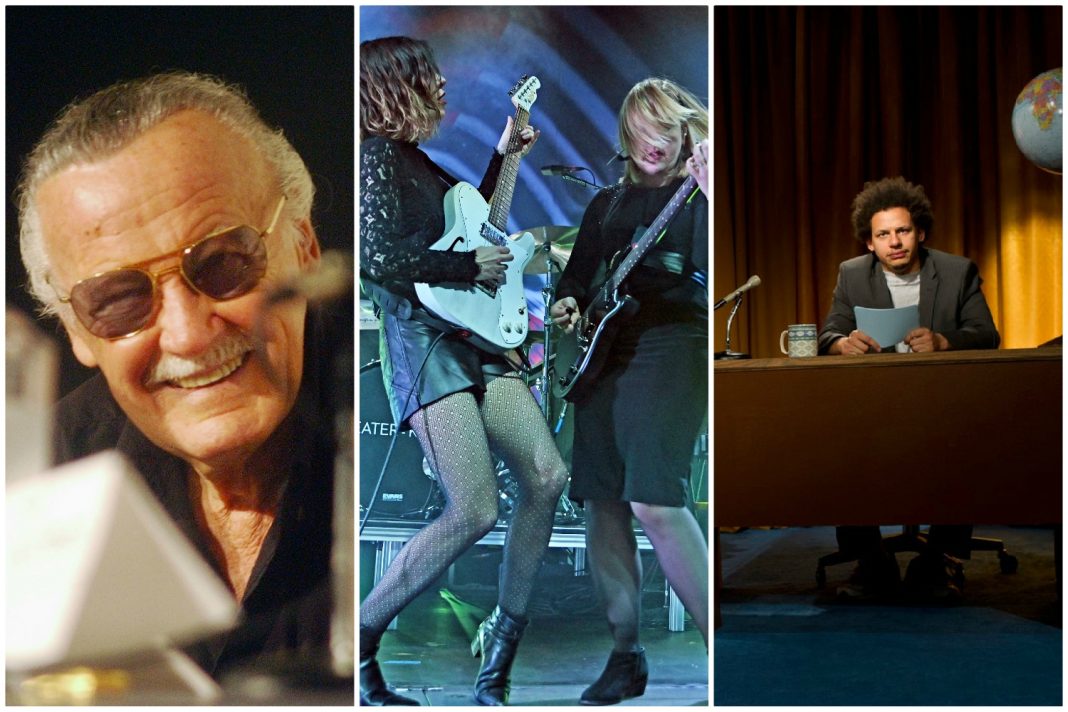 Learn how to prepare a holiday feast, pay tribute to comic icon Stan Lee, or scoop up some cute collectibles at DesignerCon—here are some of the best November events in Los Angeles.

LACMA is busy this month: First it’s honoring filmmaker Alfonso Cuarón with a career
retrospective gala on the 2nd. Then it’s opening a midcareer survey of large-scale abstractionist Julie Mehretu (the 3rd), in addition to a dreamy walkthrough of installationist Do Ho Suh’s New York apartment (the 10th).

Summer isn’t over—in fact, it’s coming to the Pantages via Broadway. Grab a seat (starting at $39) for this jukebox musical (one hour and 40 minutes), which charts the eponymous legend’s journey from gospel choir crooner to pop-culture goddess.

Disney and Pixar’s Oscar-winning Coco gets the live concert treatment at the Hollywood Bowl (starting at $38). The in-house orchestra will perform the soundtrack as the film plays on the jumbo screen. Special guests include Benjamin Bratt, Eva Longoria, Miguel, and the Mariachi Divas.

A post shared by Los Angeles Coffee Festival (@losangelescoffeefestival) on Oct 25, 2019 at 9:21am PDT

Caffeine heads, make tracks for Magic Box @ the Reef for L.A.’s second Coffee Festival. Tickets ($35 to $125) give access to a tasting lab, an innovation zone, and Coffee Masters USA—the fest’s fierce centerpiece competition, which for the first time is moving from the East Coast to the West. Ten percent of all profits from the event benefit Project Waterfall.

Rapper Tyler, the Creator takes over Dodger Stadium for two days to throw this leaner but potent Coachella rival. Ride the Ferris wheel and gorge on bacon-wrapped hot dogs between sets by Willow Smith, Solange, Brockhampton, Yasiin Bey (fka Mos Def), and,
of course, Tyler. All ages welcome—kids five and
under get in free.

Beside the Edge of the World

Thomas More’s seminal Latin text Utopia will be the jumping-off point for five creatives working with the Huntington Library. Artists Nina Katchadourian, Beatriz Santiago Muñoz, and Rosten Woo, plus author Dana Johnson and L.A. poet laureate Robin Coste Lewis will create utopias all their own as part of this exhibition, which will be in the Chandler Wing and around the gardens.

Join Danny Fingeroth (A Marvelous Life: The Amazing Story of Stan Lee) and animation historian Jerry Beck at the Skirball Cultural Center ($10) as they discuss the successes and controversies of Marvel Comics legend Stan Lee. An audience Q&A and book signing to follow.

Sleater-Kinney may have lost its drummer, but the show must go on for singer-guitarist Corin Tucker and Portlandia’s Carrie Brownstein. The indie rock pioneers will take the stage at the Palladium, and with the purchase of two tickets (from $41), concertgoers will bring home a copy of the group’s latest St. Vincent–produced release, The Center Won’t Hold.

Adult Swim brings a mix of music (Jamie XX, Vince Staples, Lil Nas X) and comedy (Conner O’Malley, Three Busy Debras, The Eric Andre Show Live!) to downtown’s Banc of California Stadium. Partygoers ($49 to $499) should also keep their eyes peeled for the Meatwad Dome, where they can ride a mechanical hot dog (instead of bull) and get a special sneak peek of season 4 of the network’s animated breakout hit series Rick and Morty.

Let the Gourmandise School in Santa Monica help you flex your culinary muscles with its
special holiday-themed courses—sides (on the 17th, $125), vegetarian options (24th, $125), and a bake-and-take pie class (27th, $135).

Since 2006, DCon has put the spotlight on toys and collectibles. The tradition continues this year at the Anaheim Convention Center, where attendees ($20 to $70) can check out more than 500 vendors and 300 artists via booths, panels, and signings.

RELATED: The Best Things to Do in L.A. This Weekend