Home TV The Best Moments on The Colbert Report 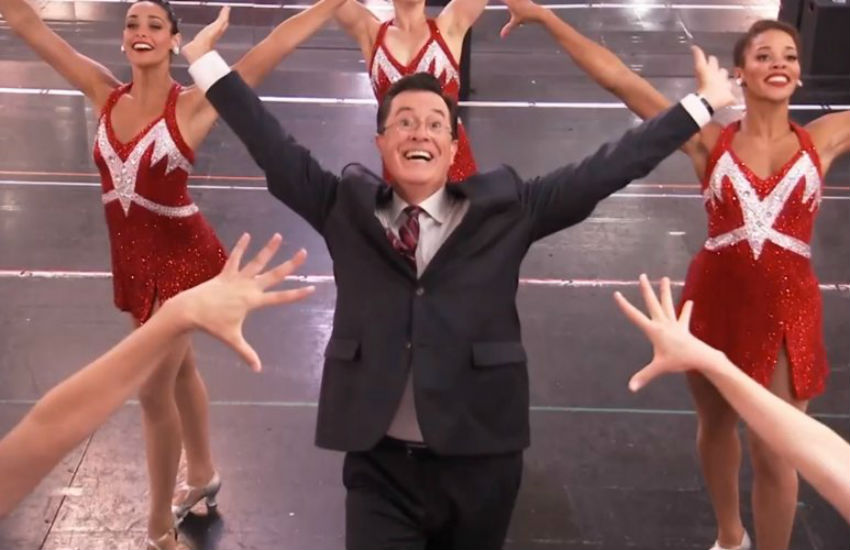 From his controversial Super PAC, Americans For a Better Tomorrow, Tomorrow to the Rally to Restore Sanity and/or Fear masterminded with longtime collaborator and faux-nemesis Jon Stewart, Stephen Colbert made comedy sharp and thought provoking with his show The Colbert Report. Tonight, Comedy Central airs the final episode, before the Emmy Award winning host takes over the Late Show reigns after David Letterman sometime next year (earlier this week, those in the know had a chance to score Colbert’s iconic desk and other set pieces on auction for charity, just in case you weren’t ready to let go yet).

While late night entertainment on Comedy Central is left with a gaping Stephen Colbert shaped hole, we’re super excited to see what the satirist is going to do with the Late Show format on CBS (Perhaps a backing band lead by Bill “Papa Bear” O’Reilly?). There have been a lot of amazingly funny and thought provoking moments on the report during its ten-season stint. Picking out favorites is easier said than done. Never the less, we’ve compiled the ultimate list of Colbert cracks, rants, and interviews to prepare you for an undoubtedly epic finale tonight.

Jane Fonda and Gloria Steinem on The Colbert Report
“Gloria [Steinem, ed.] will you hand me those McIntosh apples and explain to me, what is the state of American feminism?” Colbert has always been the master of meaningful juxtaposition. In this episode from October 2006, where Jane Fonda and Gloria Steinem go on the show to promote their new radio series, Colbert situates the interview in a mock TV-kitchen to make an apple pie. If that poignant metaphor for gender inequality doesn’t do it for you, Colbert wearing a “Kiss the Cook”-apron over his suit will.

The Dance-Off
In 2007, South Korean kpop sensation and teen heartthrob, Rain, took the top spot on Time’s list of the 100 most influential people in the world (Colbert and Jon Stewart made fifty-third place the following year). Needless to say, Colbert did not take that one sitting down (literally).

Colbert introduces his Mexican cousin Esteban Colberto
One of Colbert’s most ingenious alter egos and recurring characters is his fictional Mexican cousin (hint, it’s Colbert with a fake mustache) Esteban Colberto, host of the Colberto Reporto, and frequent contributor. This clip from September 2012, at the height of presidential election fever, features Colberto (who speaks only in Español) commenting on the lack of support for Mitt Romney among Latino voters. Political pundits take note. Wearing a pink jacket with matching tie is the only way to discuss serious issues.

Colbert wants to get rid of his new Super PAC
“I took money from some scary guys. I just want out of the Super PAC business. But I’ve got a lot of money in there and I’d like to keep it.” Colbert won a Peabody Award in 2012, in part due to his bizarre political performance art experiment starting a political action committee. Raising awareness of how Super PACS, the fund-raising organizations behind political campaigns, actually work is couched as the hilarious byproduct of an interview with former chairman of the federal election commission Trevor Potter.

On the word “truthiness”
“The wordinistas over at Webster’s are going to say, ‘hey, that’s not a word,’” but that didn’t stop Colbert from inventing the term “truthiness.” It’s the kind of truth that comes from the gut (like bad political decisions) and can be trusted unlike books, which in the words of the host are, “all fact and no heart.”

Kendrick Lamar Dropped a Whole New Album While You Were Sleeping

Jon Stewart Is Back, Y’all