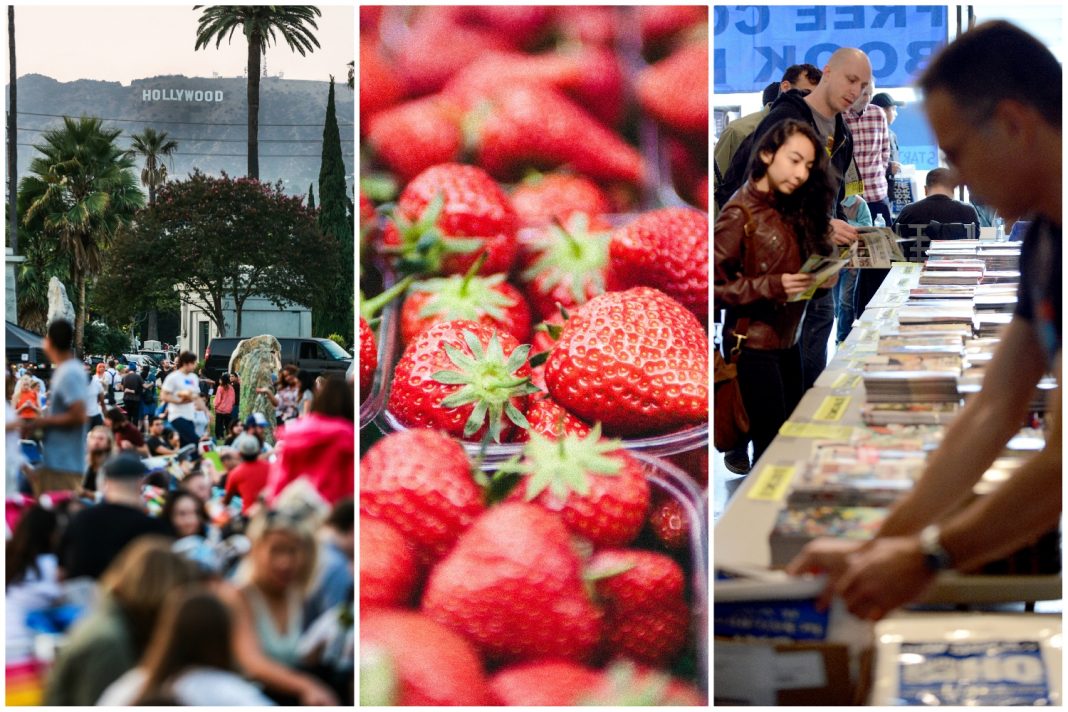 The jacarandas are nearly in bloom and so is a new month full of fun stuff to do. From a live musical sketch show at the Wallis to a strawberry fest in Garden Grove, here are our picks for the best things to do in L.A. in May.

You know it as Star Wars day (May the fourth be with you), but the first Saturday in May is also a chance to visit your local comics purveyor and walk away one title richer. Free
comicbookday.com has a list of participating shops in your hood.

Even if you think you have pop-up museum fatigue, give this one a shot: Artists from across the globe showcase a series of interactive light and audiovisual installations—a 16-foot-tall LED sculpture and a 114-foot-long tunnel of lights among them—at this trippy exhibition at Exchange L.A. Tickets are a little steep at $30, but take solace in the fact that a portion of your dough is going to educational nonprofit Inner-City Arts.

Once Fiddler on the Roof finishes its run at the Pantages on May 5, the theater swaps imperial Russia for 19th century France with an upgraded production of Les Mis. Between staging and scenery glow ups, plus a slew of hit ballads, we’d say there are 24,601 reasons to catch it (see what we did there?).

The Story Pirates—aptly described as Monty Python meets Schoolhouse Rock!—anchor at the Wallis, where comedians from the Groundlings, UCB, and elsewhere spin your kids’ suggestions into live musical sketches.

Spring in L.A. wouldn’t be spring in L.A. without the kickoff of outdoor movie season. Cinespia returns to its hallowed stomping grounds on the 11th with a screening of the 1988 classic Beetlejuice; The Matrix, Legally Blonde, and Rear Window round out the month. As usual, costumes and BYO picnics are highly encouraged.

He’s still rebounding from tendonitis, but superstar pianist Lang Lang joins the L.A. Phil for two performances of Beethoven’s first-written (but second-published) concerto. Completists can catch concertos Nos. 1 and 3 on May 18, while Nos. 4 and 5 get some love on the 23 and 24, each with different piano virtuosos on the bill.

Museums of The Arroyo Day

Stoke your kids’ creativity at this inventive to-do at the Hammer Museum, where architects, musicians, and painters lead hands-on workshops. A-listers like Sofia Vergara and Armie Hammer are on tap for story time, too.

Dance phenoms Jon Boogz and Lil Buck bring their mix of choreography and spoken-word poetry to Royce Hall. You might need to debrief over Diddy Riese after experiencing the pair’s opus on mass incarceration, immigration, and environmental ruin.

In the mood for a Memorial Day weekend road trip? Grab the kids, set your Google Maps for Garden Grove, and cruise to the 61st annual strawberry fest for slices of free strawberry cake (yum!), carnival rides (woohoo!), and at least one punny attraction (the Berry, Berry Beautiful Baby Pageant).

Let’s hear it for the little indie publishers that could, many of which you can catch during this fest at Culver City’s Helms Bakery. All of the bookish festivites wrap up at 6 p.m.; finish your night right by grabbing Sichuan dumplings at nearby Lukshon or one of Father’s Office’s famous burgers.