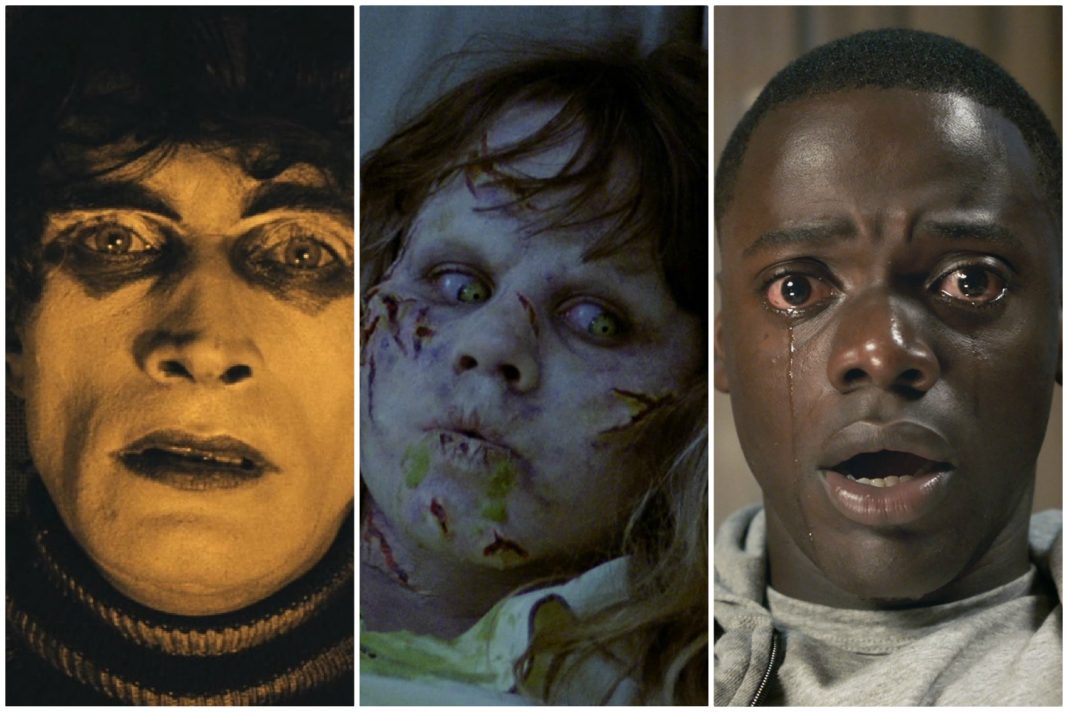 To any studio executives out there, here’s my pitch for the scariest movie you’ve ever seen. A writer for a monthly magazine naively proposes a column on the dozen all-time greatest horror films, and the editor approves it—at which point the writer suddenly finds himself trapped in a haunted Cineplex showing every horror picture known to man. Before time runs out, he must identify the 12, and in his mad dash from one screen to the next, the corridors come alive with blood-soaked letters to the editor scrawled in acid-green ink from readers demanding how It or Candyman or House of 1000 Corpses could be left out.

But here’s a secret about the great horror classics—they’re not just scary films. Great horror movies aren’t amusement-park thrill rides that make you jump in the dark, only for you to forget them moments after leaving the theater; sometimes they’re the movies that get into your head and become an unnameable dread you can’t shake for days or weeks or months.

Anticipating the horrors of the 20th century (there’s a reason a celebrated historical treatise would later be titled From Caligari to Hitler), this movie created the genre. Shot exactly 100 years ago this January, the first great horror film was a tour of the authoritarian subconscious, led by a homicidal sleepwalker played by Conrad Veidt, the actor who would be the Nazi major in Casablanca 22 years later.

Author Bram Stoker’s estate nearly succeeded in destroying every print of this unauthorized adaptation of his novel Dracula, which might have driven a stake through the heart of horror’s most enduring creation: the vampire. German director F.W. Murnau’s classic continues to have an impact down the decades, as recently as 2015’s excellent The Witch. Director Guillermo del Toro called it “a symphony of fear” and listed Nosferatu not just among the best horror movies but the greatest films of all time.

Not as overtly frightening as its predecessor, this sequel nonetheless proved stranger and more unsettling in its mix of revulsion and pathos. Elsa Lanchester is both the bride and Mary Shelley, the 18-year-old girl who dreamed the original story—of a mad scientist’s experiments with life and death—one dark and stormy night not far from the true-life Frankenstein Castle.

It’s all a trick of the light. This story of shapeshifters among us made more explicit how horror isn’t just about death but also about sex. The filmmakers had no budget and not a special effect to their names, unless you count the shadows, the brilliant black-and-white cinematography, and the unearthly feline eyes of French actress Simone Simon. Not necessarily to be confused with the wonderful 1944 sequel The Curse of the Cat People or the interesting but failed 1982 remake.

Robert Mitchum is the preacher with “LOVE” and “HATE” etched across his knuckles who murders women for money and the abomination of—here’s that subject again—sex. So singular as to rise above genre, Hunter is as strange as any movie that ever came out of Hollywood: American gothic at its creepiest, grotesque even in its sweeter flourishes, which waft like the perfume of a toxic Southern flower.

This Italian cult movie about a young American prima donna in a satanic European dance academy is so indelible that no one dared a remake until last year. Its assault on the senses grows with ferocity until narrative logic collapses completely, and the architecture, billowing curtains, and bonkers color scheme would show up in the work of future cult directors, including del Toro and David Lynch.

Appropriately shown at midnight when it opened in theaters across the country, Lynch’s breakthrough feature was a meditation on married life in an endlessly nocturnal future noir, where every crying “baby” is a nightmare, and every flirtation with infidelity beckons damnation.

Like Fellini turning director’s block into 8½, novelist Stephen King turned writer’s block into The Shining, with his surrogate, Jack Nicholson, going berserk in the haunted hotel of director Stanley Kubrick’s adaptation. When this film opened, great debate ensued as to just how terrifying it is. But audiences soon realized it didn’t matter. You may not need to be a novelist to realize the most terrifying moment isn’t the elevator of blood but hundreds of manuscript pages that only say: “All work and no play makes Jack a dull boy.”

The origin of what was, by some measure, the best and wittiest of the ’80s blockbuster franchises like Halloween and Friday the 13th. Evoking the surrealism of dream language, the forbidden desires and fatal furies of Elm Street’s teens hatched more than a quarter century of sequels, spin-offs, and remakes, not to mention the careers of Patricia Arquette, Johnny Depp, and—as serial killer Freddy Krueger—Robert Englund, who eight years earlier was up for the role of Han Solo in Star Wars.

Anticipating the horrors of the 21st century (there’s a reason this resonated in the first year of the Trump presidency), the horror film caught up with the times, or the times caught up with it. On Elm Street and a thousand suburban streets like it, where there are no more childhood dreams to be haunted, Jordan Peele’s paranoid satire finds a white zombie America frantically searching for its lost soul, assuming it has had one. The Fourth of July was Halloween all along.