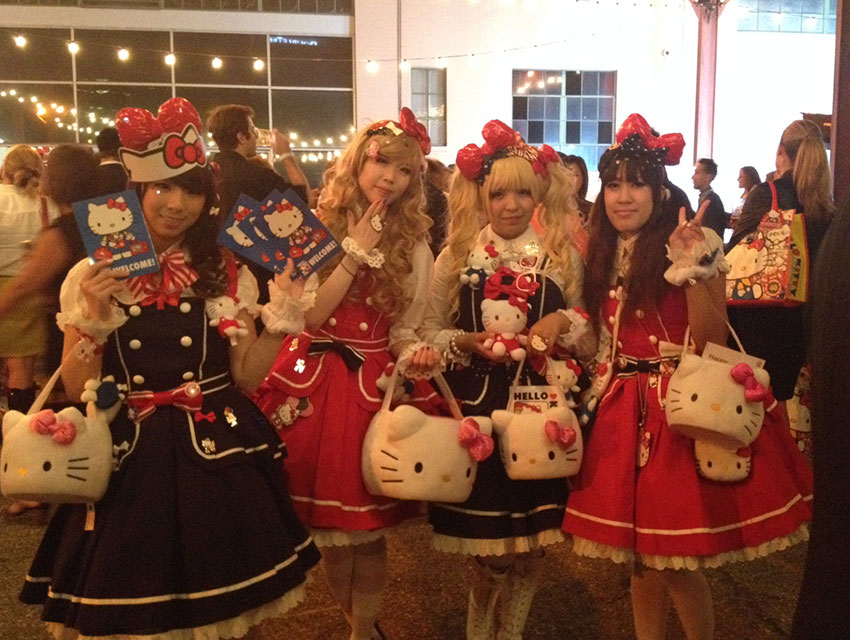 In case you somehow missed it, Sanrio’s first ever Hello Kitty Convention happened this weekend. And it was a big deal. The sold out confab, which started on Thursday and ended on Sunday, brought fans from around the world to celebrate the icon’s 40th birthday. (You can catch the Hello Kitty exhibition next door at JANM through April 26, 2015.) Here are the ten best things that happened at Hello Kitty Con, which should really be an annual gathering.

1. Katy Perry: Sporting a cute Hello Kitty dress and pigtails the rocker showed up on the first day of the convention to get a Hello Kitty tattoo on her finger. That’s dedication.

2. Hello Kitty Tattoos: Free tattoos of the bowed third grader herself, which were available for free at Hello Kitty Con, were immensely popular. The tattoo artists were booked from the minute they con opened to the moment it closed. How kawaii is that?

3. Guys Love Hello Kitty: This panel discussion proved that Hello Kitty isn’t only an icon for women; men love her too. It’s liberating that future generations will know it’s ok to adore the figure, regardless of gender.

5. The First Hello Kitty Coin Purse: That’s right. The first Sanrio item to bear Hello Kitty’s image, a coin purse from 1974, was on display in a glass case that was presided over by an attentive security guard.

6. A Life-Size Coin Purse: On the bright side, fans who wanted a photo with the coin purse could pose in side of a six-foot-tall replica of the item. We aren’t accountable for whatever goofy faces you made while posing.

7. Hello Kitty Café Food Truck: That adorable rose pink truck standing in the middle of MOCA’s food court lot? It was hands-down the most popular food truck at the event while offering a sneak peek of the future Hello Kitty Café. It sold few sweet treats such as apple cake pops and donuts along with limited edition water bottles and bags.

8. Hello Kitty’s Supercute Friendship Festival: Speaking of sneak peeks, many of the live performances on the stage will be part of Sanrio’s upcoming live entertainment show, which debuts in 2015. Performances included a musical extravaganza with Badtz Maru and the rest of his gang.

9. Yuko Yamaguchi: In the Sanrio world, she’s as famous as Steve Jobs. Though she wasn’t the brand’s first head designer (she is its third), she is its most enduring and influential. She’s the one who is tasked with distilling and disseminating Hello Kitty’s ideas about friendship and family. Every day of the convention she signed multiple autographs and posed with fans.

10. Dedicated Fans: 25,000 tickets were sold for this weekend’s event, and they sold out weeks before the convention began. Hello Kitty is a global icon, but she wouldn’t have arrived there without the millions of people who have loved her during the last forty years.