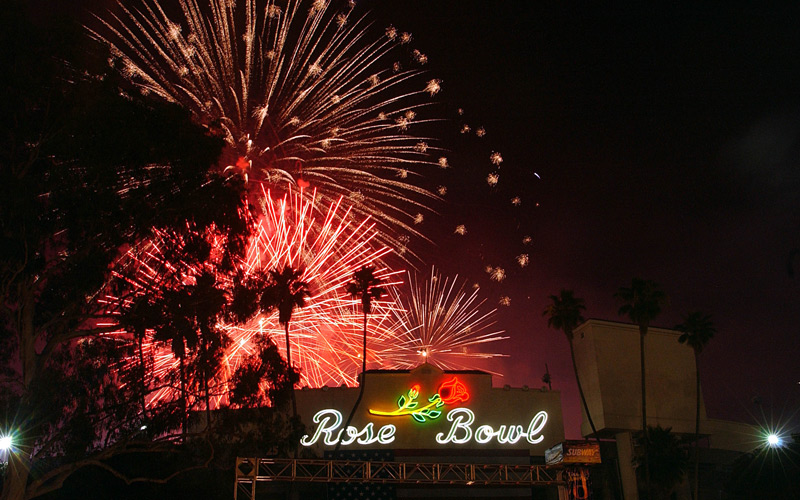 Disney’s Celebrate America
WHERE: Disneyland
WHEN: July 1-4, 9:30 p.m.
WHAT: Four nights in a row, Disneyland visitors will experience “A Fourth of July Concert in the Sky,” a 15-minute fireworks show accompanied by patriotic tunes.

Malibu Fireworks
WHERE AND WHEN:

WHAT: Fireworks lit from barges off the coast. All shows are between 9 and 10 p.m. Expect a high volume of barking from local Pomeranians.

July 4th Fireworks Spectacular With Pentatonix
WHERE: Hollywood Bowl
WHEN: July 2, 3, 4 at 7:30 p.m.
WHAT: Three-time Grammy winner Pentatonix is celebrating Independence Day three nights in a row, and each performance will feature the Hollywood Bowl Orchestra, the U.S. Air Force Band of the Golden West, and of course, fireworks.

4th Of July Community Festival and Fireworks Show
WHERE: Exposition Park, South Lawn
WHEN: July 4, opens at 11 a.m.
WHAT: This free event, now in its fourth year, claims to be the largest fireworks festival on the West Coast. Head to the L.A. Memorial Coliseum for a day of family fun, including live music, food, games and activities.

All-American 4th of July
WHERE: The Queen Mary
WHEN: July 4, opens at 2 p.m.
WHAT: The legendary ocean liner’s July 4th offerings include family games, historic tours, a patriotic movie in the Queen Mary Theatre, a performance by the Pointer Sisters, and a pyrotechnics display accompanied by patriotic music.

Americafest
WHERE: Rose Bowl
WHEN: July 4, opens at 2 p.m.
WHAT: Now in its 91st year, this annual Rose Bowl event invites you to celebrate America with a family fun zone, food, and live entertainment, leading up to a fireworks show over the stadium at 9 p.m.

Redondo Beach 4th Of July Fireworks
WHERE: Seaside Lagoon
WHEN: July 4, opens at 2 p.m.
WHAT: Arrive early to claim a prime viewing spot for the fireworks, and spend the day swimming, riding inflatable slides, and doing arts and crafts while a DJ plays patriotic music.

4th of July Block Party
WHERE: Grand Park and The Music Center
WHEN: July 4, opens at 2 p.m.
WHAT: Take public transportation downtown for this free community celebration and fireworks show, because many streets and parking lots in the area will be closed. L.A.-based musicians and DJs perform live on two stages.

July 4th Late Night & BBQ
WHERE: Aquarium of the Pacific
WHEN: July 4, opens at 5 p.m.
WHAT:  Before and after this all-American barbecue dinner, bond with the sea creatures guilt-free—there’s no seafood on the menu. Tickets include after-hours access to the exhibits, and a view of the Queen Mary fireworks display over the harbor.

Baldwin Park 4th of July Fireworks Spectacular
WHERE: Sierra Vista High School
WHEN: July 4, opens at 5 p.m.
WHAT: The high school will host a live concert featuring Queen Nation, a tribute to the legendary rock band Queen, starting around 6:45 p.m. If you’re not into the whole ’70s Brit rock scene, they also have gladiator jousting, a 26-foot slide, and an obstacle course.

July 4th Fireworks Extravaganza
WHERE: Warner Park, Woodland Hills
WHEN: July 4, opens at 6 p.m.
WHAT:  The Valley Cultural Center presents a free concert by the San Fernando Valley Symphony Orchestra entitled “Made in the USA.” It will be followed by a 15-minute fireworks display, which is expected to be watched by 60,000 people.

4th of July Fireworks & VIP Celebration
WHERE: CBS Studio Center
WHEN: July 4, 6 p.m.
WHAT: The Studio City Chamber of Commerce isn’t holding an outdoor festival this year. Instead, it’s hosting a VIP event with food and drinks from local restaurants, live entertainment, and rooftop viewing of the fireworks show.

July 4th at Dodger Stadium
WHERE: Dodger Stadium
WHEN: July 4, game starts at 6:10 p.m.
WHAT: Watch the home team take on the Arizona Diamondbacks, and stick around after the game for Independence Day fireworks presented by 99 Cents Only Stores. Each ticket includes a patriotic Dodgers T-shirt.

RELATED: This Bird’s-Eye View of Fireworks in Los Angeles is Madness

Disneyland Is Doing Away with Annual Passes and Fans Are Devastated

Take a Look Inside an Eerily Deserted Disneyland