Home Books The Best Books About L.A. That We Picked Up in 2020 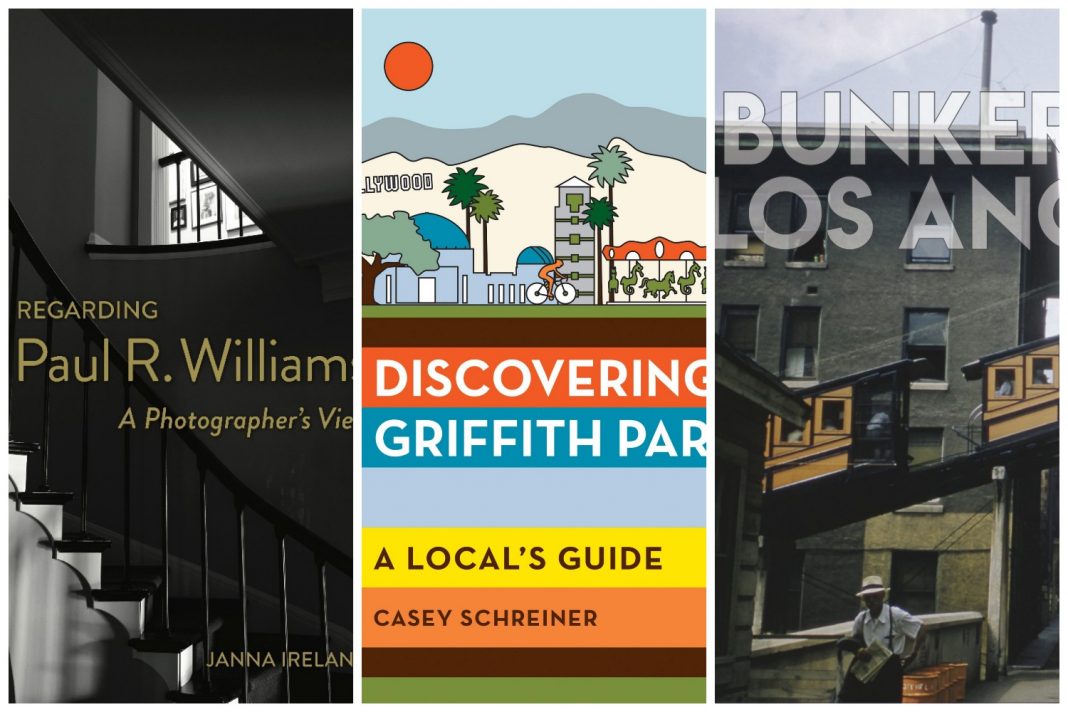 With our beloved city all but shut down, we found ourselves with a lot of extra time on our hands to read this year. Luckily, there were lots of good books about L.A. to delve into. Here’s a roundup of some of our favorites.

The recently completed SoFi Stadium in Inglewood, new home of the Los Angeles Rams and Chargers, was built on the site of Hollywood Park Racetrack. Horses had raced near Prairie Avenue since 1938 and photographer Michele Asselin captured the last days of the track in her book Clubhouse Turn: The Twilight of Hollywood Park Race Track. The big art book traces the history of the park from Seabiscuit to Hollywood stars, then visits with gamblers and jockeys, and pays a visit to the stilled betting windows and grandstands before they made way for the new football stadium.

What do you do when you find more than 200 of the rarest souvenir photo folders from the most famous jazz clubs of the 20th century? Write the entire history of a lost civilization! That’s what Jeff Gold, a music executive and collector did with the amazing stash of 1940s and 50s collectibles. The rarities were tucked inside a safe deposit box, alongside autographs, handbills, and concert tickets he bought from another collector. Famous musicians like Dizzy Gillespie and Louis Armstrong sometimes posed alongside stylish audience members when the roving photographer came to capture the scene. The book showcases long-lost clubs from Detroit, Chicago, and New York alongside the showrooms of L.A.’s Central Avenue. Interviews with jazz musicians who were there make it immediate. Quincy Jones tells how quickly he might have to sneak out the back door if something suddenly went down.

You could walk from downtown to Santa Monica—twice—and still cover less ground than the maze of trails in Griffith Park. A new hiking guide by the founder of Modern Hiker highlights the history, architecture, and wildlife of the park and illuminates the nooks and crannies of the 4,500-acre woodland visited by more than 10 million people a year.

Regarding Paul R. Williams: A Photographer’s View by Janna Ireland

The architect Paul Revere Williams has been gone for more than 40 years, but he’s been in the news a lot this year, from his long-lost archive ending up at the Getty, to the $75 million price tag on his Paley house in Holmby Hills, to the lavish book of photography by Janna Ireland. Her stark black-and-white photos capture details of some of the 2,000 buildings and homes that Williams, the first Black member of the American Institute of Architects, created for stars like Frank Sinatra, Lucille Ball and Desi Arnaz, and Bill “Bojangles” Robinson.

Abandoned and Historic Los Angeles: Neon and Beyond by Jason Horton

Jason Horton is a writer and comedian who loves to explore Los Angeles looking for landmarks. He is especially taken with places that have fallen into disrepair or been completely forgotten by their owners. In Abandoned and Historic Los Angeles: Neon and Beyond, he shares his favorite architecture, signage, and urban patina.

The Great Crump Presents His Magic: The Art of Rolly Crump | Foreword by David Copperfield

Hepcat be-bopper Rolly Crump started his career in animation, was recruited by Walt Disney to move to Imagineering, and kept his evenings open to craft bawdy art for beatnik-era jazz clubs and coffee houses. Crump sculpted tikis for the Enchanted Tiki Room and adapted Mary Blair’s paintings into the magnificent kinetic façade for it’s a small world. His baroque designs with muffled messages like “Fly Heroin Airlines” were charmingly set in a sea of Victorian frippery that made even raunchy pieces absolutely charming. Full disclosure, your Ask Chris columnist wrote the biographical essay on the artist for this book which was adapted from a career retrospective at the Oceanside Museum of Art in 2017.  Crump, 90, retired near the seaside community in the 1990s.

If you’ve ever read a Raymond Chandler novel, you know Bunker Hill. Nathan Marsak resurrects the long-gone neighborhood in his new book, and a companion zine called Bunker Noir! The grand mansions and stylish apartments of 1900 had mostly gone to seed by the time the city bulldozed the neighborhood of pensioners, along with “alcoholics, the gaunt packrats, the working girl,” as novelist John Fante wrote. Marsak’s extraordinary photos and pop-infused prose make the lost kingdom come alive. Bunker Noir folds decades of true crime excised from the more genteel book into a hard-boiled tabloid filled with lurid suicides, murders, and mysterious fires on the lonely hill.

Gas and Glamour by Ashok Sinha

Ashok Sinha racks up a lot of miles on his rental car when he comes to visit his family in Los Angeles. For the last four years, the New York-based photographer has been hunting for L.A.’s midcentury roadside architecture and going to great pains to capture the sparkling neon and stucco motels, coffee shops, and gas stations for his new book, Gas and Glamour. “I had this idea of Los Angeles as sort of a dream city,” Sinha says. “In my fantasy, there should be a certain kind of a glow to it. That’s where I got the title.”

Abandoned Southern California: The Slowing of Time by Ken Lee

Ken Lee has captured the ruins of lost civilizations as they melt away in the desert. He visits old jalopies, shacks and cabins, and bits of folk art in the dark of evening, illuminated only by the moon and a single flashlight he uses to “paint” with light. The color-changing LED lamp is pretty much the only special equipment that Lee brings along on his nighttime excursions to forgotten locales in the rural California. The work is mostly solitary, but when Lee meets “explorers, weirdos, partiers, squatters, drunkards, security guards, or police” he just shows them his fantastical works and they usually let him get back to creating his art.