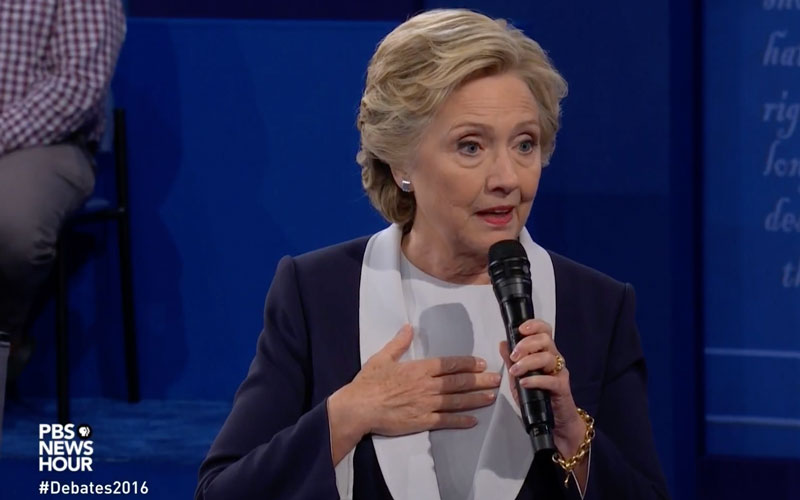 In the 48 hours leading to the moment the question was asked, Donald Trump had: 1.) been embarrassed by an audio recording of him bragging about sexually assaulting women 2.) organized a press conference with women who have accused Bill Clinton of sexual misconduct 3.) brought those women to the town-hall debate in St. Louis 4.) and during that debate (in what had to be a first) threatened to jail his opponent if he won the presidency.

At the end of the town hall, at the apex of our long national nightmare of a weekend, regular citizen Karl Becker asked, “Would either of you name one thing you respect in one another?”

HILLARY CLINTON: I respect his children. His children are incredibly able and devoted, and I think that says a lot about Donald. I don’t agree with nearly anything else he says or does, but I do respect that, and I think that is something that as a mother and a grandmother, is very important to me.”

In one brushstroke she injects humanity into what had been a grim death slog of a debate, she managed to NOT praise Trump directly, and she actually sort of insulted him, given that his ex-wife Ivana has said she raised the Trump children single-handedly, something past comments made by Trump seem to confirm. She closes it out by reminding everyone that she is a human woman with a family and real human emotions and not in any way a robot.

She also said some things about how important the election is and casually mentioned that she has put forth specific policies and plans – unlike some candidates – and that she would prefer to keep the personal attacks out of this, which is something we all needed to hear right then.