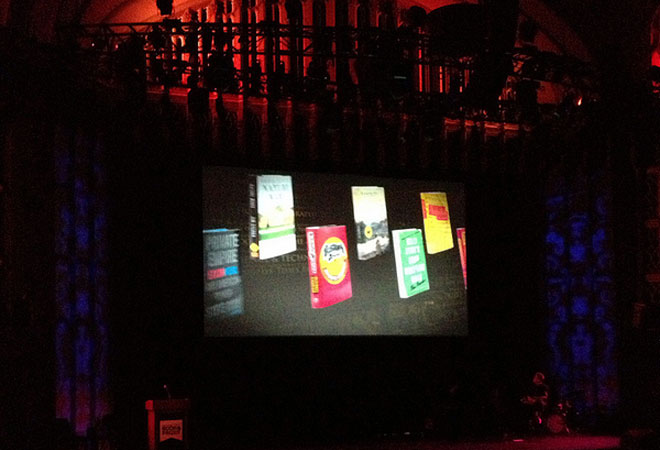 It’s hard to know what odds Nate Silver would have given himself to win the Science & Technology award at this year’s Los Angeles Times Book Prizes, but it’s fair to say he was the heavy favorite. However, as pop culture’s preeminent statistician knows (probably better than anybody) a smart bet isn’t the same as a sure thing. On Friday night Silver’s book about the vagaries of prediction, The Signal and the Noise, lost to Florence Williams’ book Breasts (you can probably guess the subject).

We’re not sure about the over-under on all these categories, but the other “upset” of the night came in the Fiction category when Ben Fountain’s debut novel, Billy Lynn’s Long Halftime Walk, beat efforts by several established authors including Michael Chabon and Lydia Millet. The tale, about an Iraqi war vet who returns home to participate in a glitzy halftime show, also won the National Book Critics Circle Award and was a finalist for the National Book Award. On top of that, Fountain gave one of the most charming speeches of the night.

In the “local boy made good” department, Sammy Harkham, owner of Family bookstore on Fairfax, won in the Graphic Novel/Comics category for Everything Together: Collected Stories (beating out such luminaries as Alison Bechdel and Chris Ware) while onetime Los Angeles magazine staffer R.J. Smith was nominated in Biography for The One: The Life and Times of James Brown. He lost to Lyndon Johnson biographer Robert Caro, who sent his college-age grandson to deliver a speech in his stead.

At the awards, which kicked off the Festival of Books weekend on Friday night, Canadian author Margaret Atwood was the headliner, and she didn’t disappoint. Her speech was funny, sincere, down to earth, and full of genuine enthusiasm for the craft of writing – even after doing it for more than four decades.

Biography
Robert A. Caro
The Passage of Power: The Years of Lyndon Johnson (Knopf)