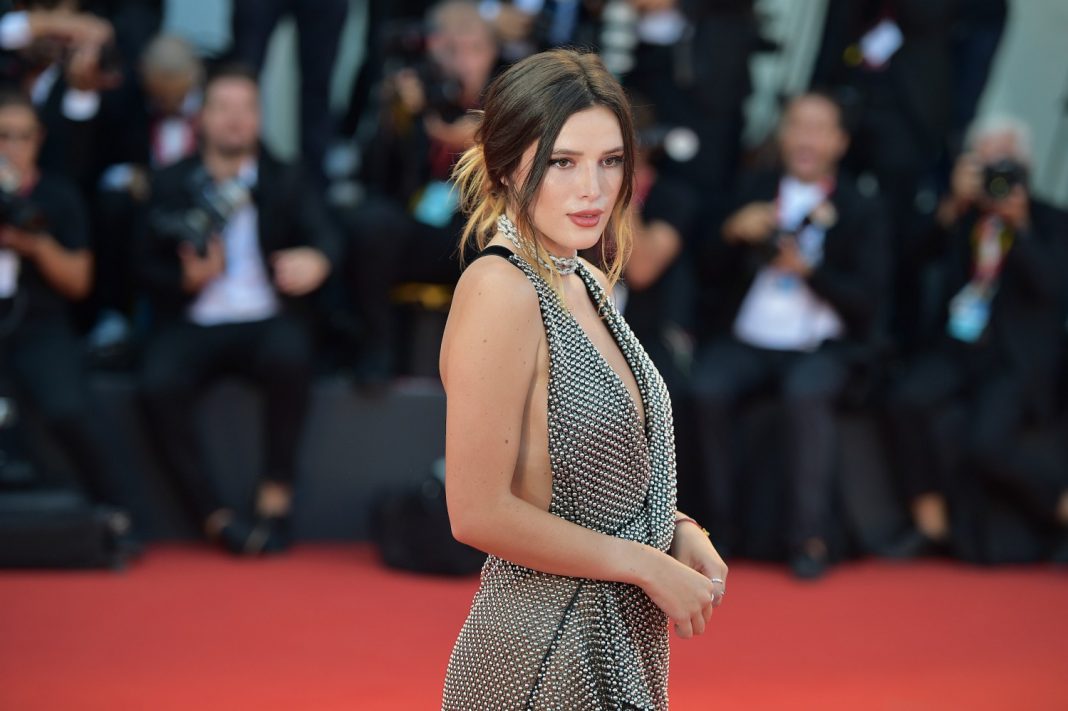 UPDATE: AUGUST 31, 2020 – Bella Thorne has issued an apology to critics of her use of OnlyFans.

“I hurt you and for that I’m truly sorry,” Thorne tweeted, addressing the sex workers who use the platform, and who felt her actions threatened their ability to continue doing so. “I wanted to bring attention to the site, the more people on the site the more likely of a chance to normalize the stigmas.”

In response to allegations that she charged customers for nude photos she did not intend to deliver, the New York Post reports that the offer may have come from a third-party that merely purported to be Thorne’s account, though the details remain unclear.

One thing that is clear is that the film project that Thorne claimed to be researching will not develop as she had planned. She had stated that she was working with Tangerine and The Florida Project filmmaker Sean Baker on the forthcoming feature, but Baker has made clear he is not involved.

“I’m NOT attached to this project,” he posted on Twitter. Baker says he had an initial conversation with Thorne about an idea that would have, at some point in the future, seen Thorne joining OnlyFans. “On that call, I advised her team to consult with sex workers and address the way she went about this as to NOT hurt the sex work industry. This has been the extent of my involvement.”

Erstwhile Disney Channel star Bella Thorne made headlines with her splashy debut on OnlyFans, an online platform that allows the fans of individual performers to pay for access to subscriber-exclusive content. Charging $20 per month for subscriptions, Thorne raked in $1 million in her first day on the platform, and a total of $2 million in less than a week—but not everyone is impressed with Thorne’s windfall.

“She doesn’t know anything about the true struggle of being a sex worker,” says Kel, one person who was creating content on OnlyFans before Thorne arrived. “She’s just another bored millionaire trying to be a culture vulture.”

Kel is among those who claim that Thorne not only too advantage of the platform, but pulled a “bait-and-switch” on her own customers.

Thorne allegedly sent out a message that promised fully nude photos of herself to users willing to pay $200 to open the file. The message didn’t contain what some users expected, triggering a wave of refund requests. As a result, the sources claim, OnlyFans has changed the rules for all content creators on the platform, setting caps on how much they can charge for pay-per-view content or receive in tips, and slowing the payment terms from seven days to 30 days.

Those changes may a have dramatic impact on OnlyFans creators who rely on their income from the platform, and have served to only further enflame the frustrations many existing creators have expressed over Thorne’s approach to the site.

“How dare she step into our turf, scam our customers, then cause such a mess that the platform decides to screw us over with ‘updated terms’ instead of banning her,” Kel fumes.

In theory, OnlyFans can be used by any type of content creator to publish premium content for paying subscribers, similar to services like Patreon or Substack. But, in practice, the platform’s primary users, and the ones with whom the OnlyFans brand is most associated, are sex workers. Particularly amid the pandemic, when in-person sex work has become more dangerous and jobs in many industries have simply dried up, a flood of adult content creators have found a way to ply their trades from wherever they are in the world.

OnlyFans was founded four years ago, but since March 2020, the company has reported that its user base has nearly doubled each month. Much of that is owed to the pandemic, but some of the increase in attention has come from a swell of pop-culture cachet associated with the brand, including shout-outs from stars including Beyoncé, FKA Twigs, and Cardi B.

For OnlyFans content creator Rebecca Madison, the attention those performers brought offered something positive that Thorne’s drop-in has not.

“I think one of the key differences between how Cardi B and Bella Thorne talk about sex work is that Cardi B is an advocate and an ally for sex workers. Whenever I’m having a bad day, I put on a Cardi B song and it makes me feel better because I know that there’s someone out there in an influential position who really understands me and cares about my community,” Madison says. “I also feel like Cardi B didn’t abandon us when she got famous, which is something I appreciate more than she will ever know.”

By contrast, Madison says, Thorne’s arrival on the platform felt like a dilettante “dabbling in sex work while ignoring the plight of sex workers,” and exploiting an audience built by professionals who put themselves at risk.

“It is a very challenging job, and in many ways our industry is stigmatized and criminalized, but the buzz around her story made everything seem light and fun, or even funny,” Madison says of the media hype around Thorne. “In reality, sex workers are marginalized, vulnerable workers who could really benefit from celebrities using their platforms to advocate for full decriminalization of the sex industry, which is what would keep us most safe from the harms associated with doing sex work.”

Critics say the problem is compounded by the perception that much of the work to build the platform’s prominence was done, in particular, by BIPOC sex workers, and Thorne, a white woman, was cashing in without acknowledging the labor of those individuals.

While numerous celebrities and entertainers from rappers The-Dream and Swae Lee to “Real Housewife” Sonja Morgan have set up accounts on OnlyFans to promote their work and offer online-exclusive content for those willing to pay a small fee, Thorne’s use of the site was somewhat different. Many audience members believed she would be using it for adult content—albeit more along the lines of provocative bikini pics—which may have fed the enthusiasm to fork over the $20 subscription price (creators on the platform set their own subscription fees; Cardi B, for example charges $4.99 per month).

Then came a statement from Thorne’s camp that she was posting to the service to research for a potential film role about people who actually make their livings doing so.

“It’s a feature we are researching as I’m living it currently,” Thorne told the Los Angeles Times regarding the potential film’s concept. “What are the ins and outs? What does a platform like this do to its users? What’s the connective material between your life and your life inside the world of OnlyFans?”

Thorne cloaking her dalliance in the online sex work space with the “acceptability” of an actress researching a role sits poorly with OnlyFans creator Savannah Solo.

“If she wants to hop on OnlyFans and sell some implied nudity, be my guest,” Solo says. “Sex work is a costume she gets to take off at the end of this ‘research’ with no impact on her career or personal life. She comes out millions richer, while smaller creators who are up front about what you can expect on their pages only have to work harder to gain the public’s trust. […] At least have the guts to say you wanted to make some extra money from your underboob.”

Solo notes that, while Thorne’s multimillion-dollar payday made headlines, many of those smaller creators often go overlooked.

“The media was focused on covering her record-breaking income and her ‘exciting new project’,” Solo says. “The media doesn’t like to report on actual sex workers reaching success, because they don’t want to promote it as a valid line of work.”

Madison is among the creators who have made a full-time living from the site but, amid the post-Thorne changes to its payment structure, wonders if she’ll be able to continue to do so.

“I used to work as an escort for many years, and then I left the sex industry to pursue mainstream employment,” she says. “When the pandemic hit and I wasn’t sure how my job would be impacted, I decided to start an OnlyFans as a sort of back-up plan.”

Soon that back-up plan was her sole source of income, something she says she feels grateful to have been able to do amid the health and economic crises. But the reductions in pay-per-view fees and tipping–something many on Twitter have attributed to OnlyFans scrambling to pay out Thorne’s surge of earnings and keep a steadier control on cash flow going forward–could bring that to an end.

“I found out about the changes from my colleagues on Twitter who were posting about it. I was really shocked and upset, and immediately logged on to my own account to see that the changes were, in fact, true. This is all happening so fast, and it’s hard to tell what the impact will be, but I expect to lose thousands of dollars per month in income as a result of these changes,” she says.

Another worry confronting OnlyFans creators is the concern that, as more mainstream celebrities and members of the general public join the platform–some perhaps inspired by Thorne’s success–the prices they can set for virtual sex work will eventually drop due to a saturation of supply, perhaps to the point where it’s no longer a viable source of income. And the very sex workers who are credited with building OnlyFans up may be the ones with the most to lose.

“The people who are going to be pushed out or impacted the most are the most marginalized folks because this could potentially limit profit even more so,” says OnlyFans creator Paige Savage. “As a Black and brown, plus size creator I am deeply concerned about finances, especially now. I watched how the last recession in particular hurt Black and brown women.”

Savage notes that the OnlyFans system is structured in a way that could penalize performers who ask their audience to send them funds through outside payment systems like Venmo or CashApp to supplement for the higher fees they used to be able to charge.

“My first gig straight out of grad school with a masters offered $36,000, and that was after hardball negotiating. For three years I struggled and accumulated credit card debt to get by and was on forbearance with my student loans,” Savage says. “OnlyFans had given me a moment to finally breathe and feel a bit more financially secure.”

RELATED: How L.A. Activists and Allies Are Fighting to End Violence Against Sex Workers

How L.A. Activists and Allies Are Fighting to End Violence Against Sex Workers