Home Uncategorized Behind the Scenes of Law & Order: Los Angeles 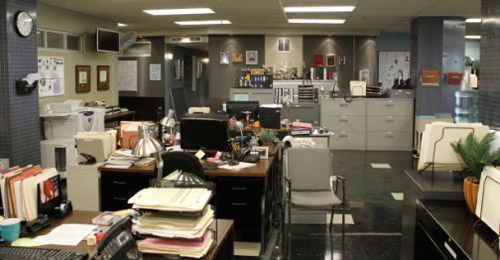 If you’re anything like me, you went into shock when Law & Order was cancelled in May, and only the announcement of Law & Order: Los Angeles soon after brought you back to your senses.

Since then, details of the new series have been few and far between. Skeet Ulrich was cast in early July. Terrance Howard was added a few weeks later.

Well, Law & Order: Los Angeles is now fleshed out and shooting at LA Center Studios downtown (the show premieres this Wednesday, September 29 at 10 on NBC) and a small group of bloggers were invited to tour the set last week.

Here’s what I can tell you: the production has put together a thoughtful look and feel for the Los Angeles series. The interior “bullpen” is very Parker Center (think blue tile columns, low ceilings, fluorescent office lighting, and views of the 110 Freeway), and even the interrogation room—complete with a shiny metal table just begging to be pounded—has windows that filter in natural light. It’s unmistakably L.A., almost sunny even.

After a Q&A period with executive producers René Balcer and Christopher Misiano and a quick spin around the set, actors Regina Hall and Alfred Molina, who shared a story about watching Law & Order reruns instead of going out when he first moved to Los Angeles with his wife, stopped by to chat about the show’s characters and plot.

So where in the city will ripped-from-the-headlines crimes be committed and bodies be discovered? “One [murder] is in Playa Vista. We felt that area was perfect because a lot of new condos have been built and the character who gets killed is a 25-year-old professional golfer,” said Misiano. “Another murder happens in Venice Beach and it is of a recently paroled member of a Manson-like family.” Did you just hear that ka-ching?