Home Uncategorized Behind The Mask 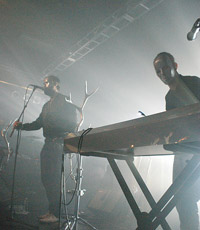 The anticipation was deafening. Swedish electro-pop trio Miike Snow hadn’t even appeared on stage, and already hundreds of fans at the Wiltern were pushing aggressively forward, eager to catch a glimpse of the elusive mask-clad group. Fog billowed from the stage and drifted toward the audience through pulsing lights.

And then—with an amplified base beat—they were there. And they were loud. The Friday night crowd shrieked to catch up, joining Andrew Wyatt with his brooding lyrics. Producing partners Christian Karlsson and Pontus Winnberg—also known as Bloodshy & Avant—also caught on, extending instrumental segments and reworking parts of “Cult Logic,” the show opener. The performers, whose faces were hidden behind simple silver masks, were nearly swallowed by the fog, while the crowd—and lights—danced wildly.

About half-an-hour in, something interesting happened: the masks came off. The music slowed down. Wyatt sat down at a piano—his back to the audience—for the chilling ballad “Sylvia.” Sure, the fog and lights were all around, but it felt like a moment of clarity for a group that constantly hides behind theatrics. And then there was a sound glitch, which sent the newly exposed musicians offstage.

For 20 minutes, which felt more like forever, sound technicians meddled frantically with the different apparatus, hoping to save the show. “This is like when you bring somebody home to finally make love, and you realize at the last minute that you don’t have a condom,” Wyatt joked, promising an extended encore to make up for the mishap. When Miike Snow finally reemerged on stage, the energy came with them—the sound boomed, the audience cheered. Fans picked up where they left off, jumping and singing and dancing throughout the next two numbers.

And then it was over. The group said their “thanks” and “goodbyes” and walked offstage. Most of the audience sat still in disbelief—was it really over?  They hadn’t even played “Animal,” the group’s initial claim to fame. Once reality sunk in and the lights went up, some booed as they walked out, others sang “Animal” loudly in the lobby. The band, for their part, left as mysteriously as they had entered, and ended as elusively as they had begun. Maybe it’s all part of the act?