Home Animals Have Some Beers. Tell a Zebra about Your Screenplay. “Brew at the... 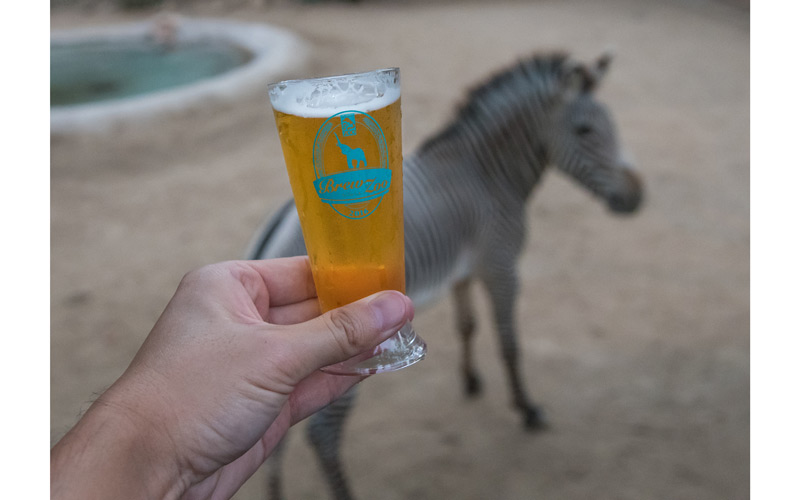 Photo by Jamie Pham/Courtesy of the LA Zoo

Friday, August 4, you can visit the L.A. Zoo after hours for Brew at the Zoo. The annual event features beers from dozens of craft breweries, live music, zookeeper talks, and a few animal encounters. (The animals will have access to their night quarters during the event, so many of them will not be on exhibit.)

This year, you’ll have a chance to taste a special beer made with ingredients selected by Hasani, a western lowland gorilla who lives at the zoo. Back in June, Hasani was given access to a variety of grains, fruits and vegetables, and he chose his favorites. Brian Herbertson, the brewmaster at Simmzy’s in Burbank, partnered with Hasani and express-brewed a beer using those ingredients. He said, “Hasani chose rolled oats, pilsner malt, and oranges, which I think will all come together to make a nice, unique Belgian blond ale with a citrus flavor.”

Standard tickets are $65 ($55 for members) when purchased online, and $75 ($65 for members) at the box office. VIP tickets (available only online) are $125 and include early entry, as well as access to two lounges with hors d’oeuvres. Standard and VIP tickets include a commemorative mug for sampling. Designated driver tickets ($25) include a souvenir cup and unlimited soft drinks. Pub-style food will be available for purchase. You must be 21 or over to attend.

RELATED: Which Zoo is Better? The Actual Zoo, or the Abandoned Zoo?

The L.A. Zoo’s Mandrill Babies Are Here to Make You Believe Again

You Can Now Feed the Giraffes at the L.A. Zoo