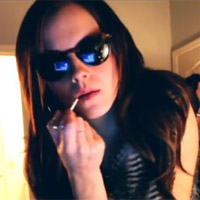 Sofia Coppola‘s got a new a movie, and (unsurprisingly) it’s all about the children of privilege — or at least the kids who steal from them. The Bling Ring, which features Emma Watson (a.k.a. Hermione in the Harry Potter films), follows a crew of teens who track the exploits of Hollywood celebs then burglarize their homes.

If the trailer is anything to go by, it’s got a very of-the-moment soundtrack. (If you like the Sleigh Bells song in the soundtrack, you can thank former Redd Kross drummer Brian Reitzell who’s the film’s music sup.)

As one of the title cards screams, the story is “based on actual events.” Those would be a series of 2008 and 2009 robberies whose victims included Lindsay Lohan and Paris Hilton. Eagle-eyed viewers will spot Gavin Rossdale (playing a pawn shop owner? A bookie? An aging rock star?) in the trailer. The film comes out on June 14.