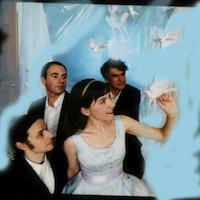 Is it possible to fall in love in one hour? Late Monday night, a crowd (most of them men) swayed, sighed, and listened as the effervescent Becky Stark and her band, Lavender Diamond, took the stage for the third installment of their month-long residency at the Echo. There was love everywhere. Premiering their new album Incorruptible Heart (available September 25), the band danced through a set comprised mainly of new songs that highlighted Becky’s beautiful vocals and mesmerizing stage presence.

We had a chance to speak with Becky before the show and ask her a few questions regarding the band’s sophomore album. It’s impossible to convey her bubbly, giggly tone via text, so imagine a quiet, shy Marilyn Monroe mixed with a dose of Linda Ronstadt and a dash of Amy Adams thrown in.

Tell us a little bit about the album and the title, Incorruptible Heart.
Incorruptible is from the French words coeur meaning “heart” and rupture, which means “breaking” and “to give.” I think that’s why the record has so many different sounds. It’s as if the sound got broken open into all these different pieces. But hopefully there is one unbreakable, cohesive part. One unbreakable heart of the record that gives it some unity and connection to the raw beauty of the world.

It’s been five years since your last album, Imagine Our Love. How are the two albums different?
I feel like this record is so wild; the range of emotion is so vast. These songs started as these crazy heartbroken songs, out of this emotion that was so shattered and fractured. For a long time I didn’t know how to share this music because I felt like it wasn’t ready. It was too broken. I didn’t want to bring shards of glass into the world. I was working on this record as a solo record for a couple of years. It sounds kind of funny, but I was going to call it “Agony, Agony, Agony.” It was kind of a joke but kind of serious. So it just took some time. I felt like I had to process these sounds, let the experience transform, and let the experience of this shattering turn into an experience of relief. That’s the range of experience on this record.

How has your residency at the Echo been? And playing the new album in front of an audience for the first time?
It was nerve-racking and excited. We had a hard time figuring out how to play it live, at first. But what I love so much about the creative process is being able to apply it to the live show and making music in that free-fall where you have to make something from nothing. You are freaking out and don’t know how to do it, then you just move forward and try to get it to reveal itself. To be honest I started having computer dreams beforehand because we were doing so many samples and so many computer samples. It’s a whole new era.

In addition to touring, Lavender Diamond is releasing a music video/aerial ballet (one of Stark’s longtime dreams) for the song “Everybody’s Heart’s Breaking Now.” Becky is also scheduled to tour with the Railroad Revival Tour, joining Willy Nelson and John C. Reilly on a musical train journey from New Orleans to Oakland. You can catch her next Monday, Sep. 24, at the Echo.