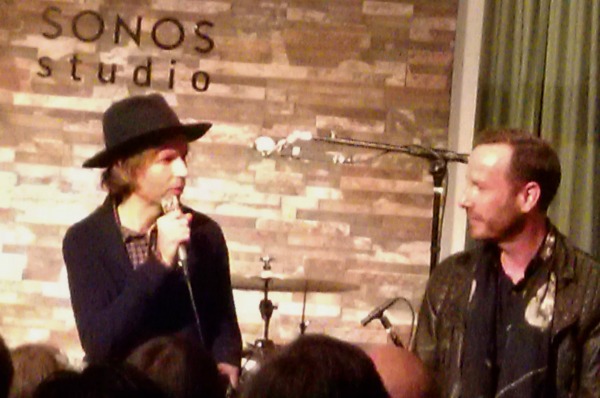 Last December, Beck sent blogosphere tongues wagging when he released his latest album, Song Reader, as a set of artfully illustrated sheet music—and nothing else. The nostalgia move was about empowerment, the artist explained, and remembering a time when making music meant family sing-alongs around the piano. The concept took off, and fans have been busily uploading covers to the Web ever since.

Last night, a party at Sonos Studio on La Brea feted the opening of the new Song Reader exhibit, on display through March 24. Guest performers Amy Regan, The End of America, Adam Green & Binki Shapiro, and Tim Heidecker and Nick Thorburn from Islands brought compositions like “Please Leave a Light On When You Go” and “America, Here’s My Boy” to life. Beck’s brother-in-law Giovanni Ribisi and Wreck-It Ralph star John C. Reilly both made cameos. A mini-recording studio winking like a spaceship dashboard (and disabled for the party) invited attendees to lay down their own versions. Art displays showed off the album’s gorgeous cover designs.

Once again, Beck—who attended, but did not perform—proved that when it comes to this album, it’s really not about him.

Jason Bentley, host of KCRW’s Morning Becomes Eclectic, led a Q&A with Beck and Jordan Bass, the McSweeney’s editor who helped create Song Reader. “There’s something so presumptuous about the project, which is one of the reasons I kept putting it away,” the singer said. “Who’s going to want to take the time to learn the song? It’s a commitment.”

Generating interest—especially among the 200-plus people packed into the venue—doesn’t appear to be a problem. Dozens of versions have already been uploaded to McSweeney’s site at songreader.net. Asked how royalties get divided if a fan’s version goes viral, Beck admitted he hadn’t thought that far ahead. “If somebody does that,” he said, “that’s cool too.”

Amanda Qassar, a fan who won tickets through The Believer, McSweeney’s non-fiction monthly magazine, said she initially felt left out from the project. “I am not a musician. I can’t read music. I felt cheated.” But she conceded, “In this digital world, I do appreciate the value of music as a one-time experience.”

Jeff Bauer, a musician who recorded stripped-down versions of Beck’s piano compositions for the exhibition, saw deliberation in the singer’s avoidance of the spotlight. Releasing his own versions would defeat the whole grassroots approach, Bauer said: “That would taint your performance, because you’d try to make it sound like him.”

No danger of that now. The singer said this gem from two Birmingham gentlemen—tapping bongos before a flowered backdrop while one of them croons “Old Shanghai”—had “made the whole project worth it.”