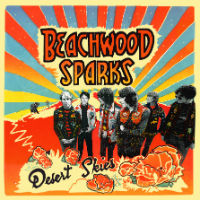 When bassist Brent Rademaker met guitarist Chris Gunst at a party in Burbank in the mid-1990s, the two immediately bonded over their mutual love of ’70s West Coast country pioneers Flying Burrito Brothers. After working together in a string of more or less successful bands, Rademaker and Gunst founded Beachwood Sparks intending to explore that special brand of California country that emanates from the canyons and hills. Ever since, the band has existed in different iterations centered around the trio of Rademaker, Gunst, and multi-instrumentalist Dave Scher.

Reminiscent of The Byrds, The Eagles, and Flying Burrito Brothers, the psychedelic country rock of Beachwood Sparks has inspired countless other musicians. November 26 marks the release of the band’s fourth studio album, Desert Skies, even though it was recorded in 1997. Here are eight facts we learned about the alternative country trailblazers.

❶ At some point in the mid ’80s, Rademaker attended a Poison concert with his brother Darren in their hometown of Tampa, Florida. After the show, the brothers snuck backstage to hang out with the band. “One of them was like, ‘You should come out to L.A.,’” Rademaker recounts. “We weren’t really into the whole metal thing but we loved the DIY spirit of West Coast indie rock and punk, and we were both avid surfers and skateboarders.”

❷ After relocating to L.A. in 1986, Rademaker was looking to form a band. “Being into indie in L.A. was hard,” he explains. “Because it’s the seat of the music industry, people are so focused on ‘making it’.”

❸ Rademaker’s first band, Further, which included his brother Darren, released two albums on Geffen. They were compared to Sonic Youth and Dinosaur Jr, whose J Mascis later contributed guitar parts to Beachwood Sparks’s sophomore album, Once We Were Trees.

❹ When Rademaker and Gunst started jamming, Rademaker was living on Sparks Street in Burbank. People headed over there knew that Rademaker’s street was the one right after Beachwood. Thus, Beachwood Sparks was born.

❺ The band laid down the tracks for Desert Skies in 1997 in a psychedelic session recorded in Josh Schwartz’s home studio in Sierra Madre (Schwartz played guitar back then and wrote a lot of the material). Following the recording session, the band underwent lineup changes and the recordings were lost.

❻ “I had a handful of tracks on different tapes,” Rademaker explains. “When we started looking around, we found tracks as MP3 files online. They were circulating on fansites and blogs. We had to email people to get hold of our own songs.”

❼ In August of 1997, Beachwood Sparks did a residency at Silver Lake’s Spaceland (now known as The Satellite), the jam ethos of which, Rademaker says, is captured on the Desert Skies recordings. They played five Mondays in a row. By the last show, people were lining up down the block to get in. “We’ve always worn western outfits when we perform,” Rademaker says, “and you could tell the people who had seen the first show, had gone out and bought similar gear for the last performance. People loved it. Those Monday nights felt like Saturday nights.”

❽ Beachwood Sparks are still playing and performing, although they won’t be replicating the six-piece sound of Desert Skies anytime soon. For now, the trio is focused on recording new material. “We were offered a deal to write the music for a Super Bowl commercial, which didn’t work out,” Rademaker says. “But it did make us want to record again. Country is in Nashville today. From 1968 to 1972, there was such a thing as West Coast country rock. We want that back.”