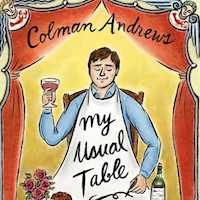 Colman Andrews’ new book, My Usual Table: A Life in Restaurants (Ecco, $26), is featured in our April issue (on newsstands now!). The memoir looks at his childhood through the windows of some of our city’s most legendary restaurants. Though he’s now based on the East Coast, Andrews grew up in Beverly Hills. His memories of Scandia, Chasen’s, Spago, and more are covered in chapters that span a life full of eating well.

One of America’s most prolific food writers, Andrews is perhaps best known for co-founding Saveur magazine in 1994. He served as restaurant editor for Gourmet, has won dozens of awards for his work, and has written about food for nearly every Los Angeles-based publication, including Los Angeles magazine. Andrews now serves as the editorial director of thedailymeal.com, a food mega-site he launched in October 2010. We were recently able to speak with him over the phone about his new book, restaurant trends, and his usual table.

I have to say, I’m a bit surprised that you’ve already come out with a memoir. Are you about to retire?
[chuckles] No, I’m not getting ready to retire. A lot of my writing contains autobiographical elements, and I’ve written about many of these restaurants before. It seemed like time to put some of these things down while I could still remember them. I have a lot of notes, of course, but this seemed like the right stage to share them.

How long have you been based on the East Coast?
I suppose… well since the end of 1994, or just about 20 years now.

How often do you return to L.A.?
At least once a year. I try to visit more often, or when I can. Sometimes I go to Northern California. I was just there over New Years’.

Your new book tells your story by using restaurants as markers of place and time. When you return to L.A., do you ever visit your old stomping grounds to revisit those memories?
Well, I do sometimes go back to Spago, but it’s so different now. It’s very nice, and the food is better than it ever was, but it not the same. It’s very ambitious. You could say it grew up. But it’s not what I remember.

El Coyote is the only restaurant you write about in My Usual Table that still exists in its original form, in its original location. Do you ever visit it when you visit L.A.?
I haven’t been there recently. The last time I went was just before I left L.A. in ‘94. I doubt much has changed.

Is there a sense that you’ve seen it all? That the changes in the food world don’t seem as exciting or as relevant?
The fact that I work all day every day is part of it. I don’t have time for lunch. My wife and I still go out and plan trips around food, but it’s not the kind of thing that it used to be when there were certain places I went to all the time.

How has the dining landscape changed?
I don’t think I say this in so many words in the book, but one of the undercurrents here is that there are fewer and fewer restaurants now that fulfill the kind of function that the restaurants I wrote about used to fulfil. The comfort, or warm welcome, are not at the top of the list for most people starting restaurants now. Some of the best restaurants in N.Y. and L.A. and Paris and Rome—they are places that are not about the old-style restaurant experience. They’re about serving interesting, good food, having a buzzy sort of atmosphere, and attracting a certain clientele. They are good restaurants, but they are chef-driven, not owner-driven. Momofuku is a very uncomfortable restaurant. You sit on backless benches basically. It’s not the place where you’d sit down in a comfortable booth and talk for hours.

The restaurants I grew up with had that feeling of being closer to the original meaning of restaurant, a “restorant.” It’s not to say you’re not getting other good things in place of it. A lot of the food is really really good, but it’s a different thing.

A lot of it has to do with the fact that everyone is used to what they grew up with. From the beginning, the restaurants I grew up with, they weren’t chefs’ restaurants, and no one knew the name of the restaurateur—everyone knew the front man. Because they weren’t chef-driven restaurants, they were more consistent because the menu never changed if the chef quit. I’m not saying this is a better system, it’s just the way things were. It was much more about the experience, about the way the place felt. You wanted the food to be good, but it wasn’t near the level of what you can get today.

You write about Wolfgang Puck in the book.
He was the first celebrity chef. There were other chefs who had household names in other cities. Andre Soltner in New York. Paul Prudhomme in New Orleans. But Wolfgang became internationally recognized relatively quickly.

When you went to Eleven Madison Park, (noted New York restaurateur) Danny Meyer was at the helm. Did that restaurant strike you as more of a “restorant”?
Eleven Madison Park is a marvelous restaurant, as I say in the book, but it’s a chef’s restaurant—not a diner’s. And even moreso today.

So many of the L.A. restaurants you mention in the book—Chasen’s, Scandia, the original Trader Vic’s, Cafe Swiss—are no longer. What restaurant do you miss most?
Scandia. If I could wave the magic wand… but also Port’s was tied up with my emotional life and romantic life. West Beach and Rebecca’s, too. I enjoyed them so much for the food and everything else. But, it’s hard to say things like that because I’m sure it’s different. It’s like revisiting old friends and old girlfriends and if you went back and saw them exactly as they were you might not like them so much. People always ask people that write about food: What’s the best meal you ever had? I hope it’s the next one I have. I’d rather look toward the future.

Ruth Reichl wrote about her affair with you in her memoir, Comfort Me With Apples (Random House, 2002). It’s interesting to read the other side of it now in your book. Are you still in touch with Reichl?
I am. We have lunch a couple times a year. She’s not in New York City a lot of the time. They [her and her husband] have a house upstate and spend part of the year in L.A. We’ve talked about doing an event together at some point around the book.

I enjoyed reading about your obsession with tiki. It’s back! How do you feel about its renaissance?
Tiki has been coming back for a decade or more. There’s obviously a kind of two prong thing there: on the one hand, there’s a fascination with complex cocktails—you can’t be taken seriously as a restaurant today unless you have a cocktail chef or mixologist. It’s expected as much as the food now. I was just talking to someone this morning in an editorial meeting about one of the old tiki cocktails that’s trending now… The Corpse Reviver—I think there’s that aspect, there’s a fascination with complex cocktails, but on the other hand there’s also the element of camp and irony that tiki brings to the seriousness of it.

Since you finished writing the book, have you found any new “usual tables” in L.A. or New York?
There are places I try to go to whenever I’m in L.A. Nothing I mention in the book, but I always try to go for Thai because there’s not a lot of good Thai near me now. Jitlada is a favorite. I like Lucques. I trust whatever Piero gives me at Valentino. The Grill on the Alley is one of my favorite lunch spots; I always get their chicken sandwich. In New York, I hope to find another favorite table out at restaurants again, but until I do the one at home suits me now just fine.

To read more from Colman Andrews, pick up a copy of the April issue on newsstands or subscribe now