Home Uncategorized Be Queen for a Zippity Doo Dah Day 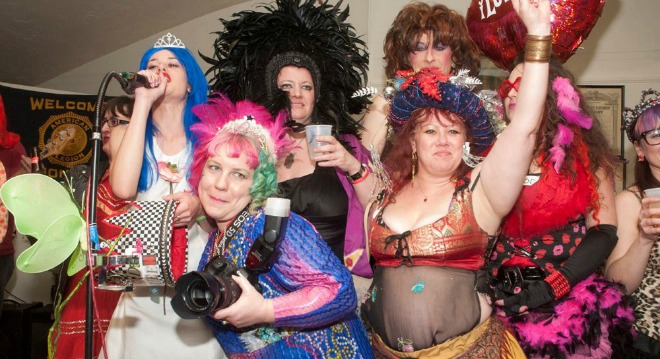 A few weeks from now, the brash, kooky cousins of Pasadena’s storied Rose Parade will carouse their way down Colorado Boulevard. The Occasional Doo Dah Parade is coming, and the organizers are ready to crown their queen. Want to try out? Dig out your candy-covered Day-Glo scepter.

Started in 1978 the parade has recurred sporadically ever since, sometimes celebrating the same anniversary twice (when organizers lose track) or jumping a year (even Doo Dahs shudder at the number 13). Clad in outrageous, improvised costumes, participants walk or wheel their way down the boulevard atop homespun floats, perform in group acts like the Synchronized Briefcase Drill Team, and sometimes show off irreverent signs with a social or political bent (“Trolls vote. Shouldn’t you?”; “I might look like a girl but I don’t hit like one”; “Life begins at first base”).

Tryouts for the 36th Parade (which occurs April 27) will be held this Sunday at the American Legion Bar in East Pasadena, and they’re open to any age, race, gender, and body type. Importing your own royal entourage is optional, bribing the judges with libations is strongly encouraged, and sassiness is a must. They’ll provide the mic and sound system.

Upon ascension to the throne, previous winners have taken royal monikers like Naughty Mickie, Queen Skittles, and Cherry Capri. May the best name win.