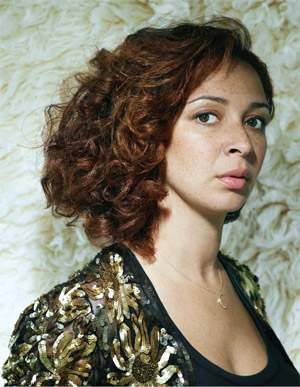 Have you met the squirrels of the Mildred E. Mathias Botanical Garden? If you’ve visited the hillside grounds, which sit on the southeastern flank of UCLA, you already know these aren’t ordinary squirrels. They’re unusually large and sleek and display a remarkable commando-style bravado when menacing people for handouts. Maya Rudolph grew up next door to the garden. She liked how wild it was, loved getting lost in it, and today she has returned there for the first time since spending eight seasons on Saturday Night Live, where she became famous for caricatures like a big-as-life Oprah Winfrey, a larger-than-life Beyoncé Knowles, and a supersize Donatella Versace. On adjacent Hilgard Avenue, bus traffic streams by, but along the garden’s winding pathways, amid tracts of bamboo and clumps of wet fern, everything is cool and quiet. Somewhere North America’s tallest dawn redwood hides in the morning fog, when out of the blue Rudolph finds herself accosted on two fronts by the Mathias squirrels.

“Watch out!” says Rudolph, pointing left. “That one’s going for our throats!” She makes a swatting gesture and then cocks her head. “My God, this is rather terrifying,” she says. “They’re not backing down.”

Rudolph sidesteps and finds a bench beneath a shedding eucalyptus. She has big brown eyes and a tiny frame that work magic on men, and she is wearing a baggy sweater that nearly swallows her whole, with her hair pulled back in a scrunchie, where it opens into a frizzy blossom. She is the daughter of the music producer Richard Rudolph and the soul singer Minnie Riperton, who died of breast cancer two weeks before Maya’s seventh birthday. The couple had met in Chicago but left after facing eviction from their apartment, taking a drawn-out road trip in search of warmer weather and the right place to raise a biracial family. They stopped in Gainesville, Florida, in 1972, where Maya was born, and then moved to Laurel Canyon to reengage their music careers before settling in Westwood.

“This was my stomping ground,” says Rudolph, gazing onto a wooded ravine. “It all seemed vast, and then there was the W nearby, which was called the Westwood Marquis, and it was very fancy. They had an elevator that only went up one floor, and I’d ride it up and down as a kid thinking, ‘This is the life!’” Suddenly Rudolph freezes. “Don’t move,” she whispers. “This one looks rabid.” Rudolph lunges at the squirrel, shouting, “Get out of here!” and then sits back in astonishment.

“Oh, my God, he’s got little balls!” she gasps. “He’s putting those things out there like a dog! I’ve never seen squirrel balls before.”

Three years ago Rudolph had a daughter, Pearl, with her partner, Paul Thomas Anderson, the director of There Will Be Blood, Boogie Nights, and Magnolia—the last about a collection of mostly miserable people living in the San Fernando Valley who in various ways seem linked by fate. The story of how Rudolph ended up in her new movie, Away We Go, would easily fit into Magnolia’s plot. The film, which is cowritten by the novelist Dave Eggers and his wife, Vendela Vida, follows Burt and Verona, a mixed-race couple on a cross-country trip in search of a place to raise their expected child.

“It was like a dream when I first read the script,” says Rudolph, “because it touched on so many aspects of my life. Verona herself was described as ‘mixed race,’ she was born in the South, and she has lost both parents.” Eggers, too, lost his parents—he wrote of the experience in A Heartbreaking Work of Staggering Genius. After reading the script, Rudolph felt compelled to seek out the novelist and his wife during a trip to San Francisco, their hometown. “I became so focused, I kind of stalked them a little,” says Rudolph. “Then we got together, and it turned out we were both first-time parents whose kids were born five days apart. It was spooky.”

Away We Go costars John Krasinski from The Office and looks like no other starring debut from an SNL cast member. It’s not Wayne’s World or Animal House. It’s a small, sweet-natured effort, winsome and often darkly funny, directed by Sam Mendes—nothing like his icy dioramas of domestic life, Revolutionary Road and American Beauty. The film lets Rudolph explore territory that Bill Murray took a couple of decades to reach in Lost in Translation. “Saturday Night Live is my first love,” says Rudolph, “and I think there’s an expectation for members when they star in their first film. I would have done Animal House if they’d offered it, but this opportunity was rare—it could have come 20 years from now.”

As a kid Rudolph dreamed of being on SNL. “I already had the Roseanne Roseannadanna hair,” she says. She went to St. Augustine by-the-Sea elementary school in Santa Monica, where she appeared onstage with fifth grader Gwyneth Paltrow, then to Crossroads, where she was coached in improv by another student, Jack Black. In 1996, after graduating from UC Santa Cruz, she enrolled in the Groundlings. “I knew Phil Hartman had gone there,” she says, “and I knew it was a feeder school for Saturday Night Live.” Four years later she was brought to the attention of producer Lorne Michaels and became SNL’s longest-tenured female cast member before leaving in 2007. Her skin tone and elastic voice let Rudolph play adolescent girls, sex-starved man hunters, black R&B singers, Latina newswomen, and of course, a blond Italian T. rex. She created characters with the precision of Hartman and invested them with the intensity of Will Ferrell. “All I wanted to do was Saturday Night,” says Rudolph, “but it just became too difficult with a child.”

Rudolph had small roles in films before Away We Go. She played an office assistant in Mike White’s Chuck & Buck and was cast as a harried stage manager in Robert Altman’s final film, A Prairie Home Companion. Altman had become very sick before shooting could begin and was told by the studio that his film could not be insured unless he found a backup director to continue filming should he become incapacitated.

“Bob called up Paul,” says Rudolph, “and said, ‘I want you to do this movie with me in case I die.’ They already loved each other very much, and it was more like family being on the set.” Garrison Keillor wrote Rudolph’s pregnancy into the script, and Anderson fetched pizzas for her when he wasn’t helping Altman. “Sometimes he would literally be Bob’s feet,” says Rudolph. Altman, who was 80, died not long after the movie’s release. Anderson dedicated There Will Be Blood to the director, but first he and Rudolph had a daughter. “I remember when we came home from the hospital,” says Rudolph. “We looked at each other and said, ‘You mean there isn’t going to be a parent here to take care of us? We’re in charge now?’ It sucks to be a new mom and not have a mom.”

Away We Go is about that moment—when two people are suddenly responsible for another for the first time. Everywhere Burt and Verona travel—Phoenix, Madison, Montreal—they’re confronted by parents who can’t stop themselves from telling the couple what to do. “The film,” says Rudolph, “felt exactly right from what I remembered after I became a billboard for pregnancy. What I took from that experience was People are fucking nuts out there! Burt and Verona have all these shitty experiences with parents”—played by, among others, Allison Janney and Maggie Gyllenhaal—“but that was my life when pregnant.”

Rudolph stops talking. A squirrel tensed to pounce has caught her eye. “Are you kidding me? Get out of here!” she says. Things are quiet, and then Rudolph says, “Wait a minute–I don’t see any balls on that squirrel. I think I see boobies! Even this is connected to the movie.”