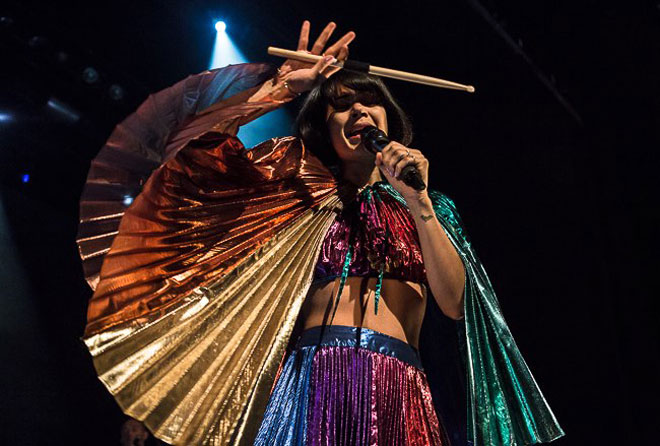 Natasha Khan is an enigmatic figure. Better known by her stage name, Bat for Lashes, her music is a haunting blend of dreamy, often danceable pop while her voice is calm, confident, and transporting. Speak to her off stage and what immediately becomes un-mysterious is that Khan’s commercial success is the byproduct of a drive to make art for its own sake.

Tonight, the British-born musician brings her acclaimed third album, The Haunted Man, to the Fonda Theatre.

The record finds Khan getting up close and personal with her audience, paring down her musical style, and drawing controversy because of the “explicit” album cover. The black and white image features a naked, makeup-free Khan supporting a nude man draped over her shoulders with both positioned to cover their naughty bits. Chatting with us before a sound-check between Coachella weekends, Khan discusses her affection for music like the Cure and Lou Reed, being compared to groundbreaking musicians like Kate Bush and Björk, and her surprise about the album cover fracas in an industry that routinely sexualizes female performers.

How was the first weekend of Coachella?
It was great. I think we played a good set. It’s hard because you don’t get to sound check and you get thrown on stage. After the first song, I think we got it down. The audience was absolutely lovely. They went crazy for it and we had a really good time. It’s so nice to be in the sun with palm trees around! It’s very different from Glastonbury or other festivals back in England.

What was it in that pushed you toward music?
I decided to do music when I was about 20 years old. Before that, I sang in my bedroom and wrote guitar-y songs. When I was 9 or 10, or even before that, I was making piano compositions and taping those on my cassette player. I suppose I was always making music or writing music, but I didn’t consciously think it was something I could do until quite a bit later on. There’s no one that does music or art in my family, but there’s a lot of people who love music. My mum’s a huge music fan — Motown, Michael Jackson, Prince, Fleetwood Mac, Neil Young, Joni Mitchell — all that good stuff. So, music was always in our house and we were always singing.

People often say your music has hints of everyone: Björk, PJ Harvey, Kate Bush, Tori Amos, Fiona Apple. Were any of those women influential for you?
When I was 12 or 13, my older cousin came to live with us for a few years. She brought along Carole King’s Tapestry, Björk’s Debut, Kate Bush’s Hounds of Love, Tracy Chapman, and some other things. We’d play Monopoly late at night and listen to those things. It completely inspired me. It felt very familiar and I guess the sounds just made sense. Those women have definitely been reference points. At the same time, I’ve been equally influenced by a lot of male musicians like Robert Smith of the Cure, who’s just as big an influence as Björk. Lou Reed is just as big an influence as Joni Mitchell. It’s funny when people compare me to female musicians because a huge amount of my record collection is male musicians from bands, as well.

Those comparisons are interesting because you cover songs by The Cure and Depeche Mode.
Exactly. That’s because I love them. When I was a teenager, I listened to all The Cure’s albums and me and my boyfriend followed them around, wherever we could see them play. I love Neil Young’s Harvest and Lou Reed’s Berlin. I’ve covered Bruce Springsteen, Neil Young, Depeche Mode, The Cure, Radiohead, David Bowie as well as Nina Simone. I suppose I do get compared to the same people often but my own music taste is rather eclectic. Vocally, Jeff Buckley is a huge influence and inspiration.

On previous albums, you had more creative tools around you. The Haunted Man is much more stripped down and intimate. What was your thought process heading into this record?
I didn’t want to repeat myself. I’d progressed as a person and was thinking about deeper, more intimate things. More emotional intimacy. It felt good to strip away all that regalia and adornment, which I still love, and present myself from a different angle. Yeah, there were more symbols and metaphors and archetypal characters on the last record. It was so colorful. This record was much more formed by the art and dance worlds. It was that choice to be upfront and bold and step back and be more raw. I love the rawness of real bodies.

Were you ever worried that the style wouldn’t translate without the larger concepts cloaking you?
I suppose that was a thought, but the music is magical anyway without having to tell people. Especially now, we’re playing all these songs [from The Haunted Man] live and they have a color and visual imagery and sumptuousness and sensuality. I think the work stands upon itself. No, I wasn’t really worried. I was excited to see how that translated and to see the discussions that followed, which I think have been relevant to the music world and to how women are presented. It’s been a much more interesting discussion than what would’ve resulted from just doing another magical cover.

The album cover has been a springboard for discussion. The “controversy” was odd because you deliberately chose a pose that wasn’t particularly suggestive by today’s standards.
The original reason I did it was for the art of it. For me, it’s all about the close personal relationship with the men in my life and how I present them on the record. That’s what I was thinking about. When it came out, I really wasn’t anticipating all that discussion, but the fact that it happened was not something I wanted to shy away from. I thought it was interesting and exciting that people cared that much. It brought a lot of questions about women and presenting them in the nude form.

The lack of Photoshop in an industry awash with heavily retouched imagery was a refreshing statement.
Thank you. I don’t like all that airbrushing. It’s such a shame. You really miss out on the beauty of real bodies, no matter what shape or size they are. To make them look all glossy and make everything about sex is really boring.

You overcame a bout of writer’s block before you began writing The Haunted Man. What got you to that point?
Being overtired and overworked. Traveling all over the world but not really having a base. The natural conclusion to working hard is getting tired. Time got me through it. Being kind to myself — cooking, gardening, putting around at home, being quiet, seeing good friends and family, and doing creative things that weren’t music so I didn’t have so much pressure. I joined a life-drawing class, did some illustrations for children’s books, pottery, dance. Staying active and creative but not necessarily worrying about music all the time.