Home Uncategorized Barbie Has a New Anthem and it Makes the Spice Girls Sound... 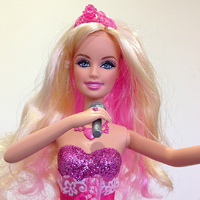 It’s 2014 and Barbara Millicent Roberts—the world’s favorite Midwestern doll with impossible proportions and permanently glued-on underwear—has a new theme song. If you’re a fan of Rebecca Black’s oeuvre, you should enjoy the anthem.

Channeling the Spice Girls, Icona Pop, and every possible meaning of “girl power,” Fifth Harmony’s “Anything Is Possible” is a song of empowerment for young girls. It’s also the Barbie brand tagline.

In the lyric video, images of high heels and blow dryers float by as the uber-twee girl group, which was put together by Simon Cowell on the second season of The X Factor, tells their audience they can be “anything they want to be.” Except a healthy weight or able to frown.

Warning: If you play “Anything Is Possible” around your 6-year-old, there’s a good chance it will become your household’s most-played jam of 2014. That’s what it was designed to do. Theme songs, especially ones for products and shows targeting kids are meant to be earworms, the sort of songs you can’t get out of your head long after you want to. If Mattel really wants to bring Barbie into this millennium, we recommend a theme song by Rihanna or Lady Gaga or Taylor Swift. And if Barbie wants to really prove her chops, how about an American Idol-style sing-off against the animated musical heroines of years past. We’re betting on Jem and Holograms.