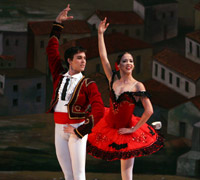 The star of Don Quixote, the famous 17th-century Spanish novel by Cervantes, may be a noble knight, but Anette Delgado stole the show from the title character last week as she performed the role of Kitri with the Ballet Nacional de Cuba at the Music Center. Her lightning-quick footwork and classical form were spot-on from the moment she took the stage in a vibrant red dress, flirting with a love interest behind her father’s back. To the end, when she won her suitor’s heart, she exuded the right dose of Latin fire and intensity we’d hoped to find.

The Cuban company was in town for a five-performance run—its first at this venue—and it did not disappoint. Founder-artistic director Alicia Alonso choreographed this version of the ballet, which premiered in 1988 in Havana and is based on the original by Marius Petipa. It’s a three-act program filled with romantic intrigue, battle scenes, brilliant costumes, and a beautiful set (including a gigantic screen of botanical and animal motifs inspired by the Spanish artist Goya). In other words, a splashy piece of entertainment—with the usual tropes, the storybook look, the gravity-defying lifts and spins—to wow an American audience? Well, yes. But the production also is full of sincerity and soul: The precision and graceful movement are there, but so is a spirit of joyfulness and warmth.

On opening night this energy was most apparent in Delgado’s solos, which were exquisite. She was ably partnered by Dani Hernández, who matched her springlike steps. (On the other hand, her talent stood in sharp relief to the more plodding, less agile Veronica Córveas, who played the secondary female lead of Mercedes.) In terms of sheer fun, it was impossible not to admire the gypsies’ colorful patchwork outfits in Act 2 or the pantomime humor of Act 3. Credit for the lively mood also goes to the L.A. Opera Orchestra, whose use of castanets and tambourines reminded us of the cultural setting and aided the story line. Look for other examples of international flavor as the 2011/2012 season of Glorya Kaufman Presents Dance at the Music Center continues with the Scottish Ballet, the Bolshoi Ballet, and more.