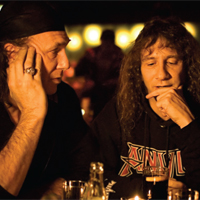 The heartbreaking yet endearing Anvil! The Story of Anvil not only won Best Documentary at the 2010 Independent Spirit Awards, but it brought fiftysomething singer-guitarist Steve “Lips” Kudlow and drummer Robb Reiner the renown that had eluded them for more than three decades. After the film’s success, the musicians were able to leave their day jobs, and they now tour full-time for legions of aging metal fans and young hipsters. “People are saying, ‘How could we ever have overlooked these guys?’ ” Reiner reports. “They’re getting Anvil-ized.”