Home Uncategorized Back to the Bowl 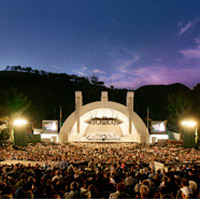 If the nearly-in-the-nineties temperatures haven’t convinced you it’s practically summer, this will: The Hollywood Bowl hosted a cocktail party celebrating the launch of their 90th (yes 90th, you read that correctly) season last night. Waiters circled the small crowd of LA Phil supporters and associates with trays filled with sangria and purple potato empanadas by Patina, then music director Gustavo Dudamel, looking just the teensiest bit tired (he’s got a newborn at home), talked up Youth Orchestra Los Angeles and the upcoming season’s programs.  “We are doing crazy things,” he said with a boyish smile. It’s true, the Los Angeles Philharmonic is shaking things up, adding works like Puccini’s Turandot to the mix this year. For a preview—or to feel just a little closer to a warm night spent under the stars—listen to this Hollywood Bowl Summer Series Playlist put together by the LA Phil.

Singe tickets go on sale online and at the Hollywood Bowl Box Office on Saturday, May 7.