Home Uncategorized Back on the Scene: Like Her New Album, Joan Jett Remains “Unvarnished” 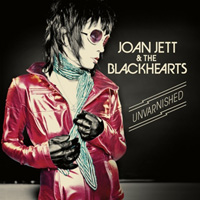 Call it the seven-year itch. Joan Jett & The Blackhearts are geared up for the release of their first album of original music in seven years. Unvarnished, which features 10 new songs plus four demo tracks on the deluxe edition, comes out today. It’s been a big summer for the rocker. In July, the book Queens of Noise: The Real Story of The Runaways came out, West Hollywood declared August 1st “Joan Jett Day,” and Jett was honored at this year’s Sunset Strip Music Festival with a VIP tribute ceremony.

Filled with the straight-ahead rock and roll that Jett is known for, Unvarnished won’t disappoint longtime fans. The first single, “Any Weather,” is a melodic love song with a memorable chorus. It was co-written by Dave Grohl, one of many collaborators on the album. On various songs, Jett tackles themes as diverse as bullying, the aftermath of Hurricane Sandy, social media over-sharing, and death, most notably the loss of her father in 2007 and her mother in 2010. Jett has described it as the most autobiographical material of her career.

Performing for nearly four decades, Jett has managed to stay true to the sound that she forged as a guitar-wielding teenager in The Runaways. We saw her perform at a private event last year and were taken aback; she was as fresh and vital as she was in the 1980s without any of the torpor of nostalgia. She even got the stiff crowd out of their seats. If that isn’t a testament to what it means to be a rock ‘n roll icon, what is?