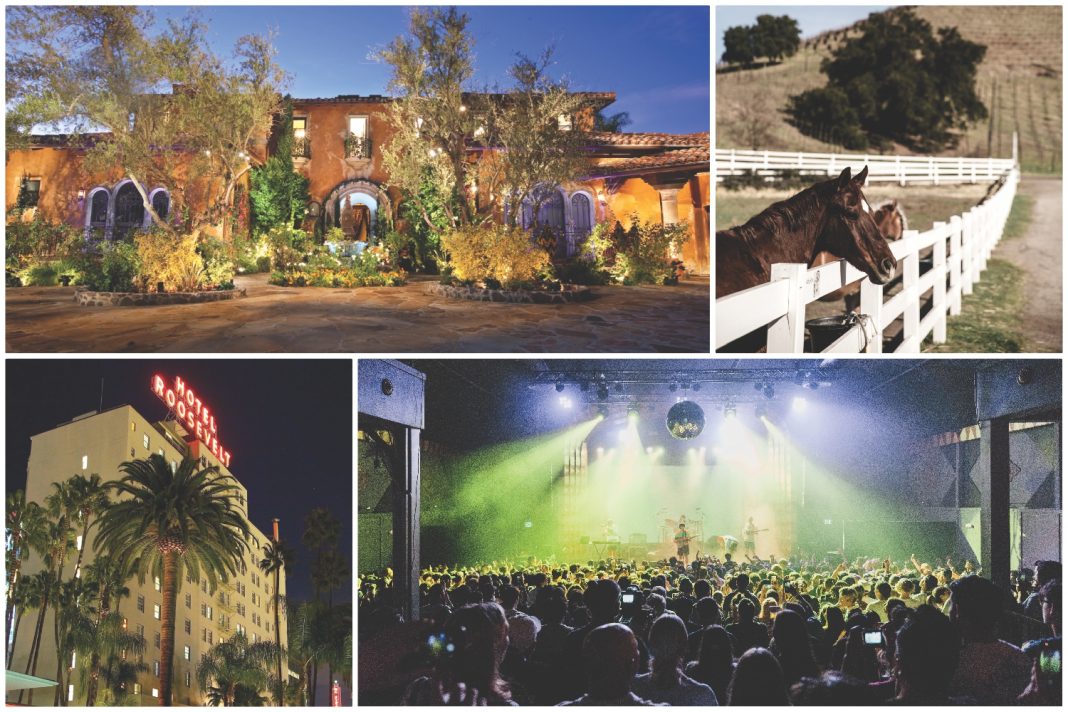 ABC’s The Bachelor (season 23 premieres January 7) loves Los Angeles almost as much as it loves love. Try to hit up some of the series’s most memorable as-seen-on-TV haunts before leading man Colton Underwood gives out the final rose.

The 10,000-square-foot Agoura Hills pad, known as Villa de la Vina, has been Bachelor HQ since Brad Womack’s season in 2007 (save for season 8 of The Bachelorette, which was filmed in Emily Maynard’s hometown of Charlotte, North Carolina). A family lives at the estate in the show’s off months, but feel free to drive by and snap a pic. 2351 Kanan Rd., Agoura Hills.

Do like Sean and Lesley and stop at the Guinness World Records Museum—where they earned the title for world’s longest onscreen kiss—before cruising to the storied hotel for a nightcap. The duo stole a much shorter smooch on the private (but bookable!) rooftop; on an average weeknight, you’ll want to sip craft cocktails and practice your bowling game at one of two in-house lanes at the Spare Room lounge. 7000 Hollywood Blvd., Hollywood.

The same hotel that housed the Munchkins during the filming of The Wizard of Oz got some screen time during JoJo’s swing-dancing date with fan favorite (but no JoJo favorite) James. Pop in to do a little dancing of your own: Live bands perform gypsy swing, klezmer music, and more nightly in the Grand Lobby. 9400 Culver Blvd., Culver City.

The words “I’ve got one more surprise for you” can mean only one thing in the Bachelor universe: a private musical performance so intimate that it borders on uncomfortable. Ben took Caila to the DTLA theater for a quick show with Amos Lee; scope out the Regent’s calendar for a schedule of upcoming concerts that you can catch with, mercifully, hundreds of other people. 448 S. Main St., downtown.

When it comes to the prototypical must-haves on dating checklists—including Kaitlyn’s—a sense of humor never fails to rank high. Despite a brief tutorial from comedian Amy Schumer, the saps on this group date all bombed on stage while trying to impress Kaitlyn with their wit. Thankfully all that’s required of you is kicking back in the audience and leaving the laughs to the pros. 8162 Melrose Ave., Hollywood.

In what has become a particularly contentious episode among fans in Bachelor Nation (Was it staged? Was it not?), Prince Farming and Whitney, who eventually became Soules’s last woman standing, crash a real couple’s wedding reception at the picturesque Malibu locale. The Woolsey fire did some damage to the property last year, which led to closures; check malibuwines.com for updates on when the site will reopen. 32111 Mulholland Hwy., Malibu.

The date: Nick finally got to give out roses instead of receive them on his headlining season (his fourth televised attempt at finding love—he was the runner-up on Andi Dorfman and Kaitlyn Bristowe’s seasons of The Bachelorette and a contestant on spinoff series Bachelor in Paradise). After taking a zero-gravity flight—one that made Vanessa puke—the pair enjoyed an quiet evening atop the U.S. Bank Tower. Pay a visit for panoramic views of the city, or brave the Skyslide, the 45-foot-long glass chute attached to the building’s exterior. 633 W. 5th St., Ste. 840, downtown.

RELATED: 8 Signs a Bachelor Contestant Is Losing It