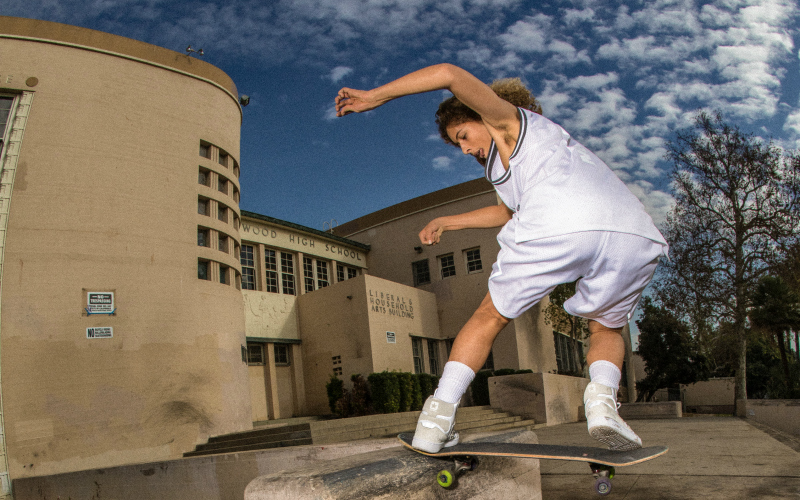 Hollywood-based Babylon is a skate fashion brand on a mission. The company’s founders, Lee Spielman and Garrett Stevenson, formed the punk band Trash Talk together in 2005. A decade later, they put the lessons they learned as DIY musicians into launching Babylon. Motivating the project was a desire to go beyond just selling cool stuff and instead use the brand as a platform to build a community.

To Spielman, music and skateboarding both offered forms of release from the daily struggles of teenage life. Now Babylon gives him a way to make that accessible to a diverse group of young people. The shop itself, located near the corner of Highland and Fountain, operates more as a clubhouse than a traditional boutique. There’s a skate bowl, open for anybody to use, space for hosting small concerts or movie screenings, and tables and benches for kids to just hang out, make friends, pursue their creative interests, and, as Spielman notes, avoid trouble.

While they may have a positive message, there’s nothing hokey or uncool about Babylon. The brand has collaborated with partners from Budweiser to King Krule on design projects, and their clothing and shoes sell in hip streetwear shops like Bodega. This month, they were tapped by Converse to contribute a capsule collection, along with fellow Los Angeles designers Rokit, RSVP Gallery, and CLOT. Each team was tasked with channelling distinctly L.A. vibes into their takes on vintage-inspired Converse basketball shoe silhouettes, and some exclusive garments to complete the looks. Babylon’s limited-edition pieces, now on sale, include reflective silver trims, velour, and off-white suede.

As the Converse collection drops, we spoke with Spielman about finding inspiration in his slice of Hollywood, and why he makes a point of avoiding all the “cool guy shit” that can come with launching a fashion brand.

Can you give us a little background on launching the brand, and the transition from music to fashion?

Babylon started in 2015 as an extension of what we have been doing for about a decade. We wanted to take all of the things that we love and roll them up into one place. There wasn’t really much of a transition, more just us doing what we have always done. My partner Garrett and I have been making clothes, limited records, zines, etc., for years through the band, so Babylon is kinda like that, but presented on a larger scale, and not just specifically to people that listen to our music.

What would you say is the importance of creating both cultural communities and physical spaces for people, particularly young people, to connect?

I find physical spaces to be very important for brands nowadays. Kids need a place where they can go and be creative, a place where they can bounce ideas off of like-minded peers. For me growing up that was punk venues and shows where I would meet kids who were into the same stuff as me. Some of those people I met over a decade ago are still some of my best friends to this day. With Babylon, we are trying to do that in a sense. Create a space where kids can be themselves, and hopefully learn from what we set up, take that momentum, and go create their own version of it for their people. It’s important to have a place like that. I think it also keeps a lot of kids from doing dumb shit and getting into trouble. You don’t need to go do a bunch of bad shit that’s gonna get you in trouble. You can just come here and skate instead.

Do you feel like you’re protecting something essential to the L.A. spirit with this DIY skate culture kind of space?

Yes. 100 percent. I think L.A. can be a bit full of itself sometimes. Everyone thinks they are cool and they deserve this or that. Sometimes I feel like people legit forget to just stop and enjoy themselves. With Babylon, we have decided since day one to throw all that cool guy shit out the window. You can come inside of our spot and hang, skate, or do whatever, as long as you’re not being an idiot. No one is better than anyone else inside of our walls. I think that aspect of community is super important, especially in this day and age where the internet is king and people are jumping over each other for followers. Fuck all that. Come here and be yourself. We are equal here. The response has been rad. The kids who come to Babylon protect it as it is their own. This place is just as much theirs as it is ours, and they understand that.

Tell us a little about your new collaboration with Converse. Since this collection is inspired by the style of Los Angeles, how did you channel that idea into your capsule for the brand?

We have had a really good relationship with Converse for a couple years now. They have always supported us and our crazy ideas. I’m very grateful for that. Working with them is amazing because it is such a classic brand, and with Babylon we are really into taking the classics and putting our own spin on it. With this capsule we shot the lookbook at Hollywood High School, which is about two blocks away from our store. A lot of kids who come to our spot take the train there from all over the place, South Central, the Valley, etc. Everyone exits at Hollywood/Highland. To get to Babylon you legit have to pass Hollywood High on your way from the train. In a way, that almost makes Hollywood High some sort of gateway to our shop. I thought it was really cool to do the lookbook there because of that, and also growing up, the Hollywood High stair-sets were such an iconic skate spot. I would see them in every video and magazine. It’s a skate spot that kids from around the world see and recognize immediately, so having Atiba Jefferson shoot the photos there at that specific spot somewhat rounded it all off.